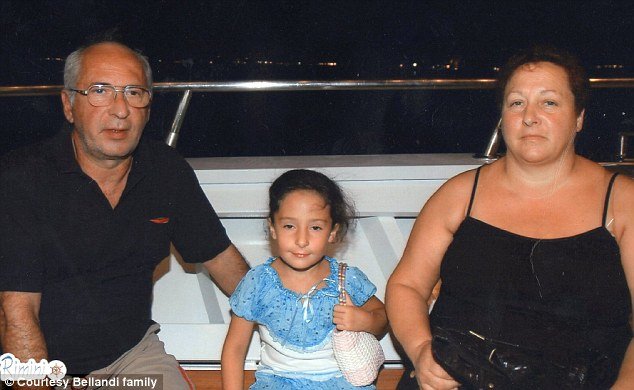 Elisa grew up, as the article in the Daily Mail states, knowing that she was unwanted. But her dad now describes her as "smart and beautiful."

November 23, 2015 (UnmaskingChoice) — It’s a strange story and, as both the Daily Mail and Metro put it, it starts with a woman “accidentally falling pregnant.” (Speaking of strange, I’m not sure I understand that phrase. How exactly do you “accidentally” fall pregnant? I mean, isn’t there a simple, biological explanation for how that happens? And in this case, involving a married couple who already had a son, surely they understood how these things work.)

Anyway, accident or no accident, this couple, Giuseppe and Aurora Bellandi, were given the news that they were pregnant in 2000. Their situation is pretty much a list of pro-choice reasons to get an abortion: health, age, economic difficulty. Aurora was forty-three, the family was not in a good financial situation and due to a condition called ovarian fibroma, Aurora was told that she needed to abort her pre-born child.

There are many ways to look at the situation the Bellandi’s are in, but none of them should include a wish for a dead baby rather than a healthy fourteen-year-old girl.

The couple consented, but not without sorrow. The abortion failed, and Aurora discovered that she was still pregnant. What they considered unfortunate, but was fortunate for their daughter, was that Aurora was more than twenty-one weeks pregnant when they made this discovery — past the point that abortions are permitted in Italy. A difficult pregnancy and complicated birth brought little Elisa Bellandi into the outside world. She grew up knowing that she wasn’t supposed to happen, that she was an ‘accident’, and that she had survived an attempt on her life.

She grew up, as the article in the Daily Mail states, knowing that she was unwanted.

Now her parents, who have already won a lawsuit against their hospital in 2008 for physical damage to the mother, have launched another lawsuit for the maintenance of their daughter. As her father declared: “The mistake wasn’t mine – so it’s not fair that I pay.”

There is no denying that the family has fallen into really difficult times. Aurora is in the advanced stages of Parkinsons disease, and Giuseppe has been out of work for five years. They claim that they love their daughter — she also says that she has always felt loved — but that they couldn’t afford to care for her, they had an abortion, and therefore the doctors should bear the financial burden of their failure to do away with Elisa.

Giuseppe claims that he needs the money for his daughter’s sake, not his. He wants to be able to send her to university, to let her experiment in fashion like her friends. The doctors brought her into the world, he explains, and while he sees his daughter as a gift now, he always knew that he couldn’t provide her with a decent life.

It’s a confusing story, to say the least. A couple that wanted an abortion but didn’t, doctors that performed an abortion but didn’t, a child loved but unwanted, a gift but a burden. Giuseppe declared that: “She (his daughter) is a smart, beautiful girl. She is a leader among her friends. She is not the problem. They (the doctors) are the problem.”

She isn’t of course, and neither are the doctors. No one could possibly deny that the Bellandi’s circumstances are difficult and in some areas tragic. But the doctors did not bring Elisa into this world as Giuseppe claims. Whether or not they were planning to have a child, whether or not it was easy or difficult for them to have a child at that point, he and his wife engaged in a reproductive act that resulted in them reproducing.

Elisa isn’t the problem, even as it isn’t difficult to sympathize with the situation Giuseppe and Aurora have found themselves in. In fact, they themselves have identified one of the problems: the fact that doctors told them to have an abortion in the first place. The time of adhering to the Hippocratic oath is clearly in the past, as doctors no longer try to preserve the lives of all of their patients. Instead of offering support and real solutions to medical difficulty, the doctors told the Bellandi’s that killing their pre-born daughter was their only choice. It wasn’t, obviously, and the trauma that the failed abortion brought on the family was the last thing they needed in their situation.

But there’s another problem here, and it lies with perspective. The whole passing around the blame thing clearly isn’t great. I mean, whose fault is it? The Bellandi’s for conceiving Elisa, the doctors for failing to kill her, or Elisa’s for—I don’t know—existing? The idea that there is fault in this scenario is ridiculous. Elisa is here, and, as her father proudly declared, she is beautiful. The problem lies with perspective, the twisted perspective with which the twenty-first century has burdened us all. In the past the idea of killing Elisa would have been rejected instantaneously, and the doctors would have laboured to make Aurora as comfortable as possible both for her sake and her pre-born child’s. In the past we cared about both people, we valued both people.

There are many ways to look at the situation the Bellandi’s are in, but none of them should include a wish for a dead baby rather than a healthy fourteen-year-old girl. There are several tragic elements to this story, the worst being that Elisa, a young teenager, has to defend her parents claim that life would have been easier—life would have been better—without her.