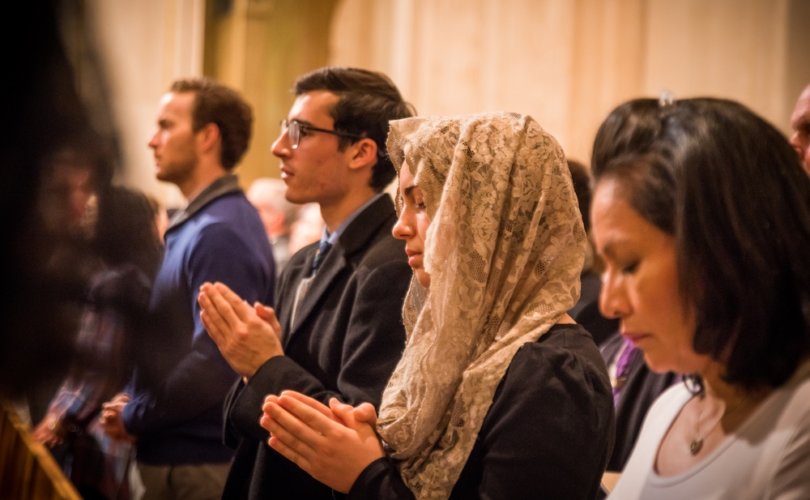 Young Catholics pray at a Solemn High Pontifical Latin Mass at the Basilica of the National Shrine of the Immaculate Conception in Washington, D.C. on November 16, 2019. Archbishop Salvatore Cordileone offered the Mass.Jim Hale / LifeSiteNews

Yet we have heard all too often in recent years that conservative Catholics, including those who attend the Latin Mass, are “too rigid.” It has been reported that masculine and devout men who attended seminaries in years past,and who complained about the prevalence of homosexual practices there were also accused of being “too rigid” and were therefore asked to leave.

It appears that for the liberals in the Church, “rigidity” is synonymous with orthodoxy. Therefore, anyone who advocates for strict adherence to Catholic doctrine, particularly on matters of sexual morality, is “too rigid.” Yet Our Lord, who said in recent Mass readings that a man who even looks at a woman lustfully has committed adultery with her in his heart — went beyond the strict dictates of the law. That would obviously make Him “too rigid” by the standards of modern liberal morality.

Of course, while keeping faithful to the law, our Lord never elevated form over substance. So he had no problem healing people on the Sabbath. But that is because it was always a distortion of the commandment to honor the Sabbath to interpret it to prohibit acts of charity. Therefore, when liberals in the Church seek to misuse the manifest mercy of Christ as an excuse for their moral laxity, they are undermining His commandments.

Our Lord said that “if you love me you will keep my commandments” (Jn. 14:15). So where does that leave those like Fr. James Martin who advocate to change the teachings of the Church with respect to homosexuality? And what do our Lord’s statements about the harsh reality of Gehenna in the Gospel say about those who question whether anyone goes to Hell, if Hell exists at all? How can they square those beliefs with the teachings of Jesus and his disciplines? The answer is that they cannot.

Liberal clerics have abdicated the moral authority of their office by rejecting the magisterial teachings of the Church that it is their job to honor. They have sought to replace fidelity to the commandments with a false fidelity to “social justice” issues like climate change. In doing so, they have even downplayed the pre-eminent importance of human life itself and the intrinsic evils of abortion and same-sex “marriage.”

Issues like climate change are merely a smokescreen for liberal Catholics who are shills for the Democratic party — the party of death and sexual anarchy. These turncoat Catholics have aligned themselves with the political party that categorically rejects the sanctity of pre-born life and the institution of marriage as ordained by God the Father and proclaimed by His Son, Our Lord Jesus Christ.

The cultural elites of all stripes that support the Democratic Party have sought to downplay, and even deny, the existence of God Himself. But that does not stop the liberal Catholics in the Church hierarchy from embracing their anti-Christian-socialist-globalist agenda. They are not “rigid” because they reject God and His commandments. Those of us who love God and His commandments are proud to consider ourselves “rigid,” especially since, by the depraved standards of liberal Catholics, so would have been our Lord and His disciples.

Charles LiMandri  is the chief counsel of the Freedom of Conscience Defense Fund (FCDF), which specializes in religious liberty cases. He is double–board certified in pre-trial practice and trial advocacy by the National Board of Trial Advocacy, and he is admitted to practice law in California; in New York; in Washington, D.C.; and before the United States Supreme Court. The FCDF website is www.FCDFlegal.org.