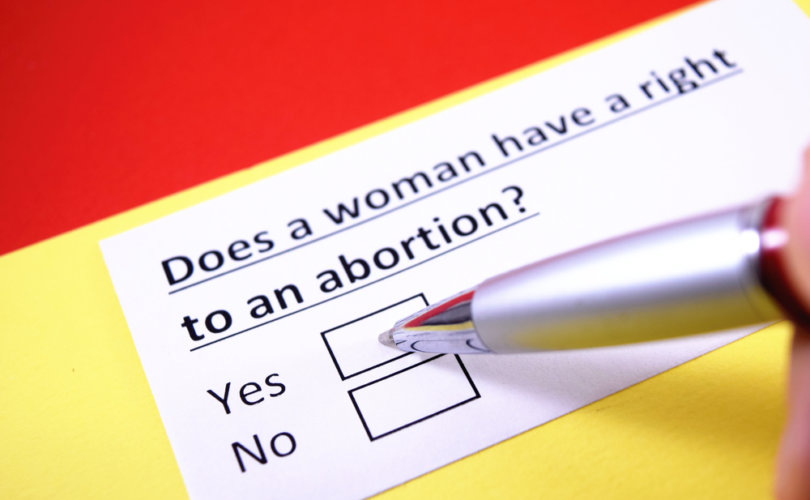 January 4, 2017 (National Right to Life News) — There has been approximately one gazillion stories of late about “fake news.” There are almost as many ways to define it as there are accounts lamenting it.

But whatever the newest iterations of false news may be, a constant over the years is that fake news blatantly misrepresents the truth or deliberately wraps what is going on in such an overwhelmingly misleading fashion as to lead the discussion to a preordained conclusion.

Enter the latest Pew poll on overturning Roe v. Wade. Here are a few thoughts about how they are recycling misleading conclusions.

#1. Headline: “About seven-in-ten Americans oppose overturning Roe v. Wade.” The question asked of respondents, we are told, was “Would you like to see the Supreme Court completely overturn its Roe versus Wade decision, or not?”

“Completely,” of course, means totally, not whether the respondent agrees with a host of limitations this side of complete reversal.

#2. But was this the actual question asked? I could not find the exact wording at Pew Research, so I went elsewhere and found it: “In 1973 the Roe versus Wade decision established a woman’s constitutional right to an abortion, at least in the first three months of pregnancy. Would you like to see the Supreme Court completely overturn its Roe versus Wade decision, or not?”

Here we are days away from the 44th anniversary of Roe and still the public is told by reputable pollsters not the truth–that Roe and its companion case Doe v. Bolton essentially established a regime of abortion on demand throughout pregnancy–but that the Roe decision “established a woman’s constitutional right to an abortion, at least in the first three months of pregnancy.” I thought that canard had finally been laid to rest at least a decade or two ago, if not more.

#3. Everything else is filler. For example, that opinions haven’t changed much, which is true on overturning Roe “completely.” However that is decidedly not true about what may someday in the not so distant future be before the Supreme Court. The Pain-Capable Unborn Child Act (which we talk about elsewhere today) is the law in 15 states and says you can’t abort kids capable of experiencing unfathomable amounts of pain as they are executed.

A national poll taken the day of the election found widespread support that extended across all demographic and geographic boundaries. For example

#4. While there has not been much change in the public’s response to this erroneously-posed question, much of the public still doesn’t know what Roe v. Wade was about (an ignorance that’s obviously not been remedied by groups such as Pew Research).

I couldn’t find the breakout this time around, but a couple of years back we were told that only 62% of the respondents knew Roe dealt with abortion, 20% didn’t know, period, and 7% thought Roe was about school desegregation! And finally

We don’t need to rehash this in depth. Let me just say this.

First Pew feeds its respondents a drastically untrue portrait of the breadth, depth, and width of Roe’s license to kill.

Then it mangles (yet again) a truth that is crystal clear in Gallup’s more recent polling. That when you ask a follow up question to generalized responses, you find that in a typical Gallup poll, there will be a total of 55% who say abortion should be illegal in all circumstances (19%) or only a few circumstances (36%).

Shame on you, again, Pew Research.