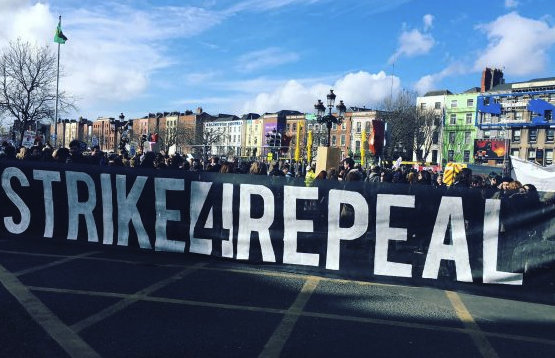 DUBLIN, Ireland, March 16, 2017 (LifeInstitute) — In the past week, the international media have rushed to report, with breathless approval, on a supposed ‘strike’ for legalised abortion which was meant to have taken place in Ireland last Wednesday.

The Huffington Post, BBC, Buzzfeed and others talked excitedly about ‘thousands going on strike’ and claimed that the country was brought to a standstill because so many people went on strike to call for repeal of the 8th amendment, Ireland’s constitutional provision which protects the right to life of both mother and preborn child.

But, of course, as everyone now knows, there’s news, and then there’s fake news. So here’s the real news.

There was no ‘strike for repeal.' It simply didn’t happen.

Instead, what happened was that an ordinary, run-of-the-mill, pro-abortion protest — attended mostly by professional campaigners and students — was dressed up as a ‘strike’ in order to create the impression that Ireland was on the verge of major unrest because people were angry with our pro-life laws.

Everyone understands what a strike is: the word has an actual meaning: it means work stoppages and industrial action. It involves people in a workplace or workplaces acting collectively and refusing to work, taking the risk of defying the wishes of their employer, and suffering a loss of pay.

However, Irish abortion campaigners, being aware that almost no one would actually support a real strike in support of legalised abortion, just asked people to ‘take a day off work’ or to ‘wear black’ or to make some vague symbolic gesture in favour of repealing the right to life of preborn babies.

Taking a day off work is not a strike. That’s the first blindingly obvious point any self-respecting journalist would have put to the organisers, but this is the mainstream media, and this is abortion, so the rule is not to ask any awkward questions, or to point out the obvious. Instead, the media all dutifully and enthusiastically wrote up the fake ‘strike’ news.

A month of free media publicity, with helpful links to websites and starting times and dates, was duly carved out for this pro-abortion day of action, with lots of (unintentionally) hilarious videos of spooky characters forecasting ruination and desolation if an abortion referendum was not granted before the Big Day Of Action on March 8th.

(Irish abortion campaigners are extraordinarily flush with cash, because of millions coming in from U.S. billionaires like Chuck Feeney and George Soros to fund the push against Ireland’s pro-life culture.)

Still, as expected by everyone who wasn’t living in a media bubble, the pretend ‘strike’ turned out to be a damb squib.

According to the Irish Times, a paper so devoted to repealing the 8th amendment that it is becoming known as the National Abortion Campaign Daily, only 1,000 people turned out at the lunchtime protest. Photographs of the gathering show that they were mostly students, and, when I was in college, skipping out of lectures was universally known as being on the doss, rather than being on strike.

The protestors assembled on O’Connell Bridge in Dublin, where roadworks were already filling most of the space, and made a half-hearted attempt to stop traffic for a short period of time. That evening, the Irish Times reported, the much-heralded march for abortion, which took place that evening in support of the pretend strike, only attracted some 2,000 people.

(Even the Irish branch of the world’s biggest abortion provider, Planned Parenthood, didn’t go on ‘strike.’ Comrades, what are you like? )

So another day, another fake news story on abortion, but there’s a change in the air that even the media are finding hard to ignore.

The most recent Edelsman Trust barometer shows that the media is distrusted globally, and in Ireland only 29 percent of people have trust in the media, an all-time low since the poll began 17 years ago.  In this instance, thanks to social media, and the evidence of their own eyes, people can see that there was no strike for abortion. And people are increasingly questioning why the media are less than honest about the strike — or about abortion in general.

That’s leading to many people looking for answers elsewhere, and so, for the past 18 months we’ve been training and organising thousands of activists to go door-to-door with us on the Life Canvass – the biggest and most effective grassroots campaign yet seen on this issue in Ireland, and we’re changing hearts and minds by sharing stories and information with ordinary people every day.

The results are making abortion campaigners and their media allies nervous, with support for full repeal of the 8th falling by a significant percentage in the past year.

We’ll keep at it, and while they are busy inventing fake news and pretend strikes, we’ll stay busy protecting mother and baby by raising up the pro-life majority to vote to save the 8th.