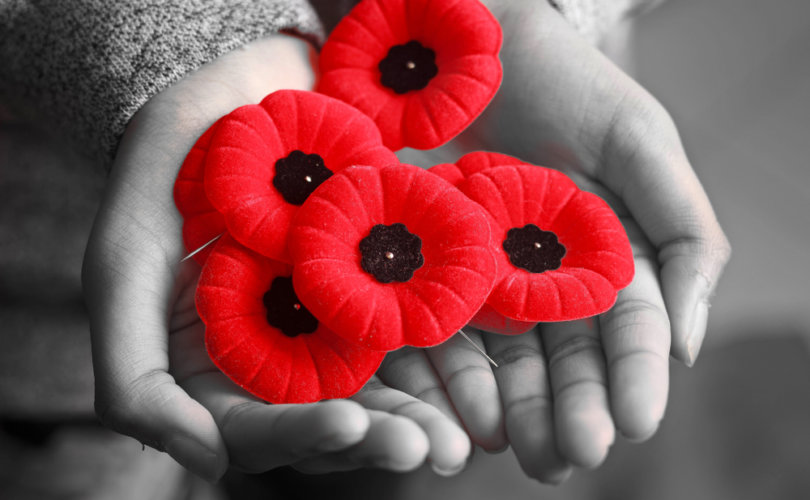 (Campaign Life Coalition) – On Remembrance Day we honor those who have given their lives in battle defending our freedoms.

I have often wondered that if these brave men and women who sacrificed their lives in the two World Wars were to see Canada as it is today, would they have been still willing to make the sacrifice?

If they could have seen that our country would legalize the slaughter of some 100,000 Canadian babies via abortion every year, would they have been so willing to lay down their own lives knowing that the freedom they fought and died for would be misused to include the “freedom to choose”?

If they could have seen that our country would legalize the killing of the sick and the elderly, our country’s treasured sources of lived experience and wisdom, would they have been willing to lay down their own lives knowing that the freedom they fought and died for would be used to allow doctors to kill these sick and elderly in the name of “autonomy”?

If they could have seen that our country would descend into a medical dictatorship where the rights and freedoms of citizens would be stripped away from them in the name of keeping them “safe,” would they have been so willing to make their ultimate sacrifice?

They fought for a country under God’s rule that valued authentic freedom, right rule of law, and democracy where citizens could pursue happiness in liberty and in peace.

As our anthem states, our brave soldiers wanted a land that God would keep “glorious and free.” They wanted a land where citizens would “stand on guard” for the Christian-based values that the country believed in and cherished.

We honor these brave dead by fighting for what they fought for.

John McCrae said it best in his poem In Flanders Fields. Speaking to all future Canadians shortly after his closest friend was killed in the fighting in World War I, McCrae wrote:

Take up our quarrel with the foe:

To you from failing hands we throw

The torch; be yours to hold it high.

If ye break faith with us who die

We shall not sleep, though poppies grow

The pro-life movement has taken up the quarrel with the foe. We’ve picked up the torch to defend the right to life of all Canadians, from conception to natural death. We will not break faith with those who died so that all Canadians could have these freedoms, those at the earliest stage of life and those near the end.

Let us remember our brave dead. Let us remember what they fought and died for. Let us take up the torch and fight for a glorious and free country that respects all human life.