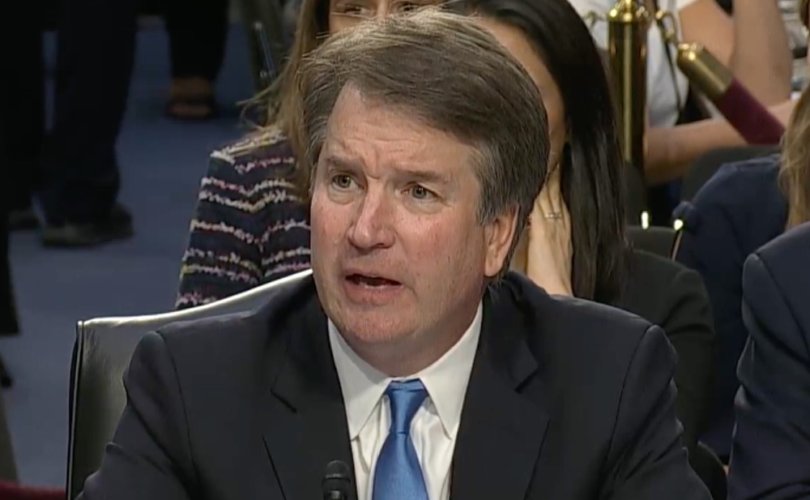 September 27, 2018 (Radiance Foundation) – History is an easy and convenient thing to forget, especially when it doesn't serve your political purpose. If you want to bring down a (conservative) man, accuse him of sexual assault. (Anti)social media will do the rest. Without any substance to stop an incredible Supreme Court nominee (Judge Brett Kavanaugh), liberals have hit below the belt. But do we find any of this surprising? The Party of Slavery, the KKK, Jim Crow, Poll Taxes, Literacy Tests, and Abortion is now the Party of #MeToo.

We're told to #BelieveSurvivors – a hashtag with the built-in premise that anyone making the claim of sexual assault is always telling the truth. The proof is merely her word. But we know from history, and present-day, that's a lie. Charges of sexual assault – rape specifically – have led to thousands of deaths through lynchings and other horrific murders of people of my complexion. It was the surefire charge that whipped hate-filled people into a frenzy.

Remember Emmett Till? He was accused of sexually harassing Carolyn Donham. Her lie led to his unimaginable death. An open casket revealed the putrid nature of a lie, of hatred, of believing a “survivor” over the self-evident truth. (I'm praying for posthumous justice in this case as the DOJ has reopened this page of history due to Donham's admission that she lied.)

You would think groups like the NAACP and the National Urban League would be sensitive to this history of fatal false allegations. Accusations of rape were a racial weapon. Yet, today, these once-great civil rights organizations are embracing unproven accusations to #StopKavanaugh. These radically pro-abortion groups should be focusing, instead, on stopping the leading killer in the black community…and no, it's not the slavery-abolishing-civil-rights-establishing GOP. Fannie Lou Hamer considered abortion to be genocide in the black community. Me, too.

But shouldn't we also #BelieveSurvivors who are men falsely accused? How about those Duke lacrosse players, dragged through national humiliation because a woman lied. Crystal Mangum accused them of raping and kidnapping her. Three young men went through hell and a national circus parading their alleged crimes without a shred of evidence. They were finally exonerated. All of those heinous and bogus charges against them were dropped. You know what happened to their accuser? She's now in prison for the second-degree murder of her boyfriend. But you know, #BelieveWomen.

By the way, Anita Hill had no evidence either.

Women lie. Men lie. People lie. Neither gender is more moral. We're all fallible. But if leftists get their way, we will all live in a dangerous society where you are guilty until proven innocent. And even then, you're never truly innocent. Accusations are forever.

Last year, Hollywood celebrities patted themselves on the back for finally coming out and joining in the chorus of accusers against predator Harvey Weinstein. Most of them should get an Oscar for feigning courage, as they chose not to risk their fame or A-list rating by daring to call out Weinstein decades ago. They could have saved countless others from his dehumanizing assaults.

Nowhere does the #BelieveSurvivors mantra ring more hollow than in Tinsel Town. Where was the #MeToo cry in the wake of Corey Haim's and Corey Feldman's exposure of pedophilia in Hollywood? What about the sexual assault survivors of former President Bill Clinton's sexcapades? #SomeSurvivorsMatter, apparently. Besides, Hollywood loves Bill Clinton, just like they love their Roman Polanski. The famed film director, by the way, drugged and raped a 13-year-old. In the immortal words of TV sage Whoopi Goldberg, it wasn't “rape rape” anyway.

Sexual abuse is abhorrent, whether the perpetrator is male or female. I have siblings who've experienced it and, thanks to adoption, were rescued from it. No one should ever exploit it. We've seen, however, how it has become the political weapon of choice. It's gotten so surreal that even Planned Parenthood, the perennial protector of predators, is demanding that the American public believe Kavanaugh's accusers. Funny, the pandering political organization has been repeatedly sued for not reporting the rape of victims (here, here, here, here and here) who've been “treated” in their abortion facilities. Perhaps the billion-dollar abortion chain should start believing survivors in their own (taxpayer-funded) glass houses, first.

According to the CDC: “In the U.S. about 1 in 3 women and nearly 1 in 6 men experienced some form of contact sexual violence during their lifetime.”

We have a dignity problem. When we don't value who we are as human beings from the moment of conception until death, anything goes. And that includes destroying political opponents by exploiting sexual abuse.

I was born as a result of a brutal sexual assault. My birthmom was raped yet courageously chose life for me and gave me the incredible gift of adoption. I'm now happily married with four children (two are adopted, too). I escaped the violence of abortion. My heart breaks when I see people wielding allegations of sexual violence with such recklessness. It trivializes real victims' pain and desensitizes our society to the evil and destructive nature of sexual assault.

There's just some intriguing irony in all of this. Judge Brett Kavanaugh is being demonized because the pro-abortion Left will do anything to protect abortion. It was a false sexual assault allegation that brought us Roe v. Wade in the first place. Jane Roe (the late Norma McCorvey) falsely claimed that she had been raped in an attempt to override Texas' abortion ban.

But triumph can always rise from tragedy. McCorvey later admitted that she lied, became a Christian, and passionately fought to abort Roe. (She also never aborted her child; she lovingly placed her for adoption.)

I'm believing that justice will triumph again, in the midst of this relentless abandonment of reason, decency, and dignity by Democrats. In the very near future, when we look back at this 11th hour sham and well-funded smear campaign, we'll be able to see how truth stopped the Left's attempt to politically lynch Justice Brett Kavanaugh.