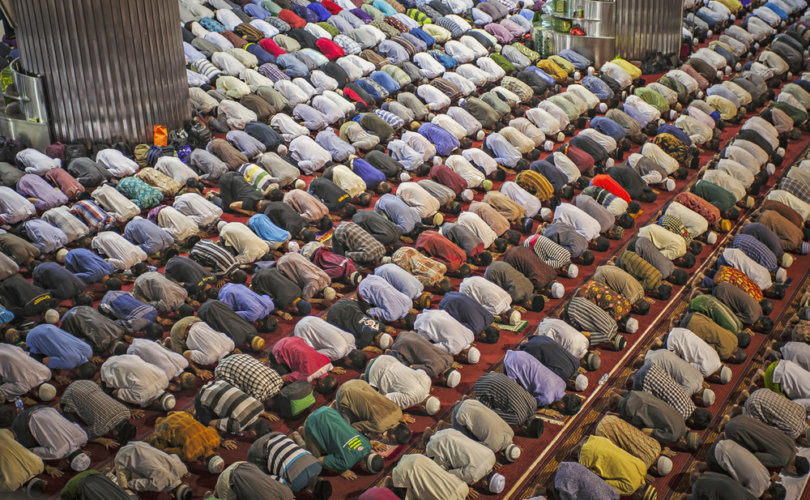 August 22, 2017 (TurningPointProject) – “If you want to see the face of Europe in 100 years, barring a miracle, look to the faces of young Muslim immigrants.” Thus said Philadelphia Archbishop Charles Chaput at a recent Napa Institute conference.

“Islam has a future because Islam believes in children,” he said. “Without a transcendent faith that makes life worth living, there’s no reason to bear children.”

Let’s stop right there for a bit of analysis. The first thing that merits scrutiny is the timeline. One hundred years from now is 2117. Most of us won’t be around then, so for many the matter will seem less urgent than, perhaps, Archbishop Chaput meant it to be seen. A number of observers of the European scene—Thilo Sarrazin, Douglas Murray, Bruce Bawer, and Mark Steyn—project that large parts of Europe will be Islamic within three or four decades. And if you were to wander by mistake into the no-go zones that surround Paris, you would think that the “faces of young Muslim immigrants” is already the face of Europe.

Timelines aside, Archbishop Chaput is basically right about the direction in which Europe is headed. And he’s right that much of the blame falls on all those Europeans who are reluctant to have children. Europe is dying, he says, because not enough Europeans have a stake in the future.

A couple of points he makes, however, might be misinterpreted. And because of the current climate in the Church, many Catholics may draw the wrong conclusions from his remarks. “Islam has a future because Islam believes in children,” he says. Moreover, “Without a transcendent faith that makes life worth living, there’s no reason to have children.”

The mistake—the fatal mistake, really—that many Catholics make is a twofold assumption: first, that Muslims believe in children in the same way that Catholics do; and, second, that the “transcendent faith” of Muslims is similar to the transcendent faith of Catholics. In fact, ever since Vatican II, Catholics have had it drilled into their heads that Islam and Catholicism have much in common. For instance, the Vatican II document Nostra Aetate emphasizes the similarities between the two faiths and glosses over the differences.

But if that’s so—if Muslims share more or less the same view of children and transcendence that Catholics do—then there’s no need to worry overmuch about the future of Europe. One could even argue that Europe would be better off in the hands of a God-fearing, faith-filled, and family-centered people than in the hands of the post-Christian secularists who now hold power.

I don’t think that’s what Archbishop Chaput had in mind. In another part of his talk, he tells young people “to love each other, get married, stay faithful to one another, have lots of children, and raise their children to be men and women of Christian character.” Still, to a Catholic of a certain universalist mindset, words like “Christian character” and “Islamic character” are practically interchangeable, as are terms such as “Christian family values” and “Muslim family values.” So, for the sake of clarity, let’s look a bit more closely at Islamic family values, and test the commonality thesis.

A good place to start is with Nonie Darwish’s new book, Wholly Different, an examination of Christian values and Islamic values. Darwish lived for thirty years in Egypt before coming to America and eventually converting to Christianity. So, to paraphrase the Joni Mitchell song, “She’s looked at faith from both sides now.”

Darwish confirms that “Islam believes in children,” but not, as she observes, for the same reason that Christians believe in children. “In Islam,” she writes, “after believing in Allah, the number one priority for a Muslim believer is not family; it is jihad.” Thus, “In several hadiths, Muhammad stressed that his fighters should ‘Marry women who are prolific’ so that Muslims will outnumber their enemies.”

Other Muslim leaders have said similar things. PLO chairman Yasser Arafat boasted “the womb of the Arab woman is my strongest weapon.” The Ayatollah Khomeini was of the same mind. “An Islamic Regime must be serious in every field,” he said, “…including the field of breeding. More Muslims means more power. More Muslims means more soldiers.” Khomeini practiced what he preached, and during his war with Iraq, he sacrificed the lives of tens of thousands of child soldiers, even using them to clear mine fields with their bodies.

The Christian view of children is that they are precious in the sight of God—important in themselves, and not just as fodder for cannons and enemy mines. The Islamic view, by contrast, is a utilitarian one. Children are important because they serve the jihad. Am I saying that every Muslim thinks this way? Of course not. But to observe that many Muslims are able to rise above this limited view of their offspring doesn’t prove anything about Islam, it simply tells us that Muslims are human.

Love is not absent in Muslim families, but, according to Darwish, family honor is a far more important value than love. A Muslim daughter who fails to dress appropriately or who keeps the wrong company, risks being beaten or even killed for the sin of bringing shame on the family honor. A Muslim wife or mother is similarly at risk. In the film The Stoning of Soraya M, which is based on a true story, it is the father and the sons who throw the first stones.

Conversely, a Muslim boy or girl who is an observant Muslim brings honor to the family. Unfortunately, according to Darwish, the single most sacred act of worship in Islam is jihad martyrdom. Accordingly, there is a strong incentive for a Muslim family to raise a martyr because his sacrifice will greatly redound to the honor of the family. This helps to explain the Palestinian penchant for training children that martyrdom (preferably achieved by killing Jews) is life’s highest calling. “My son the suicide bomber” is the Palestinian equivalent of “My son the doctor.”

So it might not be wise for Catholics to take comfort in Chaput’s statement that “Islam has a future because Islam believes in children.” Islam also believes that one of the surest ways to achieve paradise is to cut short the lives of infidels. When the mother of 19-year-old Omar al-Abed learned that her son had slashed to death three members of an Israeli family and wounded a fourth, she exclaimed: “Praise Allah. I am proud of my son. May Allah be pleased with him.”

If you are tempted to think that this is an aberration, consider that Omar’s mother has an added reason to be proud of her son. As one writer put it:

Under the Palestinian Authority’s program to pay those who commit terror attacks—sometimes called a “Pay-to-Slay” program—al-Abed’s family is reportedly slated to receive a monthly stipend of more than $3,100 in perpetuity from the Palestinian government, as a way of saying “thank you” for last week’s murders.

This brings us back to Archbishop Chaput’s comment about the importance of “a transcendent faith that makes life worth living.” Are all transcendent faiths created equal—or are there major differences? Practices such as honor violence and the “pay-to-slay” program suggest that the transcendent God of Islam is not quite the same person as the transcendent God of Christians. For one thing, he is not a father. In fact, the idea that God is a father is abhorrent to official Islam. And those who say God has a son are considered accursed. The trouble is, if there is no Heavenly Father, there is no eternal model of mercy, love, and commitment for earthly fathers to follow. It seems that dysfunctional families are the price that Muslims pay for Islam’s attenuated view of the transcendent.

For their own sake and the sake of their children, Catholics need to get over the idea that Islam and Catholicism share the same core values. Islam supposedly belongs to the Abrahamic faith tradition, but according to that tradition God stopped Abraham from sacrificing his son. But in the Islamic tradition, parents can sacrifice their daughters for the sake of family honor or sacrifice their sons for the sake of jihad—all in the confidence that Allah will be well-pleased.

As for the sons and daughters of infidels? Don’t expect a bright future for them once the “faces of young Muslim migrants” become the face of Europe. And don’t count on having a hundred years to get ready for that facial makeover.

This article originally appeared in the August 1, 2017 edition of Crisis and on TurningPointProject and is re-published with permission of the author.