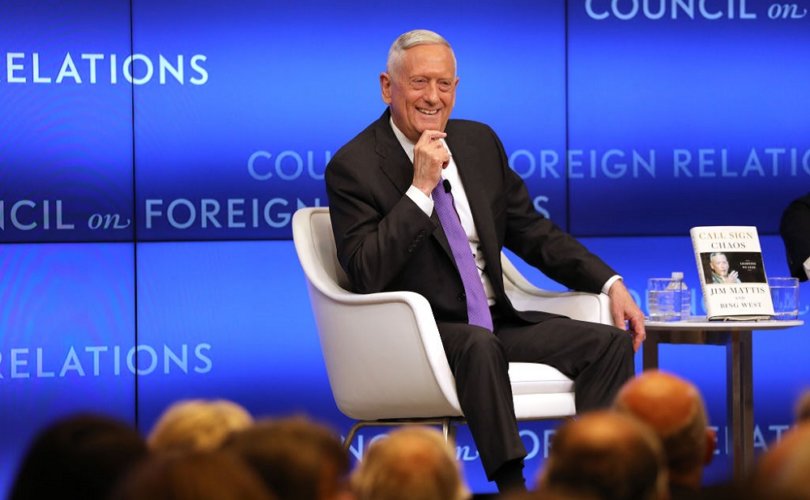 This article originally appeared at the American Thinker on September 10, 2020. It is published here with permission.

September 22, 2020 (American Thinker) — With Bob Woodward's anti-Trump book published, the media are focusing entirely on the easily debunked claim that Trump mishandled the Wuhan virus by “lying” to the American people. What the media are ignoring, however, is a much more serious claim, which is that former secretary of defense General James Mattis plotted to overthrow Trump and his administration. This fact, if true, supports my longtime fear about the damage Obama inflicted on the upper echelons of the Pentagon.

According to a pre-release excerpt from the Washington Post Bob Woodward writes about a discussion between General James Mattis and Director of National Intelligence Dan Coats about a plot to overthrow the elected government of the United States.

What do you call a conversation between the Defense Secretary and the head of the U.S. intelligence apparatus where they are talking about taking “collective action” to remove an elected President? That's called sedition[.] … A seditious conspiracy.

It began to be clear last October that the Obama administration (with some help from Bill Clinton's presidency) had seeded the Pentagon with leftist generals whose allegiance was to the Deep State, to cultural leftism, and to the infamous and profitable “military industrial complex” that Eisenhower warned about in 1961. In only five years, Obama had conducted a major Pentagon purge, firing almost 200 senior officers who held the old-fashioned belief that the military exists to protect America and should not be a social justice institution with limited firepower.

The upper-level officers who remained were hardcore Democrats. While still in the military, Admiral McRaven gave bin Laden a respectful, private burial. Once out of the military, he wrote an editorial for the New York Times, strongly suggesting a military coup against Trump. Barry McCaffrey, a Clinton White House officer, likened Trump to Mussolini because he canceled the White House's newspaper subscriptions. And Obama's Joint Chiefs vice chair, James Winnefeld, was deeply offended on behalf of ISIS terrorist Abu Bakr al-Baghdadi because Trump did the psychologically smart thing of telling al-Baghdadi's followers that he died like a coward.

In November, Sundance, at The Conservative Treehouse, pointed out that, even though Lt. Col. Alexander Vindman used back channels to counteract his commander-in-chief's foreign policy solely because Vindman disagreed with the policy, the Defense Department invited him right back to the NSC. To Sundance, there was only one takeaway: “The United States Military is collaborating with the CIA to remove a U.S. President from office.”

All of the above says there is something rotten happening in the Pentagon. The implications aren't just in the past. They're also in the future. Michael Anton has written the best article spelling out the fact that the Democrats are openly planning a coup if Biden doesn't win. One of the crucial points about this planned coup is that the Democrats have been explicit about military involvement.

Their plan in the event Trump wins in a given state is to send their Democrat electors to the Electoral College along with (or even in lieu of) the Republican electors. In the chaos that results, which will spill onto the streets, Democrats trust “that the military would take care of the rest.”

Anton also says retired military officers, such as the ones I discussed above (and I'm willing to bet that includes Mattis and McRaven), have already said that they will support a coup. I'll add that it's likely that they have allies still within the Pentagon, people who benefit from the perpetual wars that Obama, a supposed anti-war president, nevertheless fought and instigated, and who also benefit from the pipeline flowing from the Pentagon to that profitable military industrial complex.

The laughable Atlantic article about Trump disrespecting the military was intended not just to get military votes on November 3, but to get military coup participants after November 3. Critical Race Theory training and eight years of Obama's social justice policies have shifted many of the enlisted ranks from strong conservatives to equally strong Democrats.

The only way to put the kibosh on all of this is for an overwhelming Trump turnout on November 3, one that reminds Democrats no matter where they are — the media, Hollywood, the military, the defense contractors, your neighborhood — that the people are behind Trump.

As I heard someone say, the Democrats have ensured that, after the election, unless a bizarre miracle happens and Biden wins overwhelmingly on (not after) November 3, there will be upheaval. However, we know from the street battles in Democrat-run cities that, if Biden does win, the disruptions will spread. If Trump wins, the upheavals will meet the full force of the law (and due process), and America can once again get down to the business of being the best, freest nation on Earth.