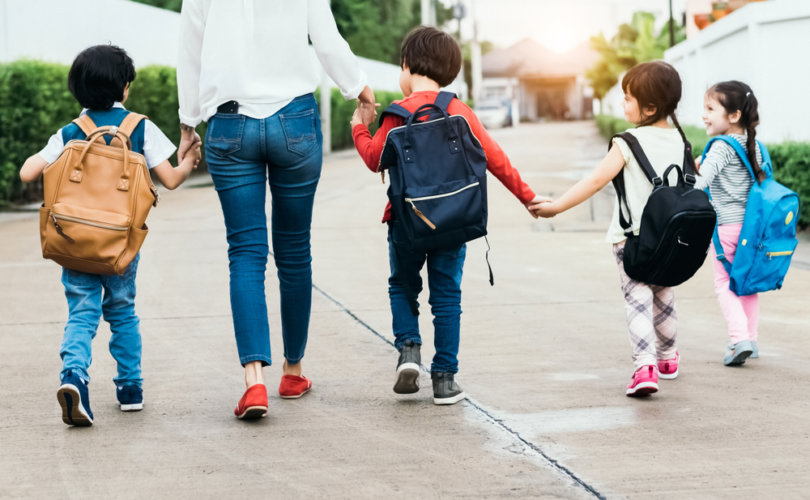 February 12, 2019 (LifeSiteNews) — The crowded Democratic presidential field is going to have one heck of a time figuring out just what sort of party it wants to be heading into its 2020 rematch with Donald Trump.

Given the radical views of their currently announced candidates, it’s not difficult to imagine a landslide victory in favor of the president. Blue-collar voters in Michigan, Ohio, and Wisconsin would resoundingly reject someone as extreme as California Senator Kamala Harris.

On the other hand, former Vice President Joe Biden, no friend to social conservatives but certainly not part of the Alexandria Ocasio-Cortez wing of the party, could enter the fray and steer it to the political center, giving the Democrats a better chance in the general election.

Whatever happens, one issue the candidates are sure to discuss is universal daycare, a policy socialist Senator Bernie Sanders tweeted support for on Sunday.

“While psychologists tell us that ages 0-4 are the most important years of human development, we have a dysfunctional childcare system which underpays staff and is too costly for working families. We need universal, publicly funded childcare,” he said.

Aside from the fact that the first nine months a baby spends in the womb (you know, before “age 0”) are also vital to development, it’s a bit odd to hear the pro-abortion Sanders call for having strangers (as opposed to a newborn’s own mom) raise a child during his or her “most important years.”

Just one year earlier at the 2012 Democratic National Convention, an Orwellian video proclaimed, “Government is the only thing we all belong to.” Delegates there also booed when references to God were reintroduced to the party’s platform.

What these slips of the mask confirm is that liberals have had for a long time the desire to indoctrinate our children at the hands of an omnicompetent, secular state.

Consider that in recent years progressives have been extremely effective at pushing their propaganda in school districts across the country. From drag queen story hours to mandatory transgender history lessons, Democrats have been relentless in making their extremist ideology part of the law. Seemingly, “get ’em while they’re young” is their motto.

So it makes perfect sense why they’d want us to hand over our children during their most crucial developmental years. Head Start already has LGBT-friendly initiatives. “Gay friendly” training sessions will surely be introduced to these innocent kids in the not so distant future.

In his tweet, Sanders linked to an op-ed that appeared in the New York Times. It was written by universal daycare advocate Katha Pollitt.

While it’s no doubt true that, as Pollitt writes, “child care is one of the biggest costs a family faces,” the reason she wants it paid for by taxpayers is anything but altruistic.“The child care crisis has a huge effect on women’s employment. It keeps women at home who need and want to work.” Universal daycare “would help more people and do more to change society for the better,” she argues. “It would allow lots of people to go to work.”

But why is that such a good thing? Thousands of years of evidence suggests most women actually don’t want to work. They prefer strong husbands who provide for them while they raise their children. Not until the past 50 or so years in all of human history have women begun working full-time. Many of them are now speaking out about how it actually makes them miserable. Go figure.

Moreover, isn’t there more to life than being a wage slave for some profit-driven corporation? Apparently not for liberals.

Remember when Chelsea Clinton, in August of 2018, boasted that Roe v. Wade was a boon to our nation’s economy? “The net, new entrance of women [into] the labor force from 1973 to 2009 added three and a half trillion dollars to our economy,” she proudly stated, seemingly forgetting that money is the root of all evil.

Ivanka Trump is also pushing women in the workforce as an unqualified good with her “Women’s Global Development and Prosperity Initiative.” This is not something pro-family activists should be enthusiastic about.

One solution to the cost of childcare could be to use the tax code to reward and/or incentivize married, stable families with children. In Hungary, for instance, anti-globalist Prime Minister Viktor Orban wants to allow families that raise four or more children to never pay income taxes again. Similar schemes in the United States could easily address the concerns raised in Politt’s article.

Feminists will scoff at such proposals, primarily because they would only reinforce the traditional, male-headed household family unit, the strongest bulwark against their Marxist ideology. And this is precisely what Pollitt does in her essay!

“Lack of child care also promotes the less quantifiable but real tendency of parenthood to turn previously egalitarian couples into gender stereotypes. He becomes the chief breadwinner, she’s responsible for children and home, and it stays that way even if she goes back to work,” she writes.

Has this woman ever met a stay-at-home mom? The most important member of any society. They’re some of the most loving, humble, joy-filled people around – not to mention many of them will tell you they love being able to stay home with their kids, and are still able to have a social life and use their professional “skills” in a number of ways.

Modern feminists are so filled with avarice, pride, and a desire to be free from the toils of childrearing that they actually believe it’s a form of liberation when a woman does what her overbearing boss demands of her in exchange for a paycheck but that it’s indentured servitude when she’s asked by her adoring husband to do something for him out of love.

Ultimately, universal daycare is a woefully inadequate and wrongheaded proposal with a malicious, socialist intent. Only when the lie of feminism is repudiated by young women and when men take up their duty of providing for their wives and sacrificing for them, just as Christ did for his bride the Church, will the issues involved with raising our children be properly addressed.