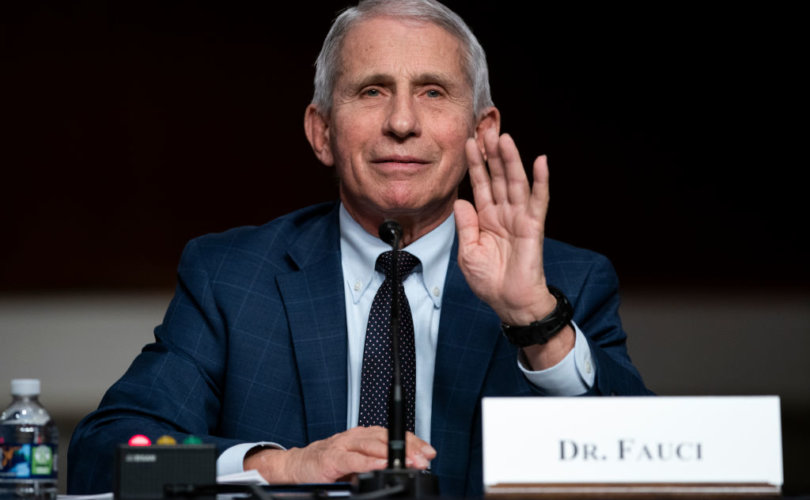 (Unmasked) – News that Dr. Anthony Fauci is finally leaving his post after what seemed like an endless reign at the helm of the National Institute of Allergy and Infectious Diseases should be a time for celebration.

Fauci has caused such tremendous damage throughout the past few years that it’s almost impossible to comprehend.

In nearly every area of life in the United States, as well as in many other parts of the world, Fauci’s influence has been a key contributor to massive amounts of human suffering.

Long after it was abundantly clear that closing schools had no significant health benefit, Fauci continued to support shutdowns and restrictions on normal life for millions of children at little to no risk from the virus.

His capacity for outright political advocacy and activism has been breathtaking to behold and contributed to the extreme collapse of trust in public health “experts” and authorities.

So it seems worth revisiting some of the greatest hits of Fauci’s reign of incompetence.

Unmasked is entirely reader supported. Paid subscriptions allow the work to continue in this format, and any readership is greatly appreciated.

Perhaps one of Fauci’s biggest and most dramatic failings has been on masks.

Early on, he famously opined on 60 Minutes that he was confident that masks didn’t work, that they might only block “a droplet or two,” but didn’t provide the protection people thought they did.

He then confirmed the same information to people privately asking for advice on whether they should wear masks when traveling.

He later absurdly claimed that his initial comments were made out of a desire to protect supply for healthcare workers. Except, of course, healthcare workers would never wear the types of cloth masking that Fauci and his allies at the CDC were recommending.

Not to mention that his claim is made even more ridiculous by the fact that he told people privately not to wear masks.

Had he believed they worked but wanted to protect limited availabilities, he could have easily told those who asked to wear a mask without jeopardizing any large scale supply for hospital workers.

Of course, that’s not what he did.

His claim that masking would lower transmission and would demonstrate clearly beneficial results compared to areas that didn’t mask has been proven false repeatedly:

Well after it had been confirmed, by copious amounts of data, that masks don’t work, Fauci continued to advocate for universal masking.

Even today, he’s remained completely steadfast that masks work, despite the conclusive evidence to the contrary.

Recently, after his incessant mask-wearing was completely ineffective at preventing him from being infected with the virus, Fauci continued to recommend people wear masks while lying about their effectiveness, saying they were “recommending people when they are in indoor congregate settings to wear a mask.”

“Those are simple, doable things that can help prevent us from having even more of a problem than we’re having right now.”

Just like the mask mandates during winter 2021–2022 were able to prevent the spread of the virus, right?

The incomprehensible amount of lying that Fauci has done over the past few years extends past masks to lockdowns and business closures and capacity restrictions.

Fauci now claims that he never said to lock down the country.

Except, of course, that’s exactly what he said on the record in 2020:

In September of 2020, Fauci claimed that states like Florida that reopened were “asking for trouble,” while praising New York for having one of the “best” responses.

His bewildering lack of awareness is bad enough, but even as late as 2021, long after lockdowns and business closures were disproven, he continued to suggest that areas that reopened were engaging in extremely risky behavior by going against his dictates.

The headline of a story out of Jacksonville in April 2021 read: “Fauci: Opening Florida for business as COVID-19 variants surge a ‘risky proposition.’”

Just a few months prior to this remark, he had pointedly criticized Florida for reopening, only to see other states that followed his advice have significantly worse results.

You’d think that being proven wrong would create some humility, uncertainty, and willingness to admit mistakes. But that’s not what Dr. Fauci does.

Instead, he doubled down, and said that Florida reopening in April 2021, months after vaccines had been available, was “risky.”

Except that California reported significantly higher rates of age-adjusted COVID mortality than Florida for all of the first and second quarters of 2021, with mask mandates and capacity limits for part of that time frame:

He pulled the same thing nationally, claiming inaccurately that the country would risk a new surge due to “relaxed” restrictions and new variants:

Remember too that Fauci claims to be the singular representative of “science.” If this is what “science” is, it clearly doesn’t deserve the respect it’s been given.

Of course, even into this year, Fauci is defending his recommendations, all evidence to the contrary, while denying that lockdowns, which permanently harmed tens of millions of people, didn’t irreparably damage anyone:

Dr. Anthony Fauci doubles down on shutdown decisions, questions studies that show lockdown states fared no better than ones that did not, and insists Covid measures didn’t “forever irreparably damage[d] anyone.”

For a supposed man of ‘science,’ he hasn’t learned a damned thing. pic.twitter.com/f8rV3xZkcS

Perhaps Fauci’s most damaging recommendations were related to schools.

Jordan Schachtel compiled perhaps the best timeline of his advocacy to keep schools closed or excuse those who wanted to keep them closed.

In his capacity as a masking fanatic, Fauci’s also promoted school masking, saying children over 2 years-of-age should be forced to mask in school if local officials decided it was necessary.

No matter how many times masking in schools is disproven, he’ll never admit these statements were baseless nonsense.

Between school closures and forced masking, the damage he’s caused to children is quite literally incalculable.

There’s also his incomparable track record of inaccuracies on what the vaccines would do.

Among many other issues, his prediction that reaching certain levels of vaccination would eliminate the potential for future surges was, like everything else he’s done, almost immediately proven wrong.

His failures in this area are endless.

Obviously this is nowhere close to a comprehensive list of the incomprehensible stupidity that Fauci’s demonstrated over the past few years. A full list would require a book, or several books to chronicle.

His incompetence, hubris, awe-inspiring ego and commitment to being wrong in every possible circumstance is quite literally incomparable.

The tremendous amount of flip-flopping and backtracking to defend his prior ineptitude is continuously defended by Fauci as “The Science™” changing.

Except the CDC guidelines he continuously defended and promoted were never based on changing science, as evidenced by the fact that they never ran high-quality randomized controlled trials to justify their decision-making.

“Science” can’t change when one of the key tenets of it, evidence-based recommendations, was never updated.

But that didn’t matter to Fauci. What mattered is endless media appearances, praise from the left, and maintaining a veneer of infallibility propped up by a fawning press.

While it might be tempting to think that this retirement will signal a dramatic shift in thinking about COVID at a federal level, that seems far too optimistic.

As with everything else COVID-related, the Biden administration has committed to ensuring that whoever replaces outgoing officials will be even worse. Ashish Jha and Rochelle Walensky are shining examples.

At the very least, there’s a glimmer of hope that Fauci will still be called before Congress and be held accountable for the damage he’s caused and for his blatant, world-altering agenda.

Reprinted with permission from Unmasked.