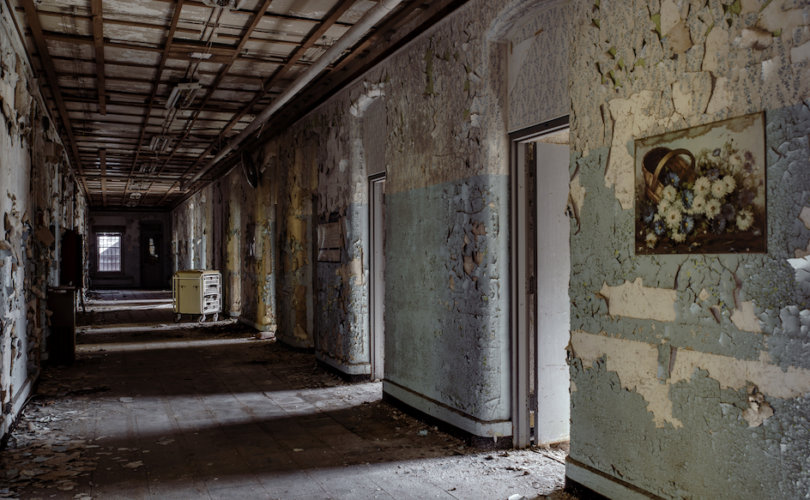 December 11, 2017 (Church of St. Michael) – As a chaplain in a state mental hospital, I quickly learned two things. First, sometimes it was easy to mistake a psychiatrist for one of the patients. Second, and more importantly, the mentally ill can be highly intelligent. If one begins with an illogical premise, one may convincingly make a fallacy seem cogent. An unfortunate man in a locked ward who thinks he is Napoleon Bonaparte can almost convince a visitor that he is there because he lost the battle of Waterloo.

Insanity is not a lack of brains; it is a lack of judgment. The Second Sunday of Advent focuses on the right use of reason, in preparation for the coming of Christ the Logos, the source of all creation. He is the Righteous Judge because he is supremely logical, and it would be a form of madness not to expect the Logos to be so.

Our society has employed cleverness to justify moral madness, rationalizing a radical overhaul of social order as “hope and change.” George Orwell anticipated this in his “doublethink” which means holding two contradictory beliefs simultaneously and accepting both of them, so that, for instance, ignorance is strength, war is peace, freedom is slavery. Currently there are those who call censored speech “freedom of speech” and redistribution of wealth “income equality,” and who varnish anarchy as “resistance.” Infanticide is responsible parenthood, infidelity is independence, decadence is progress, common sense is bias, and natural law is hate speech. When the modern moral collapse euphemized as “sexual liberation” redefined vice as freedom, defective judgment unleashed a host of contradictions, so that the very institutions that promoted libertinism affect to be scandalized when celebrities are revealed to have done precisely what the euphemizers wanted. Like Casablanca’s Captain Renault they are “Shocked! Shocked!”

“Doublethinkers” cannot cope with the consequences of their manipulation of logic. Immature students riot when a professor disagrees with them, and voters scream at the sky when an election does not go their way. Their intolerance calls itself tolerance, but it is the false kind of tolerance which, as Chesterton said, is the virtue of the man without convictions.

The same people who ask “Who am I to judge?” judge right judgment to be tactlessly judgmental, and they politicize the judiciary to appoint justices who will usurp the function of legislators. Certainly, our Lord forbids any attempt to judge the human heart or the fate of a soul (Matthew 7:2), but blurring the line between right and wrong, which the theologians call antinomianism, turns an entire culture into a raucous asylum.

“If I say to the wicked, ‘You shall surely die,’ and you give him no warning, nor speak to warn the wicked from his wicked way, in order to save his life, that wicked man shall die in his iniquity; but his blood I will require at your hand” (Ezekiel 3:18).

Reprinted with the permission of Father Rutler.