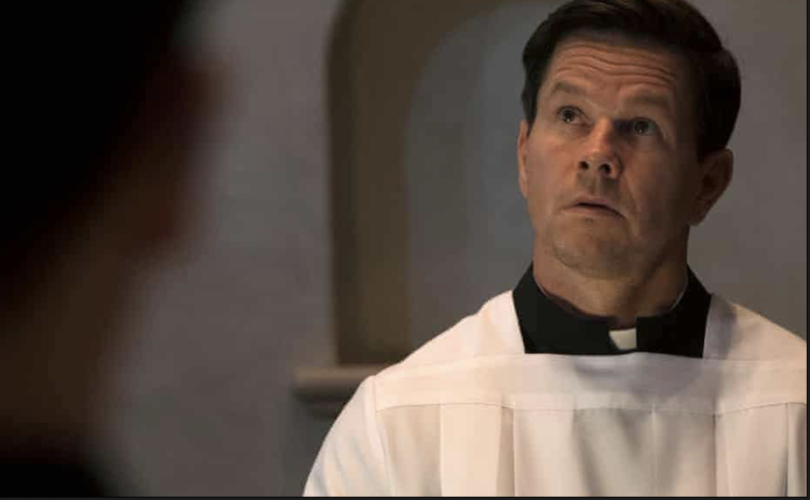 I thanked my Guardian Angel that my plan for watching it with neighbors and children were, for technological reasons, dashed. Did I tell you I hated it, at least up to a point? Let me explain.

Like you, I noticed the movie because they are advertising everywhere, on practically all Catholic websites (including this one). We went to see the Tom Holland movie Uncharted recently (don’t bother), and they showed the trailer for Father Stu. My 16-year-old daughter turned to me and said something like, “Isn’t that against the law?” meaning how did Hollywood let such a Catholic movie get produced. We looked forward to seeing it.

One of the things that crossed my mind was that at long last we were going to get something other than the usual, sappy, badly made “Christian” movie, the ones that I cannot stand. Here was Mark Wahlberg, Mel Gibson, and it was being released by a major studio.

The Catholic PR group was sending around promotional emails, and I responded. They kindly sent me a link so I could review it. I noted it was rated R. They said it was because of language. And language, oh boy, the language. Today we are used to a few f-bombs, but I was not prepared for the quite blunt vulgarity. I will get to that in a minute.

Father Stu is the unlikely story of a foul-mouthed, drunken ruffian who finds God through a woman and becomes the most unlikely of priests. What hit me sideways were two things: first, the relentless vulgarity; second, how badly much of it was written.

I will start with the unlikely dialogue that does not have the feel of reality but rather of a Hollywood screenwriter, and not a very good one at that.

The Wahlberg character is sitting in a bar next to a boozy blond. Wahlberg gazes up at a deer head mounted on the wall. The dialogue goes this way:

Woman: “Best kind of date. Bedroom eyes, keeps her mouth shut.”
Wahlberg: “I like a woman who prefers to say who she is.”
Woman: “Who do you want me to be?”
Wahlberg: “I want a menu; I go to a restaurant.”
Woman: “Sometimes I need help getting out of character.”
Stranger sitting nearby: “She’d f*ck that elk [it’s a deer], if it had a d*ck and a dollar.”
Wahlberg punches him and says, “A real man earns a win on his own damn merits.”

This is not only vulgar but patently phony. No one talks this way. It is phony filmy patter.

At one point, Wahlberg is getting drunk in a bar. He falls into a conversation with a hippy looking guy—turns out he is Jesus. Wahlberg looks him up and down and says, “I’d f*ck you up if you weren’t f*cked up already.”

Jesus says, “Someone beat you to it.” Get it?

Jesus tells the Wahlberg character, “Life’s going to give you a gut full of reasons to be angry, kid. You only need one to be grateful.”

Wahlberg says, “That’s the most f*cked ratio since the number of marshmallows in Lucky Charms.”

It is at least remotely possible that such a retort could come from the real Stu Long, who had a college degree in English, but never from the Wahlberg character. It is just a cringy thing the writer/director thought sounded witty.

This part of the movie is full of such unlikely dialogue, things folks never say in real life.

The Wahlberg character gets a job working the meat counter at a grocery store so that he can meet people in the movie industry. A-huh. In comes a comely Carmen, the doe-eyed Mexican love interest.

Wahlberg shouts at her, “I got beef.”

She gives him a meaningful look and says, “I can see that.”

She is looking for fish.

He says, “You can find fish in a can, and you can let me take you to dinner.”

“How about I take you fishing, we compromise.”

She says, “Not much of a fisherman then, are you.”

Do real people have such corny, snappy dialogue?

The first half of the movie is full of such unlikely and even cringy dialogue.

And then there is the Catholic illiteracy. I will just mention a few.

When it comes time to get baptized, in Church, Wahlberg slowly pulls off his shirt. Yes, he pulls off his shirt, in Church…to get baptized. The camera pans lovingly over Wahlberg’s pumped-up frame, he leans down and gets baptized. Carmen is beaming. Have you ever seen anyone in a Catholic Church take off their shirt for baptism? Me neither. The writer/director, first timer Rosalind Ross, loves Wahlberg’s body. In not one but two scenes she lovingly shows him in his skivvies. Why? You figure it out.

In this movie f-bombs are relentless

And then the language.

These days, you get used to a few f-bombs in the movies. The children know not to use them. No one in our Catholic crowd uses them. It is a sorry state that you hear f-bombs everywhere, but everyone knows everyday usage is wrong. Still, you get used to a few of them in the movies. What you don’t get used to is so very many of them. In this movie f-bombs are relentless—from the Wahlberg character, from his mom, his dad, all the time. And not just f-bombs.

Consider the scene where the Wahlberg character is in the hospital and learns about the disease that will waste all his muscles and make him an invalid. The doctor tells him he will need help with everything. Wahlberg says, “You mean like taking a sh*t?” Then he tells the doctor to “take this sh*t out of my d*ck.” I had to watch this a few times to figure out he was talking about a catheter.

There is more. In the scene where he is talking to Jesus, Wahlberg says, “You want to have a big d*ck contest, bro?”

At one point, he must tell his mother that he has this disease. Foul-mouthed creature that she is, she says that he ought to ask God for a cure and “you can be his bitch.”

It was up to this point that I was railing against this movie to all who would listen. I had not yet finished it. After watching the rest of it, I became truly conflicted because the third and final act was quite good and quite moving.

Stu enters the seminary. He is a changed man and inspirational. His disease is wasting him. He walks with crutches. He can hardly feed himself. There is a scene where he and another seminarian, his nemesis, speak to inmates at a prison. Clearly, his nemesis cannot speak to these men. He loses them almost immediately. Stu pipes up. “You guys get one phone call a week. You can’t call your wife. She has another man. You can’t call your kids. They hate you. Only one you can call is God. He will never give up on you, and you should never give up on yourself.”

The problem is that Stu is crippled. Cripples can’t be priests. The seminary rector, played by uncredited British actor Malcolm McDowell, kicks him out. Stu enters a dark night of the soul. He comes to realize that his suffering is a gift from God. He comes to accept it. His father, played by Mel Gibson, becomes a changed man, too. He takes Stu back to Montana to care for him.

And then one day his father takes him to Church where he is surprised with ordination to the priesthood. His bishop has given in. Stu delivers a deeply moving sermon about his suffering, which brings his father to a 12-step program and to baptism. He even dances with his now reconciled wife.

Stu is assigned to the Big Sky Care Facility, an assisted living center. Outside the facility, the lines form down the block of people wanting to confess to him.

There is a lot of muck in this movie to get to this payoff. But there was a lot of muck Stu had to walk through on his way to the priesthood. This was the arc of his life, at least in the movie version. All the nastiness in the beginning makes sense given where he ends up: a holy priest changing lives. I hated this movie until the end when it kind of made sense.

This article originally appeared in Crisis. Reprinted with permission.