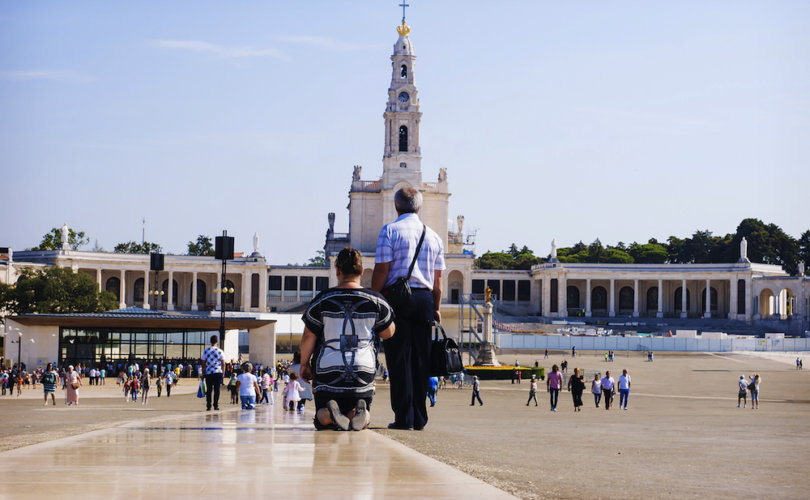 May 3, 2017 (LifeSiteNews) — On May 13, 1917, the Mother of Jesus began appearing to three shepherd children in Portugal with an urgent message that the human family was in mortal spiritual and physical danger. Her message was so urgent that the apparitions featured the most spectacular miracle since the resurrection of Jesus.

Mary pleaded with her children to repent, to pray the rosary daily and make acts of reparation as a means to achieve personal holiness, but also as a way to reduce the power of the forces of evil that were gathering in Europe and Russia.

This was a time when the seeds of the pernicious ideologies of Nazism and atheistic communism were being planted and would begin to bear their noxious fruit. Each of these movements would seduce and form their adherents with twisted and diabolical philosophies that threatened the eternal life of their souls, brought massive death and destruction, and in time threatened the world with nuclear annihilation.

The Blessed Mother at Fatima came to also warn her children that these movements would create a fertile soil for Satan to launch a massive attack on Christianity, the Jewish people, and the unborn child.

As we shall see, they all share a connection.

“Russia will spread her errors throughout the world, causing wars and persecutions of the Church. The good will be martyred, the Holy Father will have much to suffer, various nations will be annihilated.”

The Bolsheviks violently seized power in Russia in November 1917.  The Communists launched a massive attack upon the Body of Christ by persecution of the Church and attempts to destroy Christianity in Russia, Eastern Europe and later China. This is the first in a series of vicious attacks by Satan directed at the vehicles of God’s saving action in the world.

Keep in mind that when Mary refers to the “errors of Russia,” she is also speaking of the relationship between the reaction to the spread of communism, and the rise of the Nazi Party in Germany.

Hitler shrewdly manipulated the concern among German business and religious leaders as well as the common people at the rise of the communist party in the Soviet Union. Nazi propaganda hammered the message that the Jews, aligned with the Communists, betrayed the German nation in World War I and remained a mortal threat – a disease that must be extracted from the body of the German nation.

While initially exploiting the trappings of Christianity, the Nazis soon revealed that at the heart of their ideology was not only a hatred of Judaism, but also Christianity and Jesus Christ. The Nazi agenda was to neutralize, and in time destroy the power of the Church.

There are sociological and historical explanations for the rise of anti-Semitism in Europe, and in particular Nazi Germany in the early 20th century. Yet there were also diabolical forces feeding this rage that led to the horrific persecution and genocide of the Jewish people.

Salvation history reveals that the Jewish nation was formed to be a people set apart and consecrated in a special way to the one true God. It is from this type of womb of the Jewish nation that the chosen people would bring forth in time, Mary of Nazareth.

Mary, by virtue of her Immaculate Conception, offered the consecrated tabernacle of her womb and gave birth to Jesus, Son of David, and Son of the Living God.

Satan has a virulent and vicious hatred of the Jewish people.

The Jewish people were the vehicle through which God would break the power of Satan over mankind.  The ascent of the humble Jewish Virgin Mary to her vocation and mission opened the door to the victory of her Son Jesus at Calvary and the empty tomb.  This victory will be consummated at the end of time when the power of Satan and his demonic cohorts are forever crushed and bound for all eternity.

While “his time is short,” Satan still retains the power to deceive and corrupt mankind.

But Satan had an even greater vision for a plan to attack God and the human family that would transcend politics and national boundaries. He would use the intellectual and moral corruption of that historical period to spawn an even greater diabolical work that continues to unfold in our time.

Satan directs his rage and hatred toward another vehicle of God’s salvation for humanity in the incarnation of the Christ; the womb of women, the unborn child, and the family.

Geoffrey Strickland, J.D., J.C.L., who serves as the Rome office director for Priests for Life, shares about the roots of abortion in the former Soviet Union:

“ … history attests to the fact that Russia spread her errors throughout the world not only through the well-documented political ideologies and military atrocities attributed to it, but also through the single greatest error of our time: abortion.

Russia was the first country to legalize abortion up to birth without restriction and also developed and promulgated technology to this end. Russia and areas formerly controlled by Russia have the highest abortion rate in the world.  Further, those countries sharing in the political and ideological legacy of Russia at that time such as China, Cuba and others continue to carry on this violent imperative.

The errors of Russia would later spread to the United States with the legalization of abortion in 1973.

Thus “various nations” – the innumerable children of every race, creed and culture — have indeed been “annihilated” through the fundamental error of abortion and the faulty logic behind it, namely that a human child is not a human being.”

Over 1 billion unborn girls and boys have been aborted around the world in the last 100 years.

We failed to listen to our Mother Mary in 1917 as the forces of darkness gained power in Europe, Russia, and around the world.

Let’s hope and pray as we commemorate the 100th anniversary of the first Fatima apparition that our nation continues to work to reduce and end legal abortion, and bring the reconciliation and healing of Christ and His Church to all who have participated in the death of unborn children.