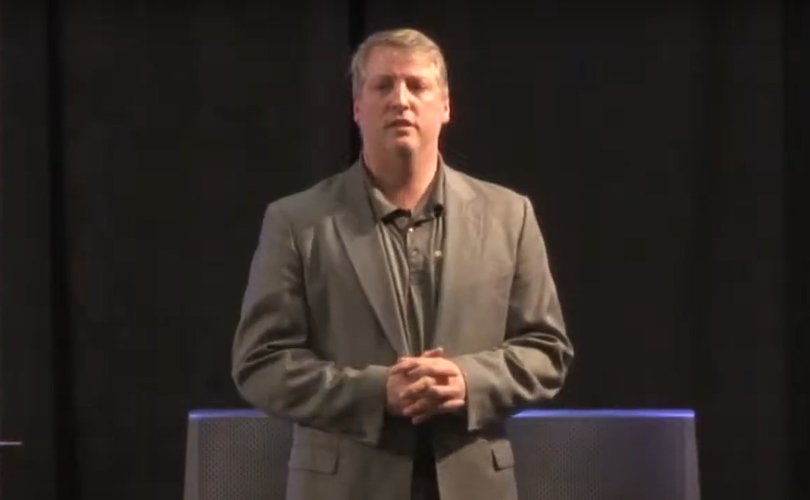 (LifeSiteNews) — Last Friday morning began in a routine manner for the Houck family of rural Pennsylvania. Mark woke up his wife Ryan-Marie just before 7 a.m. and went down to the kitchen to put a quiche in the oven, as his wife went to take a quick shower.

“We had a co-op today,” Ryan-Marie, a mother of seven young children, told LifeSiteNews around mid-day. “We’re a homeschool family, so we were going to the Shrine of Our Lady of Czestochowa [in Doylestown] today for co-op classes [with other homeschool families]. My husband teaches there. He teaches a boys virtue class,” she explained.

Yet at 7:05 a.m., their morning was forcefully disrupted when a mini-army of between 25 and 30 FBI agents, in around 15 vehicles, rapidly descended upon the Houck family residence, swarming their yard with rifles in firing position as some of the agents began violently pounding upon the front door, demanding it be opened or they would bust it down.

— Article continues below Petition —
Stand with Mark Houck, a pro-life Catholic dad of 7 raided by Joe Biden's FBI
Show Petition Text
8132 have signed the petition.
Let's get to 9000!
Thank you for signing this petition!
Add your signature:
Show Petition Text

Though Mark attempted to calm the agents due to the presence of his children, they continued yelling and when he opened the door, the agents “had big, huge rifles pointed at Mark and pointed at me and kind of pointing them throughout the house,” Ryan-Marie explained.

“The kids were all just screaming. It was all just very scary and traumatic,” she said.

So went the harrowing experience of the arrest of 48-year-old Mark Houck. And for what crime? Bomb threats? A serial murder spree? Not so much.

Rather, Mark, a pro-life sidewalk counselor, stepped in front of an abortion center “escort” who was targeting his 12-year-old son with vile, insulting language and invading his space. Then when the man leaned forward, Mark pushed the aggressor to the ground. After the case was thrown out by a Philadelphia district court, Mark received a target letter informing him that U.S. Attorney General Merrick Garland’s Department of Justice was opening a federal investigation into the charges.

The Houcks immediately informed the federal district attorney in Philadelphia that they were aware of the action and would be willing to come in at any point in time. The next communication they received from the feds, however, was with the Friday morning raid at 7:05 a.m.

In a Monday interview on the John-Henry Westen Show, Houck family spokesman Brian Middleton observed that it is fair to “infer motivation when you see [such an] action.” And since “there is no logical, rational reason, no good reason for this kind of excessive use of force,” this indicates that “there must be ulterior motives” that remain unstated.

“The reality is that we’ve reached a point in our time where we have to stop pretending that we don’t know what it is that we [do] know. The unthinkable has arrived at our doorsteps and we better begin to [recognize] the unthinkable,” he said.

What then might that unthinkable reality be that ought to be identified and brought to light?

Excessive force in law enforcement is a crime, and a violent crime. Noticing the list of victims of these violent crimes, we see hundreds of January 6 Trump supporters, pro-life activists, and medical freedom advocates, all mostly comprised of conservative Christians.

As has been obvious to anyone with eyes to see, including Florida Governor Ron DeSantis, Sen. Josh Hawley (R–MO),  Rep. Ronny Jackson (R–TX), and many more, these SWAT-type raids are clearly politically motivated, especially given their contrast to astronomically more serious leftist crimes that go unaddressed.

There is a widely used term for the utilization “of violence or the threat of violence, especially against civilians, in the pursuit of political goals.” That term is “terrorism.”

And we also have a word for individuals and organizations that utilize terrorism as an intentional method in pursuit of their political ends. They are called “terrorists.”

We can thus conclude that despite the veneer of impeccable auspices, the FBI may be the best funded and equipped terrorist organization in the world. And while these deep state terrorist activities under Merrick Garland’s DOJ have taken such aggression against the American people to a whole new level, they have been developing in the background for quite some time.

FBI’s history as a ‘Terrorism Factory’

As early as 2012, Rolling Stone Magazine reported on how, in response to 9/11, the FBI adopted new counter-terrorism tactics which equated to many incidences of entrapment. In these scenarios, FBI operatives would set-up violent terrorist plots, even pressuring and tutoring vulnerable individuals, and then swoop in as the heroes to stop it, providing the agency with favorable publicity in its fight against “Islamic terror.”

In addition, there is a book titled “The Terror Factory,” wherein the author investigated every terror prosecution from 2001 to 2013 and discovered that at least 50 of the defendants faced conviction due to criminal activity FBI operatives both encouraged and enabled. (More here.)

In at least one 2015 terrorist attack in Garland, Texas, which Tucker Carlson covered, an FBI agent helped facilitate a shooting spree which was fortunately thwarted by local police before the gunmen could harm any innocent people.

More recently, supposed “terrorists” were acquitted by a jury in a widely publicized “plot” to kidnap hard-left Democrat Michigan Gov. Gretchen Whitmer in 2020 when it emerged that the FBI helped facilitate this charade, likely for Deep State propaganda purposes.

And finally, we have the case of what perhaps may be the largest entrapment operation in the history of the terrorist FBI, and that is the orchestration of the January 6, 2021, disturbance at the U.S. Capitol, a story Revolver News broke in the summer of 2021 which was also amplified by Carlson. In summary, the Fox News host affirmed that “FBI operatives were organizing the attack on the Capitol on January 6, according to government documents.”

With the arrival of the Biden regime in January 2021, Carlson observed the FBI “has changed its focus. It’s no longer going after Islamic extremism. It’s now going after Joe Biden’s political opponents.”

Pope John Paul II: ‘Have the courage to look the truth in the eye and to call things by their proper name’

In his landmark encyclical Evangelium Vitae, John Paul II offers an admonition which we may want to well consider: “we need now more than ever to have the courage to look the truth in the eye and to call things by their proper name, without yielding to convenient compromises or to the temptation of self-deception.”

With a little simple reasoning, and the courage to recognize “the unthinkable,” it becomes quite clear that the American people – who are heirs to the “land of the free and the home of the brave” – are being assailed by what can justly be referred to as a terrorist deep state regime, fully emboldened and supported by the Biden administration and the industrial media complex.

And as we all approach the November 8 elections, a majority of the American people seem to have at least some understanding of this as well.

An August Rasmussen poll reveals that these overreaches by the terrorist Biden regime don’t seem to be doing the Democrats any favors, should they actually be seeking to be duly elected back into power.

Probably a good time to retweet this one … before we get raided … https://t.co/c4s5nwucis