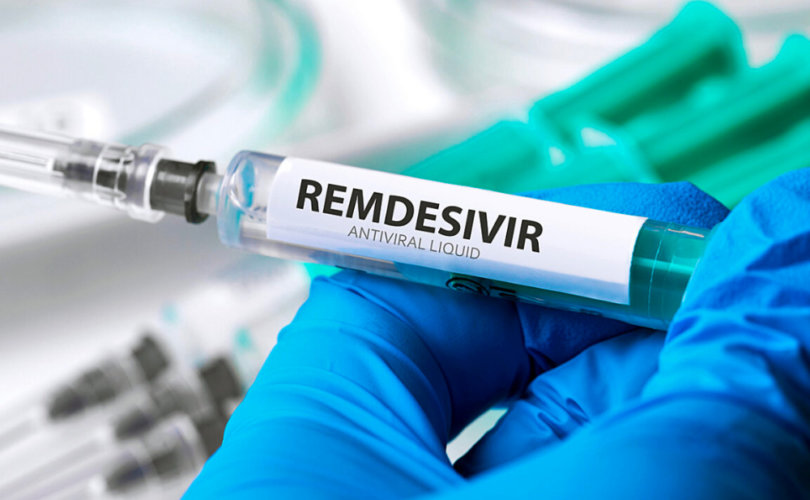 (Children’s Health Defense) – The U.S. Food and Drug Administration (FDA) on April 25 approved the use of the antiviral therapy, remdesivir, to treat COVID-19 in infants four weeks and older.

Dr. Patrizia Cavazzoni, director of the FDA’s Center for Drug Evaluation and Research, said in a press release:

“As COVID-19 can cause severe illness in children, some of whom do not currently have a vaccination option, there continues to be a need for safe and effective COVID-19 treatment options for this population.

Today’s approval of the first COVID-19 therapeutic for this population demonstrates the agency’s commitment to that need.”

According to the press release, the FDA’s decision to approve the therapy, marketed under the name Veklury, is supported by a clinical study conducted on infants 4 weeks and older weighing a minimum of 6.6 pounds.

The study is underway and will not be completed until February 2023. There are no published results.

However, Gilead Sciences, maker of remdesivir and sponsor of the study, provided the following details in a company press release:

Nevertheless, Gilead Science assured that “no new safety signals were apparent for patients treated with Veklury.”

The study was of single-arm, open-label design.

A single-arm study has no control group, making it impossible to compare its effectiveness against standard of care.

Open-label means participants and investigators were aware they were receiving the drug, making it impossible to separate placebo from drug effect.

Studies show little or no benefit

Beyond the absence of any publicly available data on the efficacy and safety of this drug in humans of this age, available studies on older subjects indicate remdesivir offers no more than a meager benefit to those who survive its use.

In fact, this is why the World Health Organization (WHO) in November 2020 recommended against the use of remdesivir to treat COVID-19. The WHO only recently (April 22, 2022) updated its recommendation to support the drug’s use in patients who are at high risk for hospitalization.

Nevertheless, the FDA explains its long-standing support of remdesivir use in adults here, citing six studies that had the greatest impact on the agency’s position.

Here is a summary of the findings of each study from the FDA’s webpage:

As demonstrated, the first five studies used to justify the FDA’s approval of remdesivir showed little, if any, benefit to hospitalized patients with moderate or severe disease.

This is in contrast to the sufficiently proven benefit of off-label use of the previously licensed medications hydroxychloroquine and ivermectin.

Only the PINETREE study investigated the benefit of remdesivir for outpatient use. In that study, the drug provided a substantial benefit in preventing hospitalization when given in three separate doses over three days.

However, only eight individuals under the age of 18 were enrolled in the study, and none were younger than 12.

The primary endpoint, a composite of COVID-19-related hospitalization or death from any cause, did not occur in the under-18 group.

In other words, the study — funded by Gilead Sciences — showed the drug offered no benefit in this cohort.

Nevertheless, in reporting on the FDA’s approval of remdesivir for infants and young children, CNN found someone to support the FDA’s decision.

“The FDA’s approval of remdesivir for young children is ‘great,’ said Dr. Daniel Griffin, an instructor in clinical medicine and associate research scientist in the Department of Biochemistry and Molecular Biophysics at Columbia University.”

Safety ‘not established’ in pediatric patients

Not only is there scant evidence that remdesivir is an effective treatment for COVID-19, the drug’s safety is debatable.

With regard to its use in infants, even the FDA must acknowledge nobody knows how safe it is.

After all, the manufacturer’s label states:

“The safety and effectiveness of VEKLURY (remdesivir) have not been established in pediatric patients younger than 12 years of age or weighing less than 40 kg.”

With regard to pharmacokinetics (where the drug distributes in the body) the label states:

“The pharmacokinetics of VEKLURY in pediatric patients have not been evaluated.”

An indictment of the drug regulatory process

Let’s reflect on what the director of the FDA’s Center for Drug Evaluation and Research said regarding the approval of remdesivir for treating COVID-19 in infants 4 weeks and older:

“As COVID-19 can cause severe illness in children, some of whom do not currently have a vaccination option, there continues to be a need for safe and effective COVID-19 treatment options for this population. Today’s approval of the first COVID-19 therapeutic for this population demonstrates the agency’s commitment to that need.”

Safety and efficacy apparently can be conveniently established by fiat, not evidence.

In the end, the FDA’s approval of remdesivir is not an assurance of the drug’s safety and efficacy but an indication the agency is no longer interested in protecting the public from potentially harmful and ineffective therapies — or, in other words, in doing its job.

There will undoubtedly be doctors like Griffin who welcome this approval.

However, I don’t believe every pediatrician will accept the FDA’s guidance so readily.

It’s not easy to place an intravenous line to administer remdesivir in the tiny vein of an irritable baby coming from home with a positive rapid test. And then do it again the next day. And the day after that.

At some point, clinicians’ sensibilities will be challenged enough to compel them to actually examine how the FDA arrived at its conclusions.

Guidelines are meaningless if doctors choose not to abide by them.