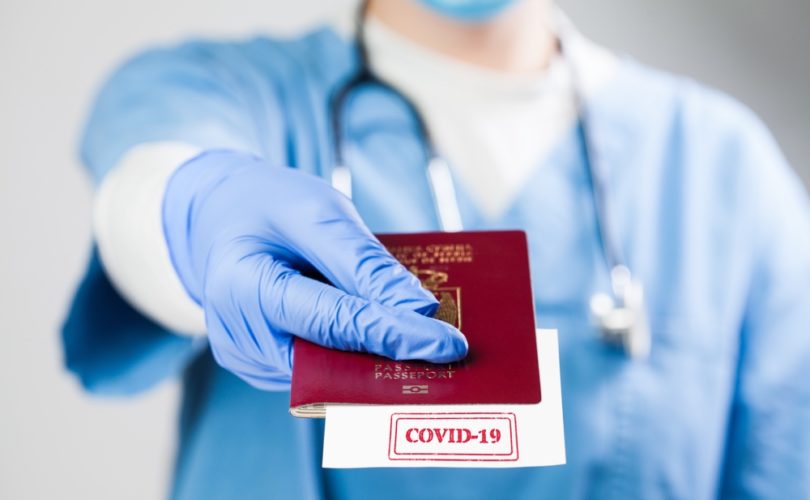 April 13, 2021 (American Thinker) – The Biden administration — arguably the most extremist executive regime in terms of its threat to civil liberties in recent history — is currently engaged in a coordinated effort to develop and introduce “vaccine passports” to the American public:

[The Biden administration is] currently working with a range of companies on the standards, including non-profits and tech companies[.] … Multiple government agencies are engaged in conversations and planning, coordinated by the White House, as this kind of system will play a role in multiple aspects of life.

Specifically, the federal Department of Health and Human Services has been at the helm of the coordination of the “vaccine passport” program:

The administration's initiative has been driven largely by arms of the U.S. Department of Health and Human Services, including an office devoted to health information technology, said five officials who spoke to the Post on the condition of anonymity.

Suffice it to say, the federal bureaucracy has been less than forthcoming regarding its role in the creation of vaccine passports.  In late 2020 and early 2021, when the concept of looming vaccine passports first began to enter the public consciousness, insiders in the Trump administration assured the public that the U.S. government would not be involved in their creation:

The United States will not participate [in the coordinated global effort to create vaccine passports], in part because the White House does not want to work with the WHO, which President Trump has criticized over what he characterized as its “China-centric” response to the pandemic.

This means one of three things: a) the federal government officials who spoke to the media were lying or ignorant to the true nature of federal involvement in the creation of vaccine passports, b) the policy orientation changed from administration to administration, or c) opportunistic government bureaucracies sensed the benefits of these types of documents for social control and changed course.

Regardless, in no way does involvement in the creation of “vaccine passports” fall within the purview of the United States government.  This is uncharted territory from a civil liberties perspective.  Accordingly, constraint on the government's ability to install such regimes of surveillance is prudent.

The Fourth Amendment of the United States Constitution, the supreme law of the land and the font from which American protections against government overreach spring, clearly reads:

The right of the people to be secure in their persons, houses, papers, and effects, against unreasonable searches and seizures, shall not be violated, and no Warrants shall issue, but upon probable cause, supported by Oath or affirmation, and particularly describing the place to be searched, and the persons or things to be seized.

Let's clearly delineate between private companies — which, under the law, have the right to write their own (voluntary) rules regarding the behavior of their employees and customers — and the federal, state, or local government.

Vaccine passports, in the initial stages of their rollout, were cleverly pitched as requirements by private companies and, therefore, outside the purview of conventional civil liberties.  This concept of private business rights is accepted by a wide portion of Americans.  In fact, it is in the best traditions of American society and economy.

Unfortunately, the growing evidence now suggests that that pitch was dishonest or, at best, misleading — a way to legitimize government efforts to foist vaccine passports on the public under the auspices of private business mandates.

For a possible glimpse of the future of government surveillance if we do not correct course, we look to Israel, the European Union, and other Western government around the world:

The European Commission will present a proposal in March on creating an EU-wide digital vaccination passport, an issue that has divided member states, Commission chief Ursula von der Leyen said on Monday.

In addition to being privacy violations in and of themselves, vaccine passports are also goldmines for hacks by nefarious actors, state and non-state alike.  The Israeli “green pass” model, for example — already in effect for the Israeli population and directed by the Israeli government — is ripe for abuse of privacy, according to the I.T. experts who have studied it:

The green pass is also a potential privacy nightmare[.] … [T]he pass reveals information that those checking credentials don't need to know, such as the date a user recovered from covid or got a vaccine.

The extent to which personal data mined from these vaccine passports can be used for nefarious purposes is, at this early stage of rollout, speculative fiction: the sky is the limit.

If the U.S. government mandates proof of vaccination to access government services as the Israeli government and other regimes around the world have already done or proposed to do, this new power is nearly certain to be abused.

The PATRIOT Act, the National Defense Authorization Act (NDAA), and other post-9/11 surveillance regimes advanced by the national security state — already burdensome and arguably unconstitutional themselves — have been wildly abused beyond even their original Orwellian scope.

Supposing civil liberties proponents were to concede the urgent need and constitutionality of vaccine passports — a huge leap indeed and a potentially fatal mistake for the American way of life — the federal government simply cannot be trusted to adhere to the rules and laws surrounding these “passports” as written.

A very similar, even parallel, dynamic of problem-reaction-solution can be seen in the immediate aftermath of 9/11, a national tragedy that was immediately seized upon by the national security apparatus to justify widespread new powers for itself.  The new surveillance capabilities granted via the post-9/11 acts listed above were immediately abused at scale.

Questioned under oath before Congress, one of the highest authorities in the land, James Clapper, former director of national intelligence, offered blatantly false (and perjurious) testimony during the Obama administration:

Clapper appeared before the Senate to discuss surveillance programs in the midst of a controversy over warrantless surveillance of the American public.  He was asked directly, “Does the NSA collect any type of data at all on millions, or hundreds of millions of Americans?”  There was no ambiguity or confusion and Clapper responded, “No, sir. … Not wittingly.” That was a lie and Clapper knew it when he said it.

The takeaway from Clapper's unprosecuted perjury is that, far from an anomaly here or there, the government abuses each new power it is granted as a matter of routine —  knowingly and at the highest levels.

We must say no to placing new vaccine passport powers into the hands of dishonest D.C. bureaucracies and agencies.  Our already crumbled civil liberties, those that we have left, depend on it.