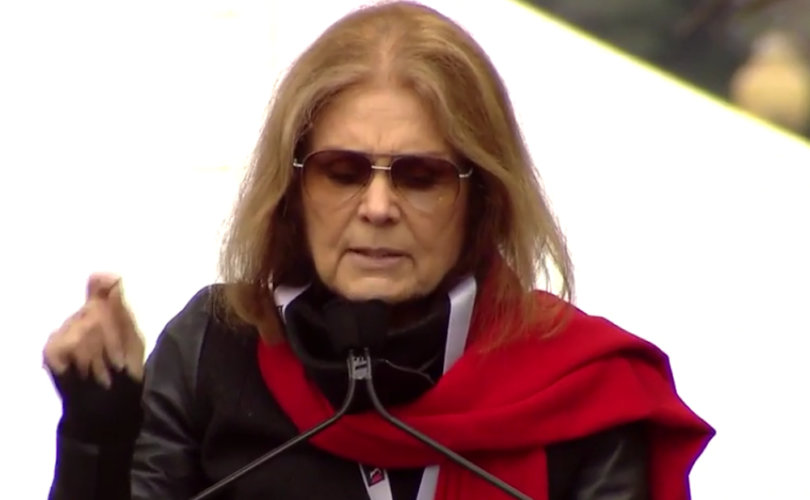 “What causes climate deprivation is population,” she said, echoing the current liberal spin.

She then tied her pet issue, unrestricted government-funded abortion and its global coercion, with the standard “Florida-is-sinking-into-the-ocean” fearmongering:

“If we had not been systematically forcing women to have children they don’t want or can’t care for over the 500 years of patriarchy, we wouldn’t have the climate problems that we have. That’s the fundamental cause of climate change,” she said.

Steinem, who popularized the “I got an abortion” t-shirt, then said that the world’s main salvation from polar ice-cap melt is more abortions.

“The human load on this earth is the biggest cause of global warming, and that is because of forcing women to have children they would not on their own choose to have,” she said.

The Daily Caller noted the irony in climate change activists like Steinem, who want to save the planet for future generations…by aborting the future generation: “We have to kill the children, or else we won’t have any sort of planet to leave to the… children. Wait.”

Refinery29 did not challenge the logic of Steinem’s claims that “climate deprivation” threatens the world, that its cause is “population,” that there are too many children in the world, that women historically have been “systematically forced” to bear children they don’t want, that patriarchy is 500 years old, or that universal abortion-on-demand would eliminate climate change.

Steinem made the same batty assertions last year as the keynote speaker at a Planned Parenthood fundraiser. “Forced childbirth is the single biggest cause of global warming,” she said.

Not surprisingly, she also blames the Pope and “patriarchal religions” for “the earth’s temperature…ticking upwards.”

“We should have this massive education campaign pointing out that the Pope and all of the other patriarchal religions that dictate to women in this way, accusing them of global warming,” Steinem said.  “Does (the Pope) know he’s causing it?”

The 83-year-old former Playboy bunny, whose mother went partially insane before she was born, doesn’t have any children of her own. She waited until she was in her sixties before marrying.  (Her husband died just three years after they were married.)

Steinem characterizes her own abortion at age 22 as “positive” and guilt-free, even though “I used to sit and try and figure out how old the child would be.”