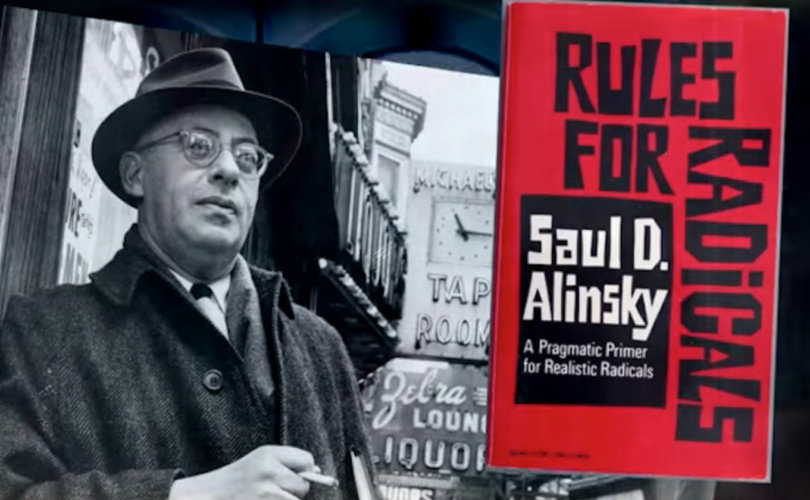 September 26, 2017 (AmericanThinker) – Saul Alinsky’s Rules for Radicals is considered the bible for the left, the Democrat Party playbook. Hillary Clinton wrote her college thesis on Alinsky’s book. Barack Obama is a disciple of this guide for community organizing. The reality is that the “Rules” are applicable to any political cause or movement, not just one on the left side of the political spectrum.

I kept hearing about this book and decided to read it for myself. Wearing a tin foil hat with a clove of garlic around my neck, I ventured to the dark side and opened the book. I found Alinsky’s philosophy and rules quite interesting. I also drew parallels to what is happening now, decades after the book was written. But not in an expected way.

Democrats are adept at using Alinsky’s rules to further their agenda. Many conservatives bemoan the fact that Republicans are unaware of these tactics or are unwilling to use them. Much like a baseball team not knowing they can bunt or run double plays and then wondering why the other team uses these tactics and wins games.

The rules can easily be used by the right too. In Alinsky’s own words, “In this book we are concerned with how to create mass organizations to seize power and give it to the people.” Who else in the GOP might say similar words? Paul Ryan? Mitch McConnell? Mitt Romney? Jeb Bush? None of the above. Only Donald Trump.

Who talks about returning power to the people, rather than maintaining power in the establishment? Or Congress? Or with the deep state? Remember what Trump said during his inaugural address, “We are transferring power from Washington, D.C. and giving it back to you, the people.” Out of the Alinsky playbook.

President Trump is perhaps an unknowing Saul Alinsky disciple, following many of the “rules for radicals” when he campaigned for and won the presidency. One of few Republicans to use these rules to their advantage. Typically, Republicans act dumbfounded when these rules are used against them. Think John McCain and Mitt Romney. Or any of the many unsuccessful Republican primary candidates defeated by candidate Trump.

What tactics has Trump co-opted? “The job of the organizer is to maneuver and bait the establishment so that it will publicly attack him as a dangerous enemy.” Through his public comments and tweets, is there any doubt that the entire establishment view Trump as “a dangerous enemy”? Watch the news. Or the Emmy Awards. Or any of the many late night “comedy” shows. Read National Review or the Weekly Standard. Listen to Congressional #NeverTrumpers. Trump baits establishment, getting them in a lather over every tweet, typically looking foolish in their outrage. A few weeks ago, it was Melania’s high heels en route to hurricane-ravaged Houston. This week it’s Trump’s long-overdue straight talk to thugs and dictators at the United Nations.

Then there is ridicule, another Alinsky tactic. “Ridicule is man's most potent weapon. It is almost impossible to counteract ridicule. Also, it infuriates the opposition, which then reacts to your advantage.” Trump began this during the primaries. Little Marco. Low-energy Jeb. Lyin’ Ted. Then during the presidential campaign, Crooked Hillary.

All designed to unnerve his political opponents, to his advantage. It hasn’t stopped now that he is President. Cryin’ Chuck Schumer. And the latest nickname for the North Korean dictator, Rocket Man, and even, Little Rocket Man. A funny yet accurate description of the madman lobbing missiles across the Pacific. As the Elton John song describes, “I'm a rocket man. Rocket man burning out his fuse up here alone.” If Trump’s executive order works, Rocket Man will indeed be alone.

Another Alinsky rule is, “A good tactic is one your people enjoy.” Most Trump supporters love his tweets and nicknames. We cheer when he calls CNN’s Jim Acosta “Fake News”. We laugh when Trump retweets a GIF of him hitting a golf ball into Hillary Clinton’s back, while CNN huffs and puffs with indignation.

Finally, there is President Trump the other day at the UN, at an august gathering of the General Assembly, calling another world leader “Rocket Man,” disrupting the stuffy, pointy-headed decorum of the UN. But something his people enjoy immensely. Especially when his political opponents soil their pants over such an “unpresidential” remark.

Other Alinsky tactics Trump has utilized, “Keep the pressure on, with different tactics and actions, and utilize all events of the period for your purpose.” Or, “Pick the target, freeze it, personalize it, and polarize it.” Just ask his political opponents.

I doubt Trump has read Rules for Radicals. Instead as a graduate of the New York City school of hard knocks, he instinctively knows how to organize and win. What a refreshing change to see a Republican co-opting and using these community organizing rules so successfully against the left and the deep state establishment.

Brian C. Joondeph, MD, MPS, is a Denver based physician and writer.

Catholic bishops helped to fund Alinsky training for Barack Obama, according to documents