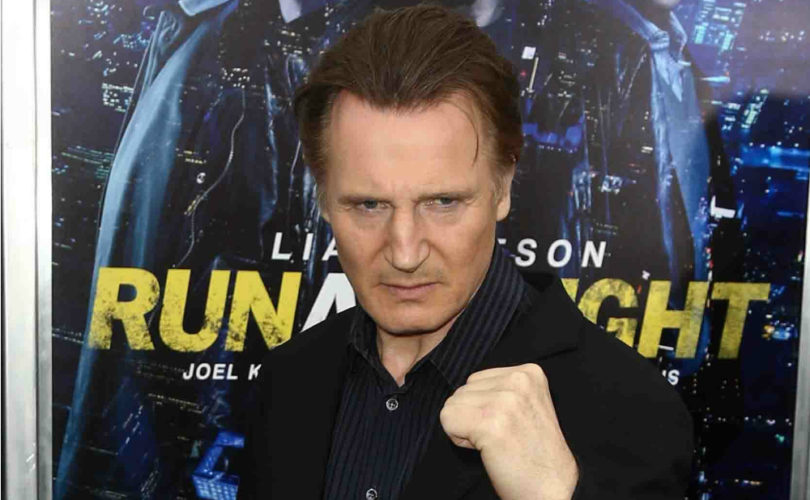 DUBLIN, October 22, 2015 (LifeSiteNews) — Irish-born film star Liam Neeson has narrated a pro-abortion video for Amnesty International that claims the Catholic Church is the sinister force behind Ireland’s eighth constitutional amendment, which protects the unborn child from abortion. Ireland's pro-life law “blindly brings suffering and even death to the women whose lives it touches,” Neeson says in the ad.

The absurdly depicts the 1980s, when the pro-life amendment was added, as the Dark Ages.

Sign a petition to boycott Liam Neeson over his shocking pro-abortion ad!

Neeson, born and raised Catholic in Northern Ireland, is the star of “Schindler’s List” and the “Taken” series of thrillers. Recent reports hint he is himself taken with Islam, a religion that does not prohibit abortion.

“And it’s foreign interference,” she added, noting that Neeson recorded the video, called “Chains,” in London, where Amnesty International is headquartered; what is more, she adds, its funds come from American billionaire George Soros (more than $800,000) and Chuck Feeney, another American billionaire.

“They have way more money than we do to spend,” said Nic Mha Thua. Since 2010 Soros has also given $10 million a year to Human Rights Watch, another group that has targeted the Irish constitution`s pro-life Eighth Amendment. “The repeal campaign started with that money,” she said.

The Eighth Amendment was passed in 1983, putting it squarely in the Dark Ages, according to Neeson’s script. Though the video never names the Catholic Church, it spends its entire 96-second course panning through a ruined church and cemetery, stopping to focus on mist-shrouded, ruined pews, a fallen tombstone and an ancient stone cross over there, under a sunless sky.

As these grey images of decay and corruption play across the screen, comes Neeson`s familiar, cultured voice-over:  “A ghost haunts Ireland, a cruel ghost of the last century still bound to the land.” “A spirit that lives in a constitution written for a different time we’d hoped we’d left behind.”

While some of the script suggests the ghost is the Eighth Amendment itself (“this is a ghost of ink and paper”), it also says, “It is feared by politicians,” bringing us back to the baneful hand of the Catholic Church. Neeson concludes, “Ireland doesn’t have to be chained to its past. It’s time to lay this ghost to rest. Repeal the Eighth.”

Then text appears claiming abortion is illegal in Ireland even in cases where the woman’s health is at risk, or of incest and rape. This is so misleading, says Ide Nic Mha Thua, it is tantamount to lying. The Life Institute carries a detailed rebuttal, for example, on its website to the doubly false claim that abortions are required to save women’s lives while the Irish constitution prevents doctors from saving the life of the mother.

The law, says the Life Institute, permits, indeed it requires, “any treatment needed to save a pregnant woman’s life  – including premature delivery of the baby if required. Even though the baby may not survive, every reasonable attempt to save the baby’s life would be part of the medical intervention. These medical treatments are NOT abortions [and] abortion campaigners are being both dishonest and insensitive to mothers to pretend otherwise.”

Adds HLI’s Boquet: “Shame on Amnesty International. Ireland has for some time had among the lowest maternal mortality rates in the world, in large part because most of the hospitals are run by or were started by the Catholic Church. It has strong restrictions on abortion even as it has given the best maternal care in the world. How dishonest of Amnesty International to ignore these facts to blame the Church that gave birth to Irish culture and the hospitals that earned their reputation for excellence in maternal care.”

But Amnesty International and Human Rights Watch (since it got on Soros’s payroll) have been leading their efforts with the notion that Ireland’s abortion ban risks women’s lives, followed by the spectre of women forced to bear the progeny conceived in rape or incest, which in reality is the source of under one percent of aborted unborn children.

The well-heeled foreign organizations have commissioned many polls indicating majority support for repeal, always couched in terms of rape, incest, life-threatening pregnancies or unborn babies with equally rare “fatal foetal abnormalities.”  Comments Nic Mha Thua: “When you ask the question the right way, you get the answer you want.”

Unfortunately, Ireland’s pro-life movement lacks the funding to commission its own polls. The Life Institute has launched a frugal but effective grassroots campaign based on one-to-one encounters, said Nic Mha Thua. “And we’re using the social media more.”

Repealing the Eighth Amendment would require a referendum so the pro-abortion efforts have focused on getting the ruling Fine Gael government to stage one. The next national election must be held by early 2016 and the opposition has expressed its support for a referendum, while the government has not ruled a referendum out, and some cabinet ministers have expressed outright support.

The news media are supportive too. They made much of the 2012 death of Savita Halapppanavar, caused by an infection during pregnancy. The media called for repeal when her husband claimed she was denied the abortion that would have saved her life. In fact, if medical staff had caught the infection her life would have been saved.

Again, last year, the media seized on the complaint of a young immigrant who came pregnant into Ireland and then demanded an abortion which medical staff rightly refused her because her life was not at risk.

But Neeson, Soros, Amnesty International et al prefer to exploit a fantasy image of a hidebound, fearful medical profession hunching over their hapless patients with rusty equipment, while black cassocked priests watch over their shoulders, thumbscrews poised. This is called “framing” the story.

For its “openly anti-Catholic position [and] its deliberate obfuscation of the facts,”  insists HLI’s Boquet, Amnesty International “must apologize to the many Catholic medical professionals in Ireland who have saved millions of Irish mothers and babies with their excellent care.”

Ireland rules out referendum on abortion, but puts gay ‘marriage’ on the ballot