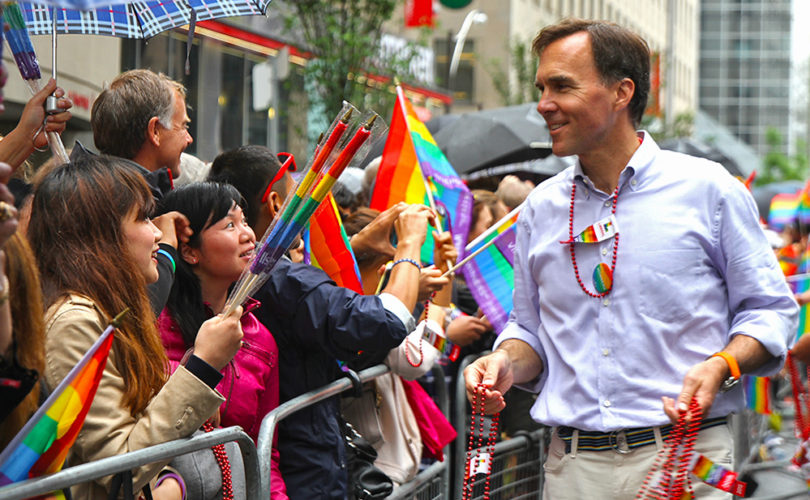 May 17, 2016 (LifeSiteNews) – Manners protect morals, somebody once said. Someone should slip this truism to Canada’s Finance Minister Bill Morneau, the married man who thought a good way to warm up the Montreal Board of Trade the other day was to reminisce about a past love affair and expose the intimate sexual standards of one member of his audience of prominents, former Quebec Finance Minister Monique Jerome-Forget.

Morneau dated Mme. Jerome-Forget’s daughter Elise back in the 1980s, and when the Toronto-raised university student visited Elise’s home in Quebec, the parents showed the couple not to separate rooms as poor Bill expected, but to a single room. Single room: single bed, get it?

“As a boy from Toronto, that wasn’t what parents said to you,” Morneau said. “They would send the boy that way and the girl that way, ” the Montreal Gazette reports.

It was, he told his audience, his introduction to Quebec. “‘I’ve loved Quebec ever since, as a result,’ he concluded to loud applause,” the Gazette records.

What does it say about wonderful Quebec? Gwen Landolt, that doughty defender of traditional Christian morality and vice president of Real Women Canada, thinks it’s pretty emblematic of a “society that’s falling apart. So many children are being born out of wedlock; the lowest marriage rate, the highest divorce rate, the highest suicide rate, these are a conflicted people.” She’s right about those social indicators, but so what, say my Quebec friends: “We have joie de vivre.” If you say so.

What does Morneau’s indiscretion say about the Liberal government, with its handsome Prime Minister Justin Trudeau and wife Sophie, the very model of conventional couplehood? Landolt doesn’t doubt the the Trudeaus’ sincerity but sees their domestic arrangements as something like a Potemkin family, hiding the increasingly anti-family values of the Liberal Party.

“Morneau reflects Liberal values,” Landolt told me, by his joking about things better left private at a very public gathering. But it’s no joke that the same party wants to make all washrooms and change rooms in schools opened up to sexually confused men and boys dressed as girls and women.

What Morneau jokes about in public at the level of manners, the Liberals undermine in private at the level of our intimate relations: the destruction of the family in the name of individual autonomy, self-expression, and, not to put too fine a face on it, unrestricted sexual pleasure.

One of the strongest defenders of good manners and conventional morals, if largely unlauded, is American filmmaker Whit Stillman. In his early film Metropolitan, a group of Manhattan upper class teenagers reassemble from their universities to frolic decorously and play Truth or Dare. But the film’s heroine Audrey, who is channelling Stillman, objects to the game’s premise that the players must expose their embarrassing secrets for the fun of all.

Argues Audrey: “There are good reasons people don’t go around telling people their most intimate thoughts. Games like this can be really dangerous.”

“I don’t see what’s ‘dangerous’ about it,” counters the hostess.

Rebuts Audrey: “You don’t have to. Other people have. That’s how it became a convention — people saw the harm excessive candor could do. That’s why there are conventions, so people don’t have to go around repeating the same mistakes over and over again.”

But, of course, we are repeating the same mistakes, starting with Quebec, but with the rest of the country following blindly, Ontario first. “They are just further along than the rest of Canada,” Landolt sighs. Still, I understand la Belle Province has the highest joie de vivre rate.