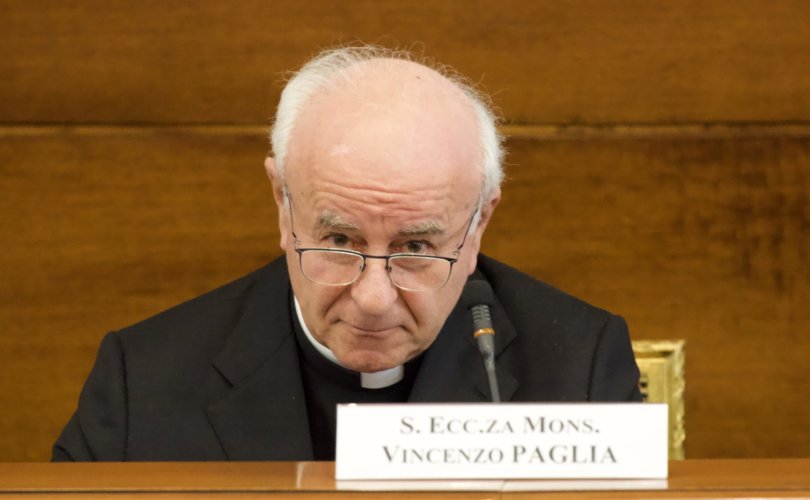 ROME, August 15, 2019 (LifeSiteNews) — The “firefighters for the new direction” being taken at the John Paul II Institute in Rome are “struggling” to put out a blaze of public scandal, as controversy sparked by a recent purge of professors threatens to reach the door of the Pope’s residence at Santa Marta.

In a new letter published by respected Italian journalist, Aldo Maria Valli, an informed source, speaking on condition of anonymity, said the “violent upheaval in the teaching staff” and “drastic change in the curriculum and orientation of academic research” has sent “shockwaves” through the Church, and generated a reaction that is “unprecedented in the pontificate of Pope Francis, both in intensity and in duration.”

The “firefighters for the new direction,” i.e. Institute Chancellor, Archbishop Vincenzo Paglia, and Institute President, Monsignor Pierangelo Sequeri, have “powerful means of mass media containment and threat deterrence at their fingertips,” he source said. He noted that several journalists were “forced to give up writing about the matter” after their editors received “pressing phone calls.”

Yet these “firefighters” are still “struggling to put out the fire,” as shock over recent events continues to echo through the Catholic world “thanks to several Italian and international newspapers and websites.”

Despite increasing pressure, those at the helm of the new JPII Institute — including Archbishop Paglia, Monsignor Sequeri and their “superiors in the Roman Curia” — have “not yet decided to back down,” the source said.

“True, loyal and courageous men with great minds moved by charity, justice and truth (to say nothing of love of Christ and his Church) would step back in praiseworthy humility, admit their own error and begin a dialogue with all the parties involved,” he observed.

“Instead,” he said, “at least for now, there is nothing of the kind,” adding that the “academic authorities seem to be preparing a text to respond to criticisms.”

Earlier this month, in fact, the personal secretary to Archbishop Paglia, Father Riccardo Mensuali, said for the time being they are not answering questions regarding recent changes to the JP II Institute.

Mensuali told the Catholic Herald that “the institute remains desirous of giving exhaustive responses but asks a few weeks’ time in the month of August in order to formulate adequate responses.”

Observers note that Archbishop Paglia could not have acted on his own in carrying out such sweeping changes.

In Sept. 2017, with the motu proprio Summa familiae, Pope Francis suppressed the original institute founded by John Paul II, replacing it with a new institute to carry forward the teaching contained in Amoris Laetitia. He has not yet commented on the matter.

I offer you an intervention that unfortunately cannot be signed but that, as you will understand by reading it, comes from a person well informed about the facts and history of the institution. It is an important contribution for framing the issue, grasping the depth of what’s at stake, and getting to know better some of the protagonists of the revolution underway.

Here below is an English translation of the letter, which first appeared in Italian on Duc in Altum.

The recent incredible event concerning the prestigious Pontifical John Paul II Institute for Studies on Marriage and the Family (which was suppressed by the motu proprio Summa familiae, issued by Pope Francis on September 8, 2017, and formally replaced by the same document with the “Pontifical John Paul II Theological Institute for the Sciences of Marriage and the Family”) has seen a violent upheaval in the teaching staff and a drastic change in the curriculum and orientation of academic research.

What has occurred in recent weeks is sending growing shockwaves through minds and hearts. It is generating a reaction in the people of God and among some of their pastors (those who are not concerned with pursuing an “ecclesiastical career” but with serving in love and self-denial the Church of Christ and the good of the faithful) that is unprecedented in the pontificate of Pope Francis, both in intensity and in duration.

A “mobilization of science and knowledge” about love, marriage, family and human life is growing day by day, and the “firemen for this new direction,” while having powerful means of mass media containment and threat deterrence at their fingertips (some journalists were forced to give up writing pieces on the matter by their directors after they received pressing phone calls …), are struggling to put out the fire.

Concerns (and, in many cases, even indignation) over the dismissal “without just cause” of several officials of the Congregation for the Doctrine of the Faith and the “departure before retirement” of the Prefect of the same Congregation, Cardinal Gerhard Ludwig Müller (on July 1, 2017); over the unjustified humiliation of the Prefect of the Congregation for Divine Worship and the Discipline of the Sacraments, Cardinal Robert Sarah (for an “excessively orthodox” interpretation of the motu proprio Magnum principium issued by the Guinean cardinal); or over the crack-down on several institutes of consecrated life that were “too faithful” to their original charism and rich in young vocations, have not generated such an intense and enduring public and private response inside and outside the Church. And its echo is still being heard thanks to several Italian and international newspapers and websites, including Duc in altum.

It would suffice to reconsider carefully what has been said in interviews or written directly by the protagonists (despite themselves) about this “purge” of professors and teachings — but above all of the Magisterium on the family and human life of St. John Paul II, who founded this ecclesial academic institution and whose name it bears — to ask how the Grand Chancellor, Archbishop Vincenzo Paglia, the president Monsignor Pierangelo Sequeri, and their superiors in the Roman Curia have not yet decided to back down. (The word “purge” also came out of the mouth of a former president of the Institute, Cardinal Angelo Scola, who is usually very prudent in his judgments regarding ecclesial disputes.)

True, loyal and courageous men with great minds moved by charity, justice and truth (to say nothing of love of Christ and his Church) would step back in praiseworthy humility, admit their own error and begin a dialogue with all the parties involved. These parties include the Dicastery for Laity, Family and Life, which is closely connected to the John Paul II Theological Institute; the professors of the institute; the students and diocesan bishops and superiors general from every part of the Church who sent these students to Rome not to enroll in courses at just any university where questions of love and sexuality, life and marriage are dealt with according to “secular” anthropology and ethics, albeit in dialogue with the “Catholic” morality, but so that they might learn and study in-depth the beauty and truth inherent in the corpus of the Roman Magisterium on these fundamental aspects of life for the believer, which found its summit in the teaching of St. John Paul II.

And instead (at least for now), nothing of the kind: the two academic authorities seem to be preparing a text to respond to criticisms that, instead of appreciating the truth and goodness present in such criticisms (apart from resentful tones and polemical aspects which are inevitable in those who are wounded in body and soul by unilateral and coercive measures), denigrates and disqualifies opposing critiques despite the evidence and reasonableness they exhibit and which is there for all to see. “Only a blind man would not be able to see it,” as Cardinal Carlo Caffarra said in other circumstances.

I would like to add just three further considerations, which are not unrelated to the arguments put forward thus far, but which I hope will help those in charge to rethink the John Paul II Institute. (At least this: if not reach a new decision, which would be the right and proper thing to do).

And I will stop at justice: if we were to consider mercy, I wouldn’t know what to write.

Thank you for your attention.