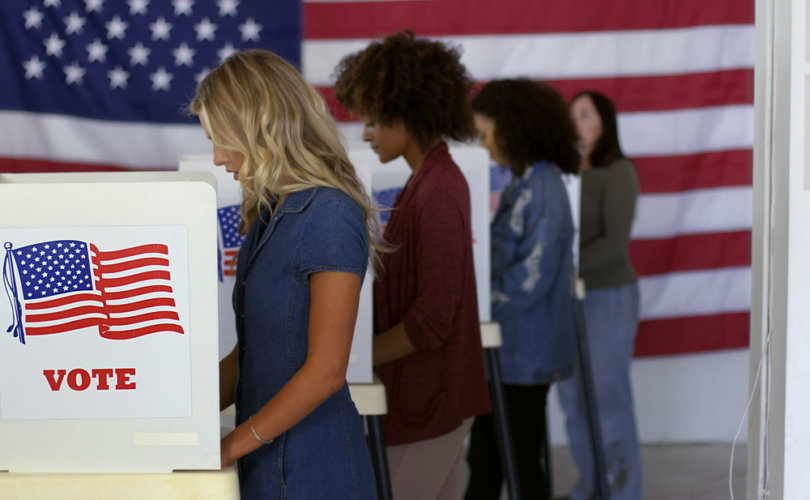 (LifeSiteNews) — Is it 2024 yet? Unfortunately no, but it is 2022, which means we’re officially less than a year away from the midterm elections on November 8. And if the American voters play their cards right, those elections could very well mark the beginning of a change in tides for the fortunes of our country and its people.

But, as any good politico could tell you, the midterms don’t just happen on Election Day — in fact, they’ve already begun, and we’re just over a month away from getting the first results, giving people like me who actually love this stuff an early peek at what the rest of this cycle may have in store, and what it could mean for the final results this fall.

With a third of the Senate, 36 out of 50 governorships, and the entire U.S. House of Representatives on the line, 2022, no matter the final outcome(s), will be big. And as is often the case in any election, what happens in November might actually be decided much earlier in the electoral process, when the parties formally nominate their standard-bearers by way of each individual state’s primary.

Here are five of the most competitive primaries from across the United States and for offices at all levels of government to keep an eye on this year — and that may very well prove bellwethers for the future of both major parties, and the country as a whole.

Pro-life Democrats are an endangered species in the United States today, and when looking at U.S. House membership, they’re nearly extinct. That’ll certainly be the case should Congressman HENRY CUELLAR find himself unable to stave off another challenge from the far left in 2022.

Arguably the most conservative and last anti-abortion Democrat in the lower chamber, Cuellar has generally found himself a good fit for CD-28, a border district whose population is nearly 80% Hispanic and equally suburban. But as the “mainstream” for Cuellar’s party continues to not only inch, but leap further and further leftward, Cuellar’s finding it a more and more difficult task to hang on. Two years ago, he eked out a tight 52-48% victory over attorney JESSICA CISNEROS, an ally of Alexandria Ocasio-Cortez, in the Democratic primary, and she’s prepping for a rematch this year, putting Cuellar’s appeal to the test yet again in what has the scent of a concerted national effort among the socialist left to end his congressional career.

And in a district that’s starting to look swingier by the cycle (Clinton won it in 2016 by 20 points, but Biden only managed to carry it by 4 in 2020) due to (1) Democrats’ dismissive attitude toward illegal immigration as an issue in the first place, (2) Hispanics’ recent shift toward Republicans at the ballot box, and (3), as will surely be the case in this year’s midterms, Biden’s disastrous handling and general negligence of the ongoing crisis at the border, the left just may be cutting off their nose to spite their face.

Because in the event of a Cisneros nomination, what was once a solidly blue district in southern Texas may soon find itself ground zero in Republicans’ wide-encompassing crusade to win back the House majority. Put simply: A lot could go wrong for Democrats in CD-28 this year.

When it comes to the ongoing debate over election integrity and voting reform, there may be no more consequential election in 2022 than Georgia’s race for governor.

Stacey Abrams, who lost the election four years ago and never conceded, is once again being force-fed to Peach State voters this year, and with a clear path to the Democratic nomination, the former Georgia House Minority Leader and founder of Fair Fight Action is playing her hand as if she were the incumbent herself.

That may be because the real incumbent, BRIAN KEMP, who defeated Abrams in 2018, finds himself in an unusually precarious situation: Conservatives began turning against the governor due to his administration’s lackadaisical response to allegations of fraud and irregularities during the presidential election and, even after signing legislation to strengthen election security in the aftermath, he’s been unable win back their trust.

This dissatisfaction led VERNON JONES, an ex-Democrat state legislator and vocal Trump supporter, to launch a primary bid against Kemp, but several personal controversies have kept his campaign from catching fire. As a result, former U.S. Senator DAVID PERDUE, who was defeated by Jon Ossoff in last year’s devastating duo of Peach State runoff elections, has also entered the race, and, with the backing of President Trump, remains Kemp’s greatest competition.

If Perdue is able to successfully define Kemp as weak on the issue of election integrity (as has been attempted by Trump for the last year), and can articulate an alternative strategy to address the issue in time for 2024 should he be nominated and elected in his place, the current governor will unquestionably face an uphill battle. And that’s without accounting for Georgia’s law requiring a candidate to win an outright majority (50%+1) of the vote, or face a second one-on-one runoff with their closest-placing competitor — a situation that may very well benefit Perdue, even if he’s not the top vote-getter in the first round, without a second anti-Kemp spoiler candidate in the mix.

Just how powerful is Donald Trump’s endorsement as we head into the midterms? We’ll likely learn from the Tar Heel State.
Incumbent U.S. Senator Richard Burr, a pro-impeachment Republican, is retiring at the end of his term, leaving the GOP primary to replace him a virtual free-for-all in this red-tilting swing state. Under typical circumstances, the clear frontrunner would be PAT MCCRORY, the state’s former governor, due to the vast advantages that tend to come with his status as a previous statewide officeholder. But McCrory’s facing a tougher-than-expected challenge from TED BUDD, a conservative congressman whom President Trump endorsed for the seat at the North Carolina GOP convention last summer following his daughter-in-law Lara’s decision to forgo mounting a bid of her own.

McCrory, who also served as the mayor of Charlotte, benefits from near-universal name identification thanks not only to his term as governor, but also several statewide campaigns that helped build his profile along the way. However, some Republicans are skeptical about his ability to win the general election; the last time McCrory sought political office in 2016, he shared the ballot with Trump, who carried the state against Hillary Clinton by nearly 200,000 votes while McCrory, himself lost re-election to current Democrat Governor Roy Cooper.

Trump voiced this same concern when endorsing Budd, who remained a stalwart Capitol Hill ally to the 45th president during his time in office. Additionally, Budd was one of 139 U.S. House members to challenge the results of the 2020 election, and even signed onto an amicus brief supporting Texas’ lawsuit against Pennsylvania, Michigan, Wisconsin, and Georgia for their mishandled administration of the election, surely garnering him further favor with Trump going into 2022.

Polls have showed a neck-and-neck race between McCrory and Budd, with another Congressman, MARK WALKER, fading into the second tier and poised instead to withdraw from the race and seek another term in the House — a deal brokered by Trump to boost Budd.

In what will be New York Democrats’ first major political test since Andrew Cuomo resigned in disgrace last fall, a handful of high-profile candidates are lining up for a primary that’s likely to pit insider-versus-outsider in a telltale battle for control over the Empire State.

Current Governor KATHY HOCHUL, who took the reins after Cuomo’s departure and has seldom changed her predecessor’s course, currently finds herself way out in front of the still-fluctuating field, but that doesn’t mean she’s in clear: She’s only been on the job for a few months, and there are still doubts echoing from every corner of the Democratic Party about whether she has what it takes to stick around for the long-haul, or should only be considered an interim placeholder.

As a result, Hochul’s being challenged from both the left and the center. With the recent decisions of ex-New York City Mayor Bill de Blasio and state Attorney General Tish James to stay out of the race, progressives are beginning to coalesce around JUMAANE WILLIAMS, a self-proclaimed democratic socialist and NYC’s Public Advocate, while Long Island Congressman TOM SUOZZI has taken the mantle of the exceedingly obsolete moderate cause within the party, making this primary a real battle for the soul of the New York Democratic Party.

But could this imminent intra-party turmoil mean Republicans could be on the verge of a breakthrough upset in the fall? It’s still unlikely, but expect typical Democrat drama and the ghost of governors past to make this race — from the primary through the general election — far more consequential on a national scale than a typical New York gubernatorial election would be.

Of the ten House Republicans to vote in favor of pointlessly impeaching President Trump just days before he left office, none have remained more consistently vocal in their opposition to and disdain for the 45th president than LIZ CHENEY, the daughter of former U.S. Vice President Dick Cheney, who has represented Wyoming’s single statewide district since 2017.

But that vote hasn’t come without its consequences: In the time since, House Republicans voted to oust Cheney from her leadership role as Conference Chair, while the Republican Party of Wyoming both censured the Congresswoman and, in November, agreed to no longer recognize her as a Republican. But unlike other colleagues who supported impeachment, like Illinois’ Adam Kinzinger and Ohio’s Anthony Gonzalez, Cheney is bucking the trend and seeking re-election this year anyway, setting herself up for either a major comeback or one final, bruising rejection by her constituency.

As things stand now, the latter seems a likelier outcome: A straw poll of Wyoming GOP state committee members conducted just days ago saw attorney HARRIET HAGEMAN thrash Cheney in a 59-6 vote, giving the challenger what would seem to be an inside track to not only a potential endorsement from the party, but also the nomination for the seat, itself.

Hageman, whose entry into the race cleared what looked to be a crowded primary field that would’ve certainly benefited the incumbent, is a former friend of Cheney’s, but contends that her now-opponent “betrayed Wyoming, she betrayed this country, and she betrayed me.” She also has the “complete and total” endorsement of President Trump, even though she’d been a Cruz delegate during the 2016 race.

As for Cheney, she’s still not backing down, but it remains to be seen how much weight her family name still holds in Wyoming GOP circles, and whether multiple lingering, lesser-known candidates can divvy up the MAGA vote enough to keep her afloat with likely just a plurality of support. But as the recent electoral fortunes of candidates named Bush, Kennedy, and (of course) Clinton could attest, it may be too-little-too-late for a dynastic establishment lackey to prevail in an era defined by outsider-ignited populism.