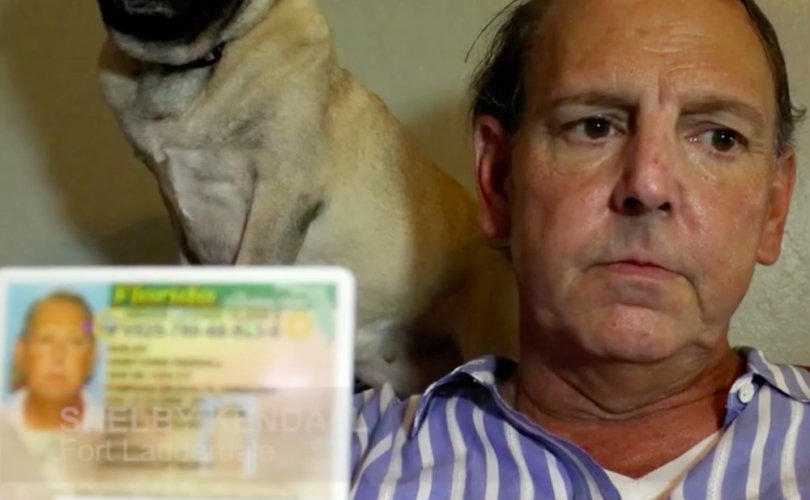 Shelby Kendall is a biological male, but his Florida driver's license lists him as a woman.

Fort Lauderdale cop James Brinton is being disciplined and the entire city police force is being made to undergo transgender sensitivity “training” because …  Brinton actually listed a man as “male.”

The man in question, 48-year-old real estate agent Shelby Kendall, is indeed male, but in 2014 he filed to have his driver’s license changed to read “female.”

Foolishly, the state of Florida did just that. With the touch of a delete button, Kendall was given a bureaucratic sex change and officially declared by the government a “woman.”

In January, Officer Brinton caught Kendall drag racing on a public highway. Brinton pulled him over and began to give him a ticket for reckless driving.

This is where the plot thickens. Rather than list his biological sex, the police computer that filled in Kendall’s driver’s license information on the ticket listed him as female. Brinton thought it was a mistake and corrected it.

In the meantime, Kendall tried to get away in his Camaro — or so the officer thought (Kendall claims he was simply getting out of another driver’s way). Brinton jumped out of his cruiser, cuffed Kendall, called for backup, and later rebuffed him when Kendall said something about being a woman.

After all, it is Fort Lauderdale, the southeast’s San Francisco.

Fast forward just four days after the traffic stop. Kendall went to the police department’s internal affairs and filed charges against Brinton for “mis-gendering” him on the ticket.

Think about that. Telling the truth to a man who desperately fantasizes that he is a woman is a crime in Fort Lauderdale.

George Orwell wrote, “Freedom is the freedom to say that two plus two make four. If that is granted, all else follows.” Jesus said it is the truth that gives us freedom.

But today’s gay agenda requires lies. Lies that sodomy is healthy and/or an expression of love. Lies that two people of the same sex can be “married.” Lies that a man is a woman, or vice versa.

And everyone has to lie, or at least go along with The Big Lie that one can actually change sex. Otherwise, the entire transgender edifice comes tumbling down.

Orwell also wrote, “If liberty means anything at all, it means the right to tell people what they do not want to hear.” Too bad cops can’t do that in Fort Lauderdale.

Next in the Kendall saga came bureaucracy at its worst. A cadre of investigators interviewed and researched the incident thoroughly.

The police investigators threw fellow officer Brinton under the bus. They recommended that their brother cop be officially reprimanded for his heinous insensitivity.

Calling a man “male” is now discriminatory hate speech. And the rub is, those most needed for backup and support turn against those who speak reality.

After all, the greatest crime is no longer murder or rape, it is questioning societal dictates. Or just plain telling the truth.

Orwell’s famous warning of a dystopian world order noted that the first to go was the admission of reality. “The very concept of objective truth is fading out of the world,” he wrote.

Further politically-correct humiliation ensued. Brinton was hauled before the Citizens Police Review Board on Monday. He explained he wasn’t trying to bully Kendall. He honestly thought the information someone input in the department computer was in error.

Nevertheless but not surprisingly, the liberal citizens’ board went against law enforcement, too. Only they upped the ante.

They decreed that Officer Brinton should be reprimanded, and that the entire city police department must have training on how to lie in order to appease transgender delusions.

Then it was Fort Lauderdale Police Chief Rick Maglione’s turn to crucify Brinton on the cross of politically correct falsehood.

First, Maglione said correct department procedure is to go by information on a driver’s license — as if Brinton had done something wrong in trying to correct a mistake.

Second, he made sure to add the zinger, “We endeavor to take appropriate action … where it is alleged we veered from that position.”

“Appropriate action” is to leave a permanent blot on a law enforcement officer’s record for calling a guy “male?”  Let alone the physical, biological, logical, common-sense, reality-based fact is that Brinton was right, no matter what intrinsically disordered society claims.

The police chief would only be so carefully vague (“veered?”) in order to give the impression that Brinton did something terribly wrong, when in fact he didn’t.

Third, just to be absolutely clear that Brinton’s honesty was intolerably inappropriate, Maglione noted, “I believe the department’s actions concerning the investigation before the Citizens’ Police Review Board clearly illustrates our commitment.”

Yeah, “commitment” to send your fellow officer up the river.

Nice to have your chief back you up, isn’t it? It seems to me the only thing Maglione illustrated is that he cowers before politically correct pressure to the point of selling out his own team.

Maglione further emphasized his personal assurances that his department “is committed to the equal treatment of all of our neighbors and visitors.”

Is there no end to this transgender lunacy?

It used to be the one person you could count on to give you a straight answer — no matter if you liked it or not — was a policeman. Not so anymore, at least in Fort Lauderdale.

If the cops themselves are so afraid of homo-intimidation that they don’t tell the truth, or worse, can’t see the truth, what’s the average citizen to do?

If the law says black is white and unreality is reality, what’s an honest person to do? I say Christians should tell the truth, no matter what.

Final disciplinary decision-making for Brinton is up to the Fort Lauderdale city manager.  But I’m not holding my breath.

“In a time of deceit, telling the truth is a revolutionary act,” Orwell penned. Let’s be revolutionaries, shall we?