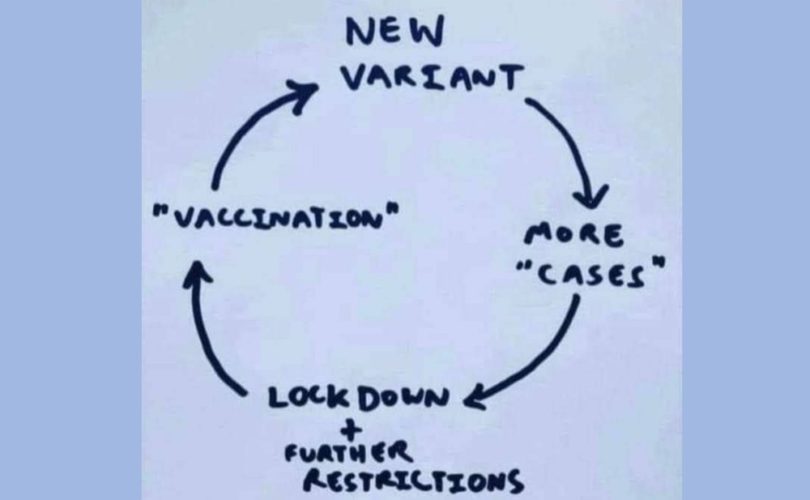 June 29, 2021 (The Dossier) – You wouldn’t know it by following the corporate press and the usual suspects who traffic in endless amounts of COVID Mania fear mongering, but the actual data on the much hyped Delta variant (sometimes referred to as the Indian variant) that you keep hearing about doesn’t fit the “deadly” virus narrative that is being advertised to the public.

Don’t take it from me. Here’s the data straight from the U.K. government, which is tracking this mutation as sporting a case fatality rate of 0.1%.

Now, a case fatality rate (CFR) is many times higher than the actual death rate (infection fatality rate, or IFR), because the vast majority of COVID-19 cases go undetected. Through my previous reporting, I’ve found that the World Health Organization runs its numbers based on the estimate that 1 in 20 cases are detected, while the CDC bases its estimates on a 1 in 10 ratio.

In plain english, this means that based on CDC and WHO guidelines, the Delta variant’s death rate is actually significantly lower than the 0.1% number that appears in the U.K. government docs.

There are many statements asserting that the Delta variant is more deadly than Alpha. There are no data to back that up https://t.co/xBWAB0B6Mo
“The crude case fatality rate remains lower for Delta than other variants at present” @PHE_uk /1

Additionally, there is still the “dying from COVID” versus “dying with COVID” problem in this calculation. In places like the U.K., any death that occurs within 28 days of a positive COVID test is labeled as a COVID death. They don’t conclude if a positive test has actually contributed to that death in any meaningful way.

Now, observe the detachment between this infinitesimal threat and the fear mongering campaign surrounding it.

“NO MORE THAN MERE SECONDS” of exposure in 10-60 centimeters where one man triggers several #DeltaVariant infections with brief “fleeting” contact. Thousands of shoppers at NSW���� mass tested. Delta called “near & present danger”.

With the deadly delta strain of the coronavirus circulating around Sydney, will the two-week lockdown be long enough to stop the spread? https://t.co/j5LWiK2JMc #TheLatest #7NEWS pic.twitter.com/aLD0rubSe0

Here’s the deal: The Delta variant is more contagious, it’s deadlier, and it’s spreading quickly around the world – leaving young, unvaccinated people more vulnerable than ever. Please, get vaccinated if you haven’t already. Let’s head off this strain before it’s too late. pic.twitter.com/9gBeRpvCe8

The Delta variant weighs in at such a low, inconsequential death rate that it becoming the dominant strain (with an actual death rate registering multiple times under that of a seasonal Flu) should actually be celebrated as a relief for humanity, yet the people who want to rule over us like power drunk despots would not benefit from such an admission. Using the word “deadly” to describe this mutation is simply total propaganda, and a complete assault on our language.

The Circle of COVID pic.twitter.com/RaBOLRhgYQ

Of course, there was never a reason to rob us of our liberties in the name of attempting to control the spread of a virus. And especially with the Delta case, the argument for further restrictions immediately falls apart upon examination of the data. If only they followed the science!