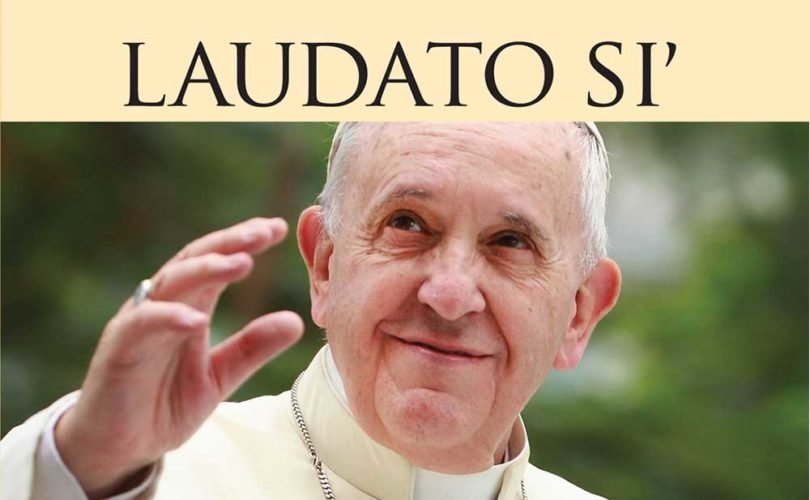 The encyclical’s callow environmentalism will make feeding the starving more difficult, not less

July 2, 2015 (Catholic Herald) – I recently begged the Holy Father, in this magazine’s print edition, to be very careful in anything he might say about global warming in his then forthcoming (but, alas, now published) encyclical on the environment, not least because there has actually been no global warming to speak of for more than 18 years now and because the supposed “consensus” on the subject was being increasingly questioned.

Mainly, however, it was because the subject has been so heavily politicised. As I wrote in the article, it has become a matter of public controversy, involving massive public funding and the striking of political postures. As Richard S Lindzen, emeritus professor of atmospheric sciences at the Massachusetts Institute of Technology, illuminatingly comments: “The public square brings its own dynamic into the process of science: most notably, it involves the coupling of science to specific policy issues…. This immediately involves a distortion of science at a very basic level: namely, science becomes a source of authority rather than a mode of inquiry.”

“Scientific” claims then become simply political assertions. We have been listening to political environmentalists like Al Gore for years now, partly discounting what he says ever since his alarmist film An Inconvenient Truth was shown to be so full of wild claims, such as that Hurricane Katrina was caused by global warming (there is no evidence at all for this), and that polar bears as a species were under threat from drowning because of melting polar icecaps (on the contrary, the polar bear population has been growing so much it has to be regularly culled): and, anyway, polar ice, if we include the Antarctic, is growing rather than shrinking.

We need, to say the least, to treat the “science” of global warming with extreme care. Any such hesitations, however, form no part of the Pope’s thinking: his encyclical is in places like Al Gore on steroids.

Laudato Si’ appears closely to reflect the influence of the environmentalist Hans Joachim Schellnhuber, a pillar of the UN’s tendentiously political Intergovernmental Panel on Climate Change (IPPC), who has been described in the New York Times as “a scientist known for his aggressive stance on climate policy” and who the Pope recently appointed to the Pontifical Academy of Sciences, despite his other beliefs (he is hardly a Catholic thinker).

As the Vatican correspondent Edward Pentin comments: “Critics have warned that by falling in with proponents of climate change science, the Pope risks getting too close to other key supporters of the theory who support population control and abortion.”

Schellnhuber, perhaps not surprisingly given his current prominence as a papal adviser, claims not to be in favour of population control, but that is of course ridiculous, and even in the recent interview with Pentin in which he is taken to be repudiating the idea of limiting the world’s population, he can’t hide his real underlying assumptions.

Here he is: “If you want to reduce human population, there are wonderful means: Improve the education of girls and young women. Then the demographic transition will be a little bit faster… So I subscribe to a good education, and that’s the only way of population strategy I would support.”

Parts of the encyclical are crude in the extreme. “A number of scientific studies indicate,” says Pope Francis, though without specifying which, “that most [that’s right, he says ‘most’] global warming in recent decades is due to the great concentration of greenhouse gases (carbon dioxide, methane, nitrogen oxides and others) released mainly [I repeat “mainly”] as a result of human activity.”

Actually, only about five per cent of present atmospheric carbon dioxide is derived from the use of fossil fuels; that is, just 19 parts of CO2 per million parts of atmosphere. Most CO2 is a natural part of the atmosphere. It is not pollution: indeed, human life is largely dependent on it since without CO2 there could be no growth of any kind of vegetable matter: no CO2, no trees. No trees, no oxygen. And yet Francis writes that “Carbon dioxide pollution increases the acidification of the oceans and compromises the marine food chain”: It’s a dubious theory put forward by some: but it is far from having been proved.

The danger of getting too closely involved in the politics of climate change is that they destructively divert our attention, (and that “our” includes the Pope himself), from a political imperative one would have thought much closer to the heart of what Francis, and with him the Church, really cares about. He has always claimed, with evident sincerity, to be on the side of the poor. And yet he attacks fossil fuels, their chief energy source, which he does admit are “at the heart of the worldwide energy system”.

So how are the poor to cease to be poor? Only as a result of their economic development. As Charles Moore asked on Saturday: “Why is the developed world rich? The answer lies in the name: it developed more than other places. Development happens by uniting the resources of the earth with the capacities of the human brain and the institutions of human society. The resulting innovations are driven by energy, the cheaper the better. Hence the overwhelming historic (and present) importance of fossil fuels.”

Developing nations, he unanswerably argues, “see this clearly. Countries like China and India have at last become industrially successful and internationally competitive. If their energy becomes more expensive, their development will stall. They scorn what they see as the hypocrisy of the West which, having done so well out of fossil fuels, now wants a binding global agreement to prevent them doing the same. They will accept green energy only if the price is right. At present, it isn’t. So they won’t agree to ‘save the planet’ just because rich Westerners tell them they should. Even loyal, Catholic Poland will not stop its heavy use and sale of coal.”

The fact is that if we really care about feeding the poor, environmentalist fads like the global warming obsession destructively divert our attention from what should be our real priorities. This is true of other environmentalist nonsense, like the campaign against GM foods (by which millions of the poor have been saved from starvation), a campaign by which the Pope has also clearly been strongly influenced in Laudato Si’ (§§ 133-4): he has, it seems become a fully-fledged green.

He concedes, in the classic formula that no “conclusive” proof exists that GM foods are harmful; but this implies that, proof or no proof, they are risky. The fact is that there is general agreement that food derived from GM crops poses no greater risk to human health than conventional food. The anti-GM greens argue vociferously that GM foods are objectionable on grounds including safety, environmental impact and the fact that some GM seeds that are food sources are subject to intellectual property rights owned by corporations: and the encyclical supports these generally anti-capitalist arguments at some length.

Whether Pope Francis is getting all this from the atheist Schellnhuber, I don’t know: but it’s certainly entirely consistent with the professor’s general ideological stance. So when the Holy Father tells me, as he does in his encyclical, that Laudato Si’ is now to be regarded as part of the social teaching of the Church, along with Rerum Novarum and Centesimus Annus, I must and I believe we all must, respectfully decline to accept what he says. Social teaching of a sort it may be: but given its content and its openly acknowledged intellectual sources we have to say that consistently “Catholic” it is not.

This article was first published on England's Catholic Herald website and is re-published with permission of the author.