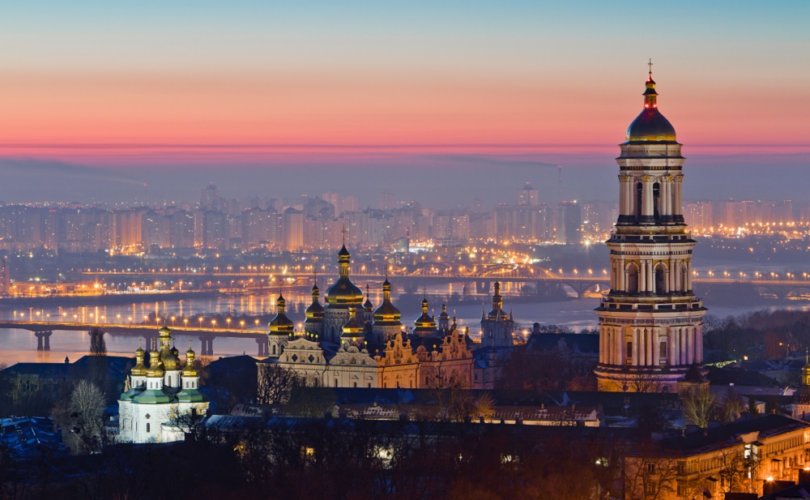 KYIV, Ukraine, March 19, 2020 (The Daily Signal) — Ukraine has gone into a nationwide lockdown to stop the spread of the coronavirus.

As of Tuesday, the country is completely closed to foreigners. All international air traffic has stopped and Ukraine’s land borders are closed, too.

Ukrainian citizens stuck abroad have been instructed to go to their nearest consulate so they can get a seat on a chartered flight home. All domestic air, train, and bus travel has been suspended.

Here in the capital city of Kyiv, the only businesses allowed to stay open were grocery stores, pharmacies, and gas stations. The government has ordered everything else closed. Schools, gyms, malls, movie theaters, barbershops, museums. Everything.

Not abiding by these rules is a crime, enforceable by arrest.

“The current measures may look harsh today, but two weeks later we may all be thankful that they were introduced,” said Vasyl Myroshnychenko, 39, co-founder of the Ukraine Crisis Media Center.

Rattled by the impending lockdown, Ukrainians rushed the supermarkets Monday to stock up on food and other supplies. Shoppers jostled each other trying to get to the last bit of certain things such as canned goods or buckwheat groats.

At the glitzy Le Silpo supermarket in Kyiv’s city center, the shelves were left barren in the wake of the panicked purchasing. It was madness.

Some younger Ukrainians on social media compared the coronavirus crackdown to the opening scenes of a zombie movie. However, for older Ukrainians who can remember life in the Soviet Union, this whole crisis feels, well … eerily familiar.

“Parliament’s current decisions on quarantine … are a purely Soviet measure to subdue society,” said Viktor Zherditskiy, 63, a resident of Kyiv.

Ukraine’s older generations remember everyday life under Soviet rule, with its myriad restrictions and deprivations. They also retain a deep-seated distrust of the government in a time of crisis — an attitude that stems from, among other things, the 1986 Chernobyl nuclear disaster.

“When the government authorities start stroking the heads of their citizens, and in a quiet voice try to convince them that everything will be fine, the more I begin to worry,” said Sergiy Tsyhipa, 58, a Red Army veteran and former special operations soldier.

However, for Ukraine’s millennials — for whom the Soviet Union is not a living memory — the coronavirus lockdown is unprecedented and extraordinary.

“In my opinion the virus isn’t the biggest problem,” said Igor Didenko, 31, who lives in Kyiv. “Nowadays, the main problem is panic, and this panic leads to serious problems for our people. Like increasing prices for food and medicine.”

Younger generations are used to fully stocked grocery stores, where you can buy practically anything you’d find in a Whole Foods or a Trader Joe’s store back in the U.S. Young Ukrainians are used to trendy Western retail shops, Apple products, IMAX movie theaters, and the convenience of Uber and Uber Eats.

It’s all available in Kyiv these days.

Ukraine’s millennials have gotten used to a certain Western standard of living. They grew up watching many of the same movies and TV shows, and listening to much of the same music, as their American contemporaries.

In this globalized era, that’s not necessarily unusual. But it’s definitely a far cry from Soviet times, when it was illegal to possess a Western rock record obtained on the black market.

Young Ukrainians are used to many of the same freedoms and opportunities that we, as American citizens, take for granted. The freedom to travel, too, has become an expectation.

In 2017, the European Union approved visa-free travel for Ukrainian citizens. Prior to that, Ukrainians had to spend hundreds of dollars on complicated visa applications to travel to Europe. (Russians still do, by the way.)

Nowadays, though, thanks to the EU’s landmark decision, Ukrainians can simply hop on a plane at their whim and go see the Continent.

It’s become a badge of honor among young Ukrainians to pepper their Facebook or Instagram feeds with photos of their European escapades. Older Ukrainians can hardly believe it. For them, such easy and unfettered access to Europe would have been unthinkable in their youths.

Thus, for younger Ukrainians, the COVID-19 crackdown is uncomfortably exposing them to how their parents and grandparents used to live — not just during the Soviet era, but in the years immediately after the U.S.S.R.’s dissolution in 1991.

Life in the 1990s, after all, wasn’t much easier than during the Cold War. A decade of near anarchy followed the Soviet collapse; it was a time of economic and societal collapse.

In fact, during the 1990s, Ukraine’s population and its industrial output decreased by a larger share than during World War II, when Ukraine was the deadliest battlefield of the deadliest war in human history.

There was a certain “survival of the fittest” mentality that one had to adopt to make ends meet in Ukraine in the 1990s as the economy self-imploded and criminals took over the government. When the banks privatized, many people lost their life savings.

Like the Soviet era that preceded it, the 1990s left a permanent impression on the mentalities of many Ukrainians who lived through it. You now see evidence of this while in line at supermarkets when people of a certain age press forward as if the cashier might close down the register at any random moment.

Or at Kyiv’s Boryspil International Airport, when some Ukrainians line up at their gate more than an hour before their flight’s boarding time — as if they might be barred from boarding the aircraft if they’re not waiting at the front of the line.

Now, with the coronavirus lockdown in full swing, those older generations are being reminded of the hard times they lived through, which have forever forged their mindsets.

“Coronavirus is another catastrophe for our country,” said Tsyhipa, the Soviet army veteran.

For younger Ukrainians, this whole crisis has been an education in what that they’ve been fighting for since 2014. After all, it was Ukraine’s millennials who led the way in overthrowing the corrupt, pro-Russian regime of Viktor Yanukovych during the country’s 2014 “Revolution of Dignity.”

After Russia invaded that year, it was the younger Ukrainian generations who rose up and led a grassroots war effort. With no propaganda prodding, they banded together into civilian volunteer battalions and struck out for the eastern front and turned back Russia’s forces.

Those young Ukrainians fought back when their homeland was in peril and earned their country’s long-awaited independence from Russia. And in government halls across the country, young Ukrainians also have shouldered the simultaneous fight against corruption.

Across Ukraine today, empty pedestals mark the spots where Soviet statues of Vladimir Lenin once stood. Every street, town, or city in Ukraine that once bore a Soviet name has been renamed in the Ukrainian language. It’s now technically illegal in Ukraine to play the Soviet national anthem, or to wave the Soviet hammer-and-sickle flag.

Young Ukrainians have a dream for a better life, and they’ve proven time and again that they’re brave enough to fight for it. They know what they’re fighting for — that’s clear.

And now, thanks to the coronavirus crackdown, they understand a little better what they’re fighting against.

Yes, the COVID-19 pandemic will pass, and life will go on. The borders and the stores will reopen, people will go back to work, and the grocery store shelves will be replenished.

But life never tastes sweeter than in those moments when you think you might lose it. The same goes for freedom and opportunities.

Americans might well take stock of how life has changed for them during the coronavirus crisis, but also of how lucky they are to be Americans. Because the coronavirus lockdown is what life was like every day in the Soviet Union.

Remember, a microscopic virus isn’t the only way in which we may lose our freedoms, and the fruits of our democratic way of life. We’re perfectly capable of doing those terrible things ourselves, with or without Mother Nature’s help.