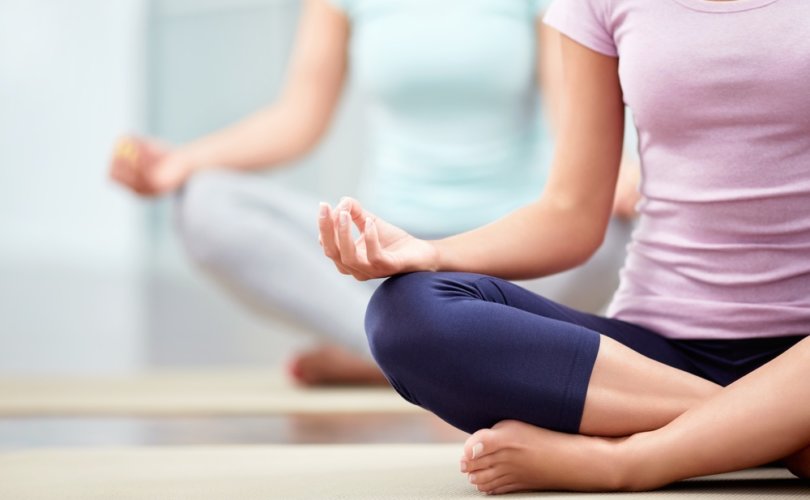 June 25, 2018 (The Catholic Gentleman) – I recently visited the website of a popular company that sells products like deodorant and toothpaste with natural ingredients. Curious to learn more about the business, I visited their blog which was purportedly about the latest trends in health and wellness.

What greeted me was not what I expected. Rather than tips on exercise or healthy eating, the blog featured stories about the healing power of crystals and the benefits of tarot card reading. This was at once surprising and unsurprising, for new age and occult practices, in all their various forms, are experiencing a major resurgence, especially among millennials. But from a company that sells toothpaste?

It is no exaggeration to say that, despite the best efforts of the New Atheists, our culture is more awash in spirituality than ever before. One can hardly go anywhere today without seeing products, articles, and popular gurus encouraging practices like yoga, meditation, reiki – and now, tarot and crystals – as essential to a healthy lifestyle. In the realm of entertainment, hugely popular series like Harry Potter, Star Wars, and Game of Thrones all draw on themes of magic and the supernatural.

What are we to make of this ?

From a Christian perspective, many of these trends are undoubtedly suspect or downright heretical. And yet, we should think carefully before issuing anathemas, for while misguided, many of our culture's flirtations with the occult really betray a deep hunger for the supernatural.

Theologian Alexander Schmemann once said, “To condemn a heresy is relatively easy. What is much more difficult is to detect the question it implies, and to give this question an adequate answer.” He was right. As Catholics, we are often in such a rush to point out what is wrong with neo-pagan practices that we miss the deeper questions they imply. And we certainly fail to give them a satisfying answer.

The truth is, our culture is starving for the supernatural. My generation has been raised to believe that we are nothing more than accidentally advanced apes on an unusually lucky space rock floating in a meaningless sea of nothingness in a universe that could care less whether we lived or died. It is despair inducing in the highest degree. Moreover, we have been told, nearly since infancy, that science has answered nearly all questions of existence, and if any remain unanswered, they will be resolved quite soon. For every question, there is an answer, even before you ask it. Existence is thus no longer wonderfully strange and awe-inspiring, but mundane and prosaic.

As a result, young adults today are desperate for an encounter with authentic mystery. Things like astrology and crystals are attractive because they are strange and defy the scientific-materialist paradigm. There are certainly explanations for how they work, but they require a level of faith. And despite what the pompous atheists claim, we want to have faith in something we can't fully explain. We are fundamentally religious beings, and we instinctively know there is more to the world than meets the eye. We are hungry for magic and mystery and will embrace the first thing, rightly or wrongly, that offers it.

The Failure of Christianity

Now, you  may be reading this and thinking that Christianity, especially Catholicism, believes and proclaims the existence of supernatural realities, so why abandon it for neo-pagan practices? Wouldn't their hunger for the supernatural be satisfied at their local parish?

Yes and no. Yes, because the supernatural mysteries taught by the Church do exist. No, because in practice we so often deny them.

We claim to believe in angels and archangels and a host of saints who join us in worship. Yet, we strip our churches bare and make them into beige-carpeted business centers, rather than holy temples.

We claim to believe that each Mass is a miracle that brings God bodily to dwell among us. Yet we make our liturgy a comfortable affair, eliminating anything that is difficult, disorienting, awe-inspiring, ancient, or mysterious. We sing cheesy ditties, hold hands, and pass out the greatest mystery of all, the Holy Eucharist, like a snack in a cafeteria.

We claim our priests have supernatural powers to consecrate, bless, and preach. Yet we water-down or change their sacred formulas, eliminate their rituals, and distribute their duties to laymen as often as possible.

We claim to believe in the Almighty, the Creator of all before whom the burning spirits veil their faces, yet we insist on dragging him down to our level to accommodate our needs and sins. We say we believe in supernatural mystery, but we do all in our power to destroy it at every turn.

If lex orandi, lex credendi is true, then we simply do not believe what we say we believe.

To be perfectly honest, we have failed to offer an encounter with mystery for some time now. The mass abandonment of the faith by young people is not so much a sign of their wickedness as an indictment of our own practical unbelief.

As Catholics, we long ago turned the faith into an intellectual game devoid of mysticism, priding ourselves on our clear philosophy and well articulated theological frameworks. But the letter without the spirit, philosophical theology without mystical encounter, kills. It is a head without a heart, and it cannot give life.

When the world walked away – tired of textbook answers and hungry for the Transcendent Mystery – we became not less worldly but more worldly. We embraced modern, secular modernity, stripping our faith of nearly everything supernatural, and we lost any credibility we had left.

The truth is, most of us live like complete secularists the vast majority of the time. We claim to believe in supernatural realities, but compartmentalize them to one hour, one day per week – and perhaps not even that. Heaven is always somewhere out there, and never really upsets my daily existence. We aren't taken seriously by modern men and women hungry for the supernatural because we don't believe in the supernatural, despite what we say.

I have been critical to this point because it upsets me to see countless Catholics practically deny the supernatural realities of our faith with banal liturgies and disrespect or even disdain for the holiest things of our religion, and then see the same Catholics criticizing the errors of wayward neo-pagan youth. Until we take our own faith seriously, no one else will.

But I don't simply want to criticize; I want to offer a solution. The answer is not difficult to discern. It is simply this: Emphasize the supernatural reality of our faith at every turn, recover those traditions which preserve and honor this reality, and thus offer an encounter with what one theologian termed the mysterium tremendum et fascinans – the Great and Awesome Mystery – which is Almighty God.

For everywhere the Holy Eucharist is treated with awesome and painstaking reverence, everywhere buildings still appear to be and are treated like temples, everywhere saints are still venerated and angels called upon, everywhere priests are honored as the supernaturally-endowed mediators that they are, everywhere miracles are still believed in and occur, the faith is growing. And it is almost always young people who flock to such places.

If we want to be a viable alternative to neo-paganism, we need to embrace once again the supernatural traditions of our faith. Our sacred language. Our ancient and venerable rites and formulas. Our “superstitious” Catholic practices. Our symbols. Our mystical traditions of prayer. We don't need only more catechesis, as if ideas alone could save us. We need more mystery, more transcendence, more ritual, more magic, for lack of a better word.

Every Catholic must become a mystic, in the sense that we live like the supernatural is as real as the air we breathe – because it is. Then, and only then, will we be able to speak authentically to a world hungry for the divine.

Published with permission from The Catholic Gentleman.