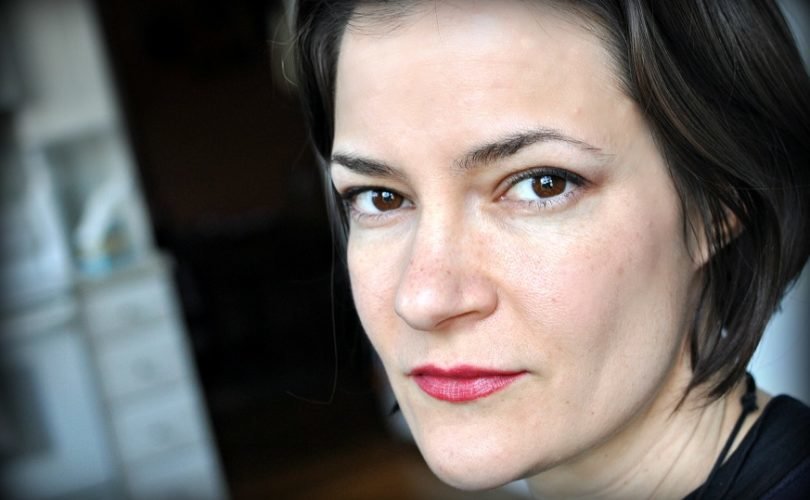 Editor’s Note: This is Part Three of a series on post-abortion recovery. Jewels Green is a post-abortive mother of three who worked in an abortion clinic before becoming pro-life. Read her original testimony here and her other articles here. You can read Part I in this series on post-abortion pain and recovery, “The day I tried to take my life to make the pain of my abortion go away,” and Part II, “After my abortion, the remaining drops of my sanity evaporated.”

December 19, 2011 (LiveAction.org) – After trying to kill myself to escape the overwhelming guilt after my abortion, I emerged from my month spent in an adolescent psychiatric unit with an incongruous newly-found zeal for abortion rights. Within weeks of my discharge from the psych unit, I found myself on a bus to Washington, D.C. to march for abortion rights and soon after I began volunteering as an escort for a first-trimester abortion clinic.

An advanced degree in psychology isn’t necessary to see that I was plainly trying to assuage my guilt (and protect my delicate and damaged psyche) by assuming the precise opposite of what I truly believed. Freud called this reaction formation, one of many coping strategies he dubbed defense mechanisms. I certainly took reaction formation to the extreme by espousing the most diametrically opposed position of my innermost heart when I accepted the offer of a job at an abortion clinic.

I completely bought the bill of goods I was sold: that abortion was somehow linked to women’s equality, that giving birth and making an adoption plan for an unwanted child (rather than killing it by abortion) was somehow unduly burdensome for a pregnant mother, and that countless women would die if abortion was illegal. (Naturally, I no longer believe any of that propaganda.) Combine all of this with my unconscious overwhelming need to repress/transform my personal feelings about my abortion—and my longing for my lost child—and it created the perfect recipe for a die-hard abortion rights advocate.

We all truly believed we were offering women an innocuous, much-needed, and unfairly-maligned “medical” service. Although violence was not common, every publicized incident—but especially the murders, as well as the non-violent invasion, occupation, and blockade of the clinic where I worked—steeled our resolve in our self-righteous insistence that abortion remain safe and legal. Not surprisingly, it is easy to discount the opinions of people you think are trying to kill you.

As strange as it may sound now, my years spent working at the clinic were some of the best of my life. The camaraderie at work created a family-like atmosphere—it was a nearly all-female workplace (with the exception of a few of the doctors)—and as a very young woman (I worked there from age 18 – 23) I found this inspiring.

Then I started having nightmares—nightmares that were no longer only about my lost baby—but about all of the babies killed by abortion where I worked every day, all of the babies killed by abortion everywhere. My sleep was haunted by tiny limbless phantom babies… But even then, my desire to survive in a world without my child—because I’d killed him—warped my mind into believing that if all of these strong, capable women I worked with thought abortion was OK, I must be able to believe that too. So I pushed down the unpleasantness—muzzled my pesky conscience—and I kept going back to work, day after day. It wasn’t until many years and innumerable nightmares later that I finally opened my eyes to the brutal and barbaric truth: abortion is murder.

A cold day a year ago, I found myself contemplating the bizarre and unnatural process of in-vitro fertilization and surrogacy. After learning of a surrogate mother who accepted payment of her surrogacy contract in full to abort the innocent baby with Down syndrome she was carrying for an infertile couple, something finally (finally!) clicked in my mind—pregnancy was now a commercial transaction: the little helpless human a commodity to be conceived, sold, bought, and disposed of at will—how gruesome and indefensible and reprehensible—and I had been a part of that “industry” for years.

My conversion to the pro-life worldview could never have happened without the courageous public testimony of Abby Johnson, the former Planned Parenthood Director who experienced a profound change of heart after watching an ultrasound-guided abortion, best described in her amazing book, Unplanned. Her courage and strength in the face of overwhelming opposition from her former employer (and former friends and co-workers) inspired the confidence I needed to fully change my mind and support the inherent right-to-life of all human beings from conception to natural death.

Within weeks of self-identifying as pro-life I began donating my time, talents, and treasure to the cause: I joined Feminists for Life, the Susan B. Anthony List, and Pennsylvanians for Human Life. Then I sought out my local chapter of 40 Days for Life and attended my first vigil outside of the hospital where my third son was born, and where abortions are performed. Next I began speaking to local church leaders about helping to support Amnion Crisis Pregnancy Centers. Taking these steps to help support the pro-life movement, and to foster the changing of hearts and minds, has been a transformative experience for which I am grateful. But I still miss my baby, and no amount of dollars I donate will make that pain go away.