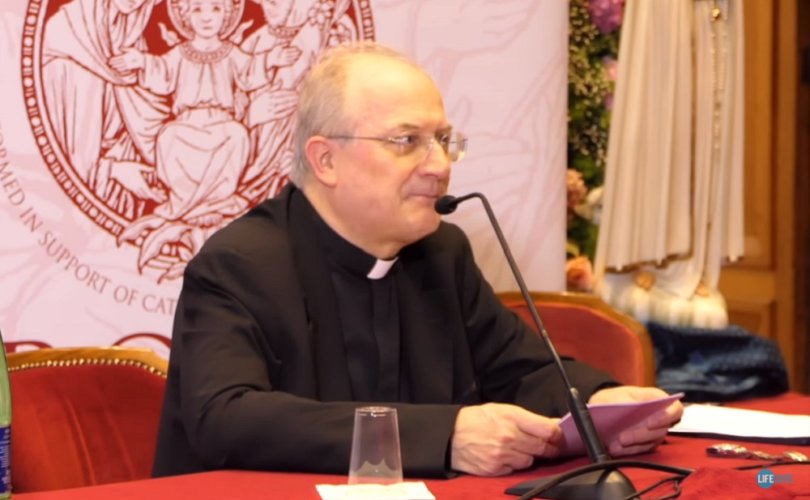 August 7, 2019 (CatholicCulture.org) — Pay careful attention to the statement by Msgr. Livio Melina regarding the radical change in orientation at the John Paul II Institute, where he, until recently, served as president:

If the decisions taken by Archbishop Paglia are not revoked, then what they are saying is: 'The interpretation of the magisterium of Pope Francis in continuity with the previous Magisterium is intolerable in the Church.'

Although he is openly critical of Archbishop Paglia, who is presiding over the ideological purge at the Institute, Msgr. Melina is also being diplomatic in his own way; he is carefully avoiding criticism of Pope Francis. Archbishop Paglia wants the revamped Institute to promote the thought of Pope Francis. Msgr. Melina does not oppose that goal; he wants merely to be allowed to explain how the thought of Pope Francis can be understood in the light of previous Church teaching. But such explanations, Msgr. Melina tells us, are “intolerable” to the Institute's new leadership.

Frankly I don't see how the thought of Pope Francis — particularly in Amoris Laetitia — can be squared with previous magisterial teachings of the Church. But Msgr. Melina is doing his best to reconcile them. And now, he tells us, that effort is “intolerable” to the prelate who heads the Vatican institution dedicated to promoting Catholic teaching on marriage.

The purge at the John Paul II Institute has eliminated the faculty members most closely associated with the thought of the Pope — and canonized saint — after whom the Institute is named. But if Msgr. Melina's charge is accurate, something even more shocking is taking place. If it is “intolerable” to say that Pope Francis is teaching in continuity with prior Church teachings, then it seems quite clear that the John Paul II Institute is now dedicated to the proposition that previous Church teachings should be discarded. According to Archbishop Paglia, as interpreted by Msgr. Melina, the Church must stop teaching what she once taught, and focus on the very different message advanced by Pope Francis.

That is a shocking, radical claim. Is Msgr. Melina overstating his case? Is he giving an unfair portrayal of Archbishop Paglia's goals? The Institute is not yet offering an explanation for the latest changes, asking for “a few weeks' time” to answer what should be recognized as an urgent question.

Bear in mind that up until this month Msgr. Melina has not been an alarmist. He has not condemned Amoris Laetitia; he has, again, sought to reconcile that document with prior authoritative teaching.

It's significant, too, that Msgr. Melina made his statement to La Verità after he had met with Pope-emeritus Benedict, and spoken with the former Pontiff about the turmoil at the Institute. It's fair, isn't it, to assume that if Mgsr. Melina perceived a crisis in the Church, he would have discussed that crisis with Benedict? And apparently Benedict said nothing to sway the younger theologian from his view that that this was, indeed, a crisis. I do not mean to suggest that Benedict endorsed or encouraged the statement that Msgr. Melina made; I doubt that he would do so. But evidently the retired Pope did not discourage him. Benedict reportedly expressed his “solidarity” with Msgr. Melina, who came away from their conversation resolved to call attention to the crisis.