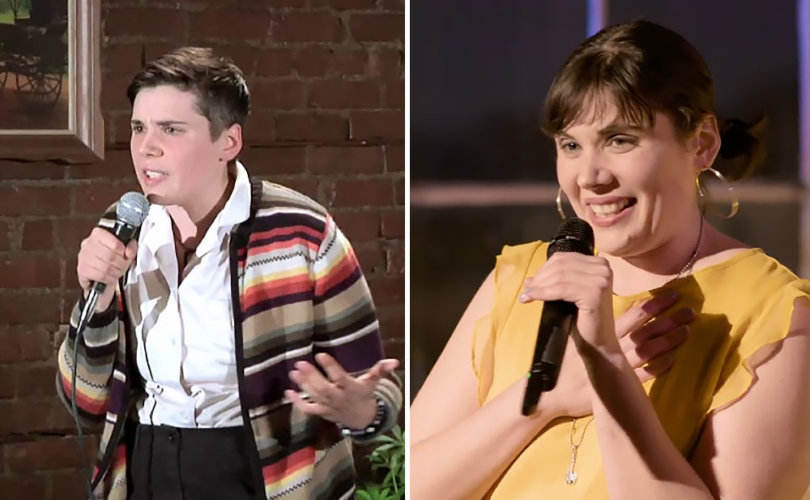 March 10, 2017 (Illinois Family Institute) — Progressives promote the lie that “gender identity” is immutable in order to rationalize and normalize an incoherent ideology and destructive medical “treatments.” Leftists desperately hope that the mainstream press, always in thrall to sexual radicalism, will avert its gaze from the growing “de-transitioning” movement. Thankfully, social media is here to occasionally shine light on alternative reality, that is to say, objective reality.

In an illuminating YouTube video, Carey Callahan, a young liberal woman, describes her “de-transition” from identifying as a “transman” and exposes some inconvenient truths about the “trans” community on which the mainstream press never reports:

I used to believe I was…a trans guy, and I stopped believing that….When I was trans…I felt that my trans identity should not be pathologized, that it was a healthy beautiful thing…that I was making these decisions from a clear state of mind….Looking back, I do not think I was in a clear state of mind, and I absolutely think that I was operating under some delusional ideas about what it would take to pass as a dude. The feelings that I had interpreted as gender dysphoria were actually long-term trauma symptoms that I had never addressed.

Every step of the process, every step I took in affirming that trans identity, life got worse….People in my little trans bubble were some of the most anxious people I’ve ever met…and coping with it in a real weird way. Lots of everyday drug use, eating disorders, compulsive working out…lots of over-the-top sex stuff, cutting, alcoholism….It was obvious that people…were not doing well.

Another de-transitioner, this one a young man who had been pretending to be a woman, explains his epiphany regarding his “transition”:

I felt like I was just doing something [i.e., “transitioning”] I didn’t need to do. I don’t feel that it 100% came from me. I don’t feel that organically, by myself, I would have done that. It was just something that the circumstances I was in, and the surroundings I was in, the influences I had…made me make these moves….At some point, I realized…I really didn’t want to do it. People told me that I would have less doubts and I would feel super confident and sure of myself as a female when I took the hormones, but honestly as soon as I got on them, I started questioning myself more and more.

A de-transitioner who calls herself “Crash” shares her convictions regarding the tragic reasons many women adopt a male identity:

Sometimes women take on a trans identity and transition due to trauma that we live through….I don’t think many people know this….I know a lot of other women who feel like their dysphoria or trans identity or transition…were a reaction to trauma. For those of us who transition, we didn’t go into our transitions…thinking that we’re reacting to trauma….We had dysphoria that we were trying to alleviate by changing our bodies….

Some women end up identifying as trans…because we lived through trauma that is in some way connected with us being women, with having a female body….A lot of us survive sexual violence. We were raped or survived some other kind of assault. A lot of us are child sexual abuse survivors. Some of us were attacked for being lesbians…My mom’s suicide played a huge role.

The Left says that “gender identity” is immutable and, therefore, even young children should be able to access medical help to refashion their bodies in such a way as to make them match the sex that corresponds to the cultural conventions these children prefer. In other words, young boys who “identify” as girls do so based on their desire to wear girls’ clothing, have long hair, and play with girls’ toys. But the Left says these are merely arbitrary, socially constructed norms. So, why change their bodies? Rather than rejecting their bodies, why not reject the norms they believe have no objective reality or meaning?

Of the many tragic consequences of this science-denying sexuality dogma is the fact that “transitioning” is harming people. Society is marching blindfolded into a brave new dystopian world whose victims are increasingly children who will one day tell their stories of regret—stories like that of de-transitioner, Cari Stella, who “transitioned socially at 15,” started taking testosterone at 17, had a double mastectomy at 20, de-transitioned at 22, and recently said this:

[De-transitioners] are not just statistics….We’re real people….I’m a real live 22-year-old woman with a scarred chest, a broken voice, and a five o’clock shadow.

Are castration, mastectomies, and chemically-induced sterility for young adults really the signposts on the path to the right side of history?

If physical embodiment has no intrinsic and profound meaning, why are gender-dysphoric persons spending so much money and enduring so much pain to change their bodies? If restroom and locker room usage is so inconsequential that women and men should be willing to share these private spaces with opposite-sex persons, why can’t gender-dysphoric persons share them with persons of their same sex?

Perhaps the extreme measures “trans”-cultists take in their disordered quest to mask their objective, immutable sex as revealed in physical embodiment testifies to the profound meaning and importance of physical embodiment as male and female—embodiment that “progressives” and transgressives are telling the rest of us to ignore.

This article was originally published on the website of the Illinois Family Institute and it re-published with permission of the author.

Bruce Jenner scolds Trump for transgender decision: ‘Call me’ to fix this ‘disaster.’