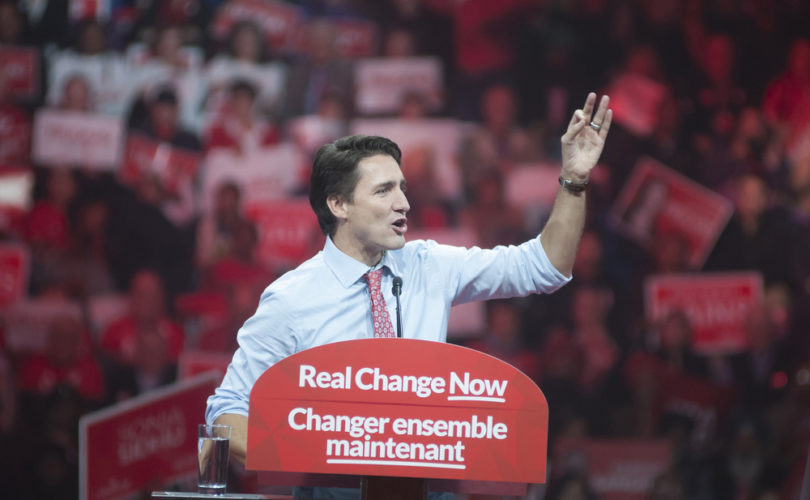 October 20, 2015 (UnmaskingChoice) — Many people are looking for some encouragement after the election last night of Justin Trudeau as Prime Minister of Canada. But for those who care about the moral fabric of our country, there’s not much to be had. In all likelihood, the next four years are going to bring many setbacks to the pro-life and pro-family movement in Canada, and hopefully the huge numbers of Canadians who didn’t show up to the polls, and even larger number of Canadians who have checked out of the culture wars, will realize what happens when we decline to fight for the country we believe in. In short: that country gets remade by those with radically different views. Here are just four things we can expect from Trudeau’s tenure:

1. It’s hard to make things worse when it comes to abortion in Canada—we haven’t had a law restricting abortion since 1988. But Justin Trudeau will certainly try. He’s already indicated that he would fund abortion overseas, and push to make sure abortion is more easily accessible in places like Prince Edward Island. Add to that the majority of Members of Parliament being either hardline pro-abortion or being forced to vote that way by Mr. Trudeau, and it won’t be an easy four years for the pro-life movement.

2. A Trudeau Administration will usher in the legality of euthanasia—with the Supreme Court of Canada having overturned our laws against it in the Carter Case, the House of Commons, now dominated by Trudeau’s Liberals, will have the chance to pass their own laws on euthanasia. The Liberal Party endorsed the decriminalization of euthanasia almost unanimously in 2014, only wanting some oversight of how doctors kill their patients. The motion was sponsored by Liberal delegate Wendy Robins, who has managed to create a version of the facts in which the Belgium euthanasia model—already being used by perfectly healthy people—is not a dangerous one. For the record, Belgium allows the euthanizing—read “killing”—of children, and there are already Belgian doctors pushing for the widespread acceptance of “involuntary euthanasia—read “killing of people who don’t want to be killed.” Canadian hospitals—especially with a rapidly aging population and a very strained and over-crowded healthcare system—are about to get very dangerous for the elderly and the vulnerable.

3. There is a very real danger that the brilliant legislation the Conservative Party passed against prostitution, based on the Nordic model of targeting pimps and johns, may get repealed by Justin Trudeau’s new Liberal majority. Legalized prostitution has been a disaster wherever it has become established, with the victimization of women and girls and the flourishing of organized crime and human trafficking always figuring prominently in the equation. In Amsterdam’s infamous Red Light District, for example, over 60% of sex workers report getting sexually assaulted, and even the brothels strenuously outfitted to avoid such events place panic buttons where the girls and women can immediately reach them. Amsterdam has been forced to shut down their prostitution district several times because they can’t control the organized crime that legal prostitution inevitably attracts. This could very well come to Canada—with a majority, nothing is stopping Justin Trudeau.

4. Trudeau will pull Canada out of the ongoing bombing mission against ISIS, as he’s been promising for months. It boggles the mind that a leader could look at the blood-soaked orgy of crucifixion, torture, rape, and murder going on in Iraq and conclude that Canadian forces should do nothing to stop them. Trudeau musters more outrage about the meaningless niqab debate than he does about the ISIS butchers. He won’t do anything to stop Christians and Yazidis in Iraq from filling body-bags, but he’ll support your right to wear one in Canada. And while Trudeau is fully confident in his ability to face Russian strongman Vladimir Putin, that idea literally made the audience at the Munk debates roar with laughter. Now, it seems, the joke is on us.

There are solutions to many of these problems, although they will be much more difficult under a Liberal government. The vast majority of Canadians, at the end of the day, have never been exposed to a pro-life perspective, or shown what the reality of abortion is. The vast majority of Canadians have been slowly-but-surely backing euthanasia for years, without any widespread attempt at educating them on the results of this. The case against legal prostitution is air-tight, but it will have to be made, again and again, by those who fight tirelessly against human trafficking. The Canadian people proved last night that we have an enormous amount of work to do. Today is a good time to start.

And let us not be weary in well doing: for in due season we shall reap, if we faint not.–Galatians 6:9