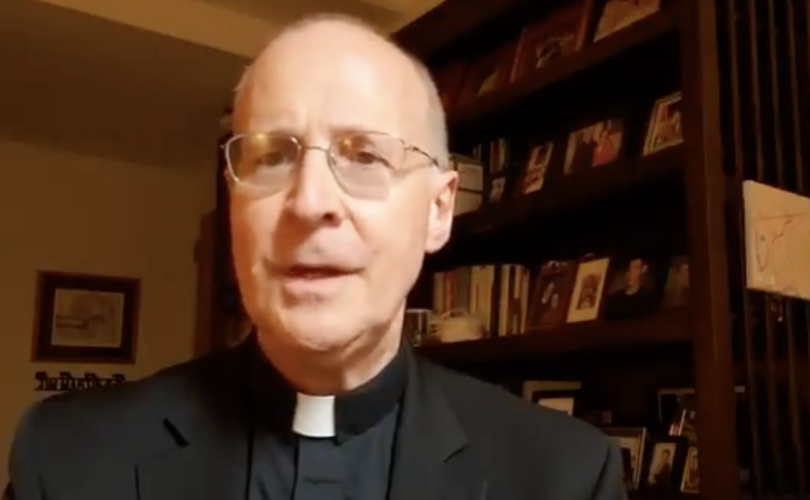 MADISON, Wisconsin, (LifeSiteNews) –  Father James Martin, S.J. has called a decision by the diocese of Madison not to host COVID-19 inoculation clinics for children “anti-life.”

The controversial celebrity priest made the comment in a tweet he published Thursday with a link to an article from the Wisconsin State Journal about the bishop’s decision.

Martin simply tweeted the words “Anti life” before providing a link to the article.

Martin’s comment comes only two weeks after he accused the U.S. bishops of ‘focusing too much on abortion’

The pro-LGBT priest, also a well-known supporter of the COVID-19 jabs, did not explain why he considers the decision to be ‘anti-life.’

This was not Martin’s first tweet on the issue. In July 2021, he posted a provocative and irreverent message, arguing that people who claim to be pro-life should get the vaccine.

Are you pro life? Do you reverence human life? Then get vaccinated for God’s sake. I mean that literally.

“Are you pro-life? Do you reverence human life? Then get vaccinated for God’s sake,” Martin tweeted.

It is now universally acknowledged that the current COVID jabs neither provide long-lasting immunity nor prevent the spread of the coronavirus. Their advocates now argue that they mitigate the severity of the disease, which is non-lethal in the vast majority of people, including unvaccinated people, who contract it.

In neither tweet did the priest address the fact that the COVID  vaccines were developed from or tested with cell lines derived from aborted babies, making their reception problematic for pro-life Catholics.

The diocese has since responded with their own statement, explaining their decision not to host COVID jab inoculation centers on diocesan premises. The diocese also  admonished Martin and the secular media for their rash and derogatory comments.

The diocese stated that the bishop’s decision was informed by his wish to remain neutral on the question of vaccination against COVID-19.

“This is not a decision that involves either an absolute moral imperative or an intrinsic moral evil,” it said in a statement published on Twitter last Friday.

“As such it should be made by individuals and parents with a well-formed conscience as to what is appropriate for their own circumstances, weighing carefully the medical and moral facts and the potential risks versus the hoped-for benefits.”

The diocese also issued a disclaimer, saying that the decision should not be interpreted as “condemning or discouraging vaccination,” and asserting instead that Bishop Hying has in fact encouraged vaccination in the past.

“Bishop Hying has given guidance on the moral dimensions of the vaccine, and he has even encouraged its reception, alongside his brother bishops in the state of Wisconsin. He has never discouraged reception of the vaccine,” said the statement.

The diocese described the bishop’s decision as an attempt to avoid “the appearance of unequivocal moral endorsement while also respecting individuals’ and parents’ ability to make a decision based on their legitimate weighing of the medical and moral concerns involved.”

In addition, the diocese stated that the decision was taken, in part, in view of the strong division among faithful Catholics surrounding the issue of COVID vaccination, as well as the fact that vaccination clinics are already available in sufficient number throughout the counties of the diocese.

“Apart from the moral and medical dimensions of this decision, the issue has become bitterly divisive,” it said.

“Since there are already ample vaccination sites within the eleven counties of the diocese, Bishop Hying has decided that it would be best for parishes and other diocesan entities not to host vaccine clinics.”

Fr. James Martin was then criticized for his tweet, which was described as “a case of rash judgment at best,” especially considering that he and other critics of the decision“did not have the decency to contact [the bishop] first.”

The response also included the full text of the original statement, which was partially quoted by the Wisconsin State Journal, and which sparked the “uncharitable posts,” including Martin’s.

Martin’s accusation that the diocese of Madison is “anti-life” comes only two weeks after an interview with Italian newspaper Corriere della Sera in which he suggested that the U.S. bishops focus too much attention on the social injustice of abortion.