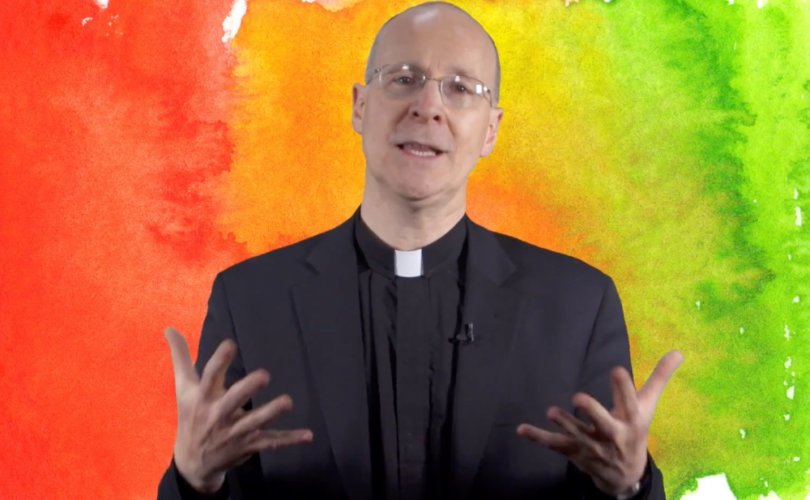 October 17, 2019 (LifeSiteNews) — Once again, Fr. James Martin has sounded off about his LGBTQ obsession. Does this man ever talk about anything else, for instance the Mass, prayer, Our Blessed Lady? If he does, then I seem never to be around at the time!

The topic this time is another of those overworked issues, namely the question of whether St. John Henry Newman was a homosexual, a gay icon no less. Needless to say, Fr. Martin is again just re-tweeting what he has said on many occasions. And, of course, this is part of an agenda supporting the promotion of homosexuality in the Church.

In addition, there seems to be never a word from him about the true nature of Catholic teaching on this matter. What makes it all so much more dangerous at this time is the fact that Fr. Martin has never been disciplined for the clearly deliberate ambiguity of his statements and was even granted an audience by Pope Francis in September with no clarifying statement being released afterward.

At the center of this whole matter is Newman’s relationship with his great friend, and fellow Oratorian, Fr. Ambrose St. John, in whose grave Newman was buried. This matter was first brought to general attention by John Cornwell in his book Newman’s Unquiet Grave (2009). This is in truth a scurrilous work full of errors and clearly malicious in intent. Thankfully, the whole issue of the burial is dealt with by Fr. Ian Ker in an afterword to the recent (2009) reprint of his John Henry Newman: A Biography (pp.746-750). This book is of course recognized as the definitive account of Newman’s life.

Fr. Ker lays the essential groundwork for the truth by saying this:

In an age that has almost lost the concept of affectionate friendship untouched by sexual attraction, such speculation (that there might have been some kind of homosexual relationship between the two friends) was no doubt inevitable.

Then, Fr. Ker goes on to make the following vital points:

Fr. Ker concludes that the Oratory and the Church authorities would never have permitted such a joint burial if they had had the slightest suspicion about what must have seemed to them a totally innocent, not to say praiseworthy gesture.

Newman had plenty of critics, not to say enemies, in his time; yet not one of them, not one newspaper, not one casual observer ever dreamed of reading a significance into an act of loving friendship, and indeed of humility, such as was left to the 20th century to read into it.

In conclusion, then, this is not a time for tawdry falsehood, but one for rejoicing by all faithful Catholics, and the use by them of intercessory prayer to a great new saint of the universal Church.

John Beaumont is a legal consultant and freelance writer on Catholic issues. He is the author of Roads to Rome; A Guide to Notable Converts from Britain and Ireland from the Reformation to the Present Day (2010, St. Augustine’s Press); and The Mississippi Flows Into the Tiber: A Guide to Notable American  Converts to the Catholic Church (2014) published by Fidelity Press.