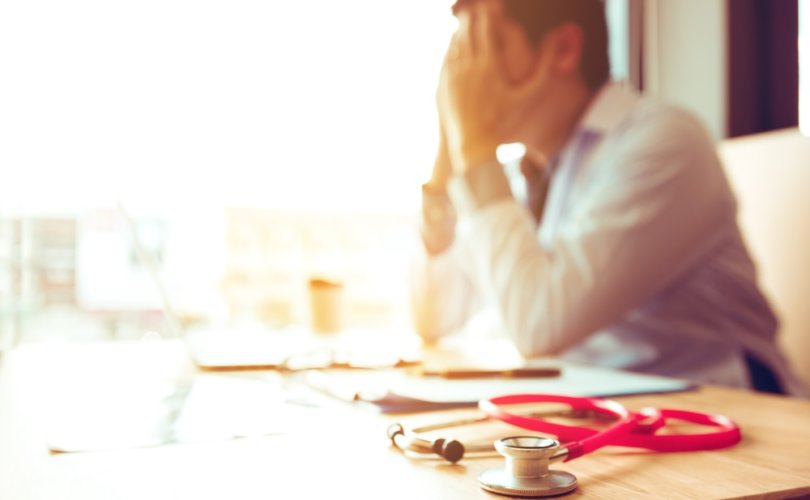 NAPLES, Florida (LifeSiteNews) —I recently took part in what’s called a “White Mass.” That’s a liturgy aimed at asking God for special blessings on those involved in the medical profession.

It was quite a moving experience. All those present, wearing their white coats and stethoscopes, put me in mind of hospital calls I’ve made on the sick and dying.

There’s been an abundance of such visits over the last year and a half, as COVID has laid low so many people. And I’ve always been impressed by how doctors and nurses are able to go about their healing and comforting activities in the face of sickness, suffering, and death.

Medical professionals have been called heroes, and rightly so, carrying out such vital functions often at great personal risk. Many have been infected, especially in the early days of the pandemic, when there was uncertainty about the paths through which the disease was transmitted.

During the past few months, “following the science” (as we’re advised to do), we’ve gained a clearer understanding of the actual dangers — and the limits — of this coronavirus infection. We’ve learned, for instance, that those at greatest risk are people who have co-morbidities. Those are complicating factors such as other chronic diseases or debilitating physical conditions. One of the most common is obesity.

“Following the science” has also brought us to an ironic situation where we’re under extreme pressure to accept vaccines whose effectiveness is highly questionable, and for which evidence is accumulating that they can be harmful.

This is unprecedented. In the past, when some new vaccine or medication was seen to cause harm, it would be pulled from the market immediately.

Yet, federal, state, and local officials are threatening us with mandates and vaccine passports. People are losing their jobs for refusing to accept the dubious “jab.”

Among those who are most hesitant about the vaccines — and most vocal in their skepticism — are medical professionals themselves. Numerous doctors are sacrificing hospital privileges over their refusals to be inoculated. Nurses are quitting their staff positions. We face an actual healthcare crisis because of it.

Many of these folks have gone on record with public statements, social media posts, and online videos warning about the vaccines. They’re making their case with frightening accounts of negative reactions, including heart damage, blood clotting, loss of physical capacities, and deaths, even among the young and otherwise healthy.

Suddenly, those who recently were hailed as heroes find themselves criticized and shunned, even mocked and belittled, by health agencies, hospitals, government officials, and the news media.

Perhaps worst of all, the general public — we who so often find ourselves as patients dependent on medical expertise — have been thrown into a state of utter confusion. The credibility of the entire healthcare profession has been seriously undermined.

Whose advice are we to trust when there’s a multiplicity of conflicting claims and theories, when the recommendations and guidelines and official pronouncements of our purported authorities keep changing from day to day?

To whom can we turn when we need help and healing?

Of course, medicine isn’t the only profession disrupted by the push for vaccinations. Other industries are facing similar stresses, the most visible being the airlines, where pilots and other operational personnel are walking off their jobs in protest of mandates. The complex system of domestic and international travel is rapidly turning into chaos.

— Article continues below Petition —
PETITION: Urge "Catholic" Terry McAuliffe to renounce his promotion of abortion
Show Petition Text
1722 have signed the petition.
Let's get to 2500!
Thank you for signing this petition!
Add your signature:
Show Petition Text

And that chaos is spreading throughout the entire economy. Companies — especially small businesses — are being coerced into antagonizing their customers. They’re asking intrusive questions about whether people are vaccinated, imposing mask requirements, turning people away (this on top of the inflation, business closings, unemployment, and product shortages that are shaking the economy).

Likewise, teachers are being pushed out of schools that have struggled with closings, lost students, and were forced to provide instruction online. The military is being decimated, worsening our national security situation at a time when the disastrous Afghanistan withdrawal has weakened our alliances, and the Chinese have just tested their new hypersonic missile.

We’re seeing a profoundly negative effect on the social and moral fabric of our country, on our sense of community, driving wedges between people, alienating friends and family members. Indeed, over the long run, this social damage may prove to be far greater than that of the disease itself.

It’s hard to imagine that such multi-faceted disorder is an unforeseen consequence of good intentions. To the contrary, it all feels highly contrived. It could very well be intentional — an element in some plan of those who seek to weaken our nation and diminish American influence in the world.

And you can be sure there are plenty of such people who are willing to do the devil’s work, who won’t “let a crisis go to waste,” as it’s been said. In fact, Satan is having a field day right now. The divisions being created among us are very much a reflection of his traditional strategy of “divide and conquer.”

Make no mistake, this virus is real. It’s brought genuine tragedy. Colin Powell is only the latest high-profile example of the many folks who’ve died of Covid and its complications. I’ve known plenty of others.

Though I have received the vaccine myself, I take no personal position on its efficacy or safety. I’m not a doctor or a scientist, so the feelings I express are based only on what I hear and read. I can’t offer definitive proof of my own, one way or the other.

It does seem to me, however, that this pandemic is being exploited to achieve objectives that have very little to do with protecting public health — and much more to do with socialist-inspired ideological dreams.

Doctors, nurses, and others who are resisting the mad vaccine rush are doing an inestimable service in raising critical questions at this critical time. They’re forcing us to take a closer look at an increasingly desperate situation.

Once again they are proving themselves to be real heroes.

This essay is based on a homily delivered by Fr. Orsi.  A priest of the Diocese of Camden, New Jersey, Rev. Michael P. Orsi currently serves as parochial vicar at St. Agnes Parish in Naples, Florida. He is host of “Action for Life TV,” a weekly cable television series devoted to pro-life issues, and his writings appear in numerous publications and online journals. His TV show episodes can be viewed online at: https://www.youtube.com/channel/UCyFbaLqUwPi08aHtlIR9R0g