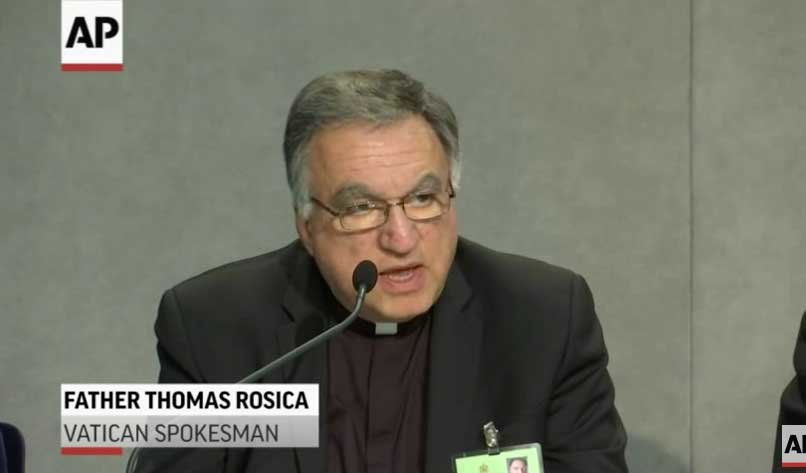 March 18, 2019 (LifeSiteNews) – I must admit to being conflicted about the continuing life of the plagiarism story around Fr. Rosica. In Lent, we should be directing our minds and hearts to other things. A proper and sufficient response would seem to be prayer and charity, leaving it to Fr. Rosica’s religious congregation, the Basilian Fathers, to see to his rehabilitation.

But this is where things get more complicated. The Basilians also enabled and oversaw Fr. Rosica’s increasingly important public roles in academia and the media. For example, his appointment to and removal from the board of the University of St. Michael’s College seemed to be almost entirely in Basilian hands. The two figures who ultimately spoke, albeit briefly, to the plagiarism issue—the Chair of the board and the Superior General—are both fellow Basilians.  In my view, neither statement adequately addressed Fr. Rosica’s public as opposed to his priestly responsibilities. We were not offered the full public accounting and clear sense of necessary next steps that would normally form the basis of such a serious disclosure at an institution that receives public funds.

This shortcoming is particularly problematic because Fr. Rosica has yet to fully and adequately acknowledge his plagiarism, accounts of which continue to grow as they are found to stretch back farther in time. His failure to meet the standard of accountability required in his academic and media roles means that this duty must fall to someone else, ultimately to the Basilians. Their failure to address this squarely, without a complete accounting for his grave mistakes, and a commitment to corrective action, leaves them open to the charge of negligence.

This is particularly acute in those cases where Fr. Rosica was given a governance role in universities founded by the Basilians, and is part of a larger question about just what kind of relationship the Basilians continue to have with these institutions. I was increasingly concerned about confusion around this larger topic when I served as president of the University of St. Michael’s College. On my arrival, I had somewhat naively assumed that the any remaining Basilian role—the Superior General approves the presidential candidate recommended by the board, and appoints a small number of board members—was largely symbolic, with its residual power reserved for rare instances of grave emergency. I became troubled as I began to see examples of that power being exercised in ways that were never openly discussed at board level.

One of my last acts as President was to bring in a respected and disinterested expert to provide advice on how we might better prepare ourselves for an upcoming inspection of our faculty of Theology by the agency that provides such faculties with  accreditation. The faculty had been operating under a less than complete bill of health from the accrediting agency for some time. It was shedding students and losing money, largely due to the kind of enforced ideological rigidity that is killing similar faculties across the continent. I wanted the University, rather than the faculty, to take responsibility for these problems, and to own and benefit from the agency’s recommendations for change. In his report, the expert pointed to persistent confusion about the role of the Basilians in board governance as the most pressing problem facing the university, and the main reason we had so consistently failed to address the problems in the faculty. In the end, his opinion didn’t really matter, because the accreditation visit was quietly rescheduled, without my knowledge or approval, to a time long after my departure.

Two things are worth noting. First, I ultimately discovered that the postponement had been discussed with, and I have to assume approved by, the Basilian who served as the board Chair. Second, the then-Superior General had already launched an alternative strategy for the faculty, one that Fr. Rosica actively championed as a board member. What worried me most was that this intervention into the management of the University was presented as something of a fait accompli, a Basilian “prerogative,” that trumped the authority of the board.

I came to believe that all too often at the University we were supporting Theology from the 1960s with board governance from the 1950s.

Perhaps there is an Easter connection to the Fr. Rosica story. As depressing as the saga is, it also offers an opportunity for renewal. The Basilians now have the opportunity to show their abiding love and concern for the institutions they created by finally agreeing to hand over full responsibility for governance to qualified and competent lay people. These would be individuals whose sole focus is to promote the good of a vibrant, open, confident and truly Catholic university. Meanwhile, the Basilians should also take responsibility for a full accounting for any mistakes Fr. Rosica has made in his public roles, exonerate his interns and junior staff, and provide assurance that he will not be allowed to accept any future public roles unless and until his plagiarism has been fully, adequately and transparently addressed.

The healing has a public as well as a priestly dimension.