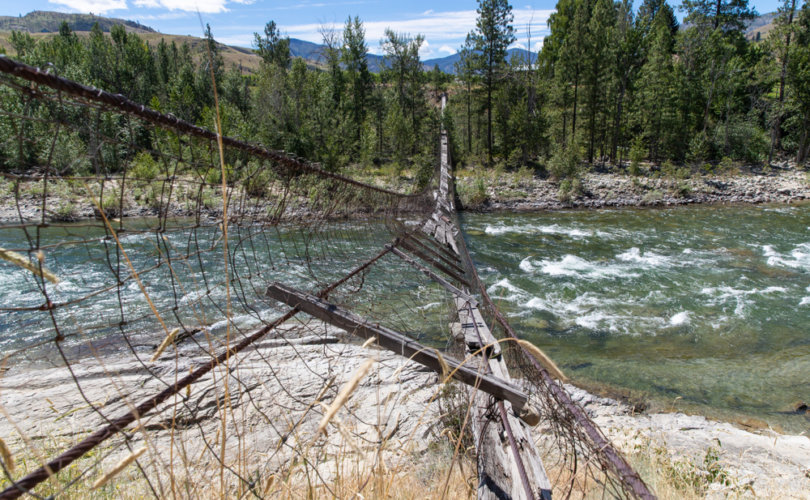 November 13, 2018 (LifeSiteNews) – I like bridges: from the large, majestic bridges that stretch far across the water, to the simple, yet ingenious Lego bridges my children have built. Both represent boundless freedom, ingenuity and a connection to something we yearn for.  Bridges can also mean destruction: from natural disasters to human engineering error, the result of a collapsed bridge brings fear, anger, and death.

Last month in Atlanta (Oct. 21), I attended a talk at the Shrine of the Immaculate Conception given by Jesuit priest Father James Martin.  He wrote a book about bridges titled, “Building a Bridge, How the Catholic Church and the LGBT Community Can Enter into a Relationship of Respect, Compassion and Sensitivity.”

I have never read his book, but I thought this would be an opportunity to learn more about him.  I hoped to get a sense of how he goes about building his bridge.

Prior to the talk, a small group of Catholics had gathered across the street to say a rosary.  I joined in the rosary and had an opportunity to speak to a few of those who stood in the chilly forty-degree fall weather.   I found this group to be open, honest and reverent in their devotion to Mary and the rosary.  In addition to signs which stated Magisterial teaching on marriage and questioning of Father Martin’s bridge-building approach, they brought a beautiful statue of Mary, crowned with flowers.  Their prayers, that they offered for those who gathered inside the Shrine, were sincere, quiet, and pious.

As I continued the rosary with the small group, I looked across the street towards the Shrine and quickly noticed two things. One was a sign on the Shrine wall which announced that migrants and refugees were welcome.  The other was a group of about six armed policemen.  Now, I don’t normally go to the Shrine at 8:30 on a Sunday morning, so it is possible that the church has a group of armed policemen on the corner each week. However, wouldn’t that make it difficult for the migrants and refugees to feel welcome, as the sign that the police officers were positioned next to proclaimed?

I quickly surmised that the police were there to ensure order on account of the small, rosary praying group with the Mary statue across the street.  I thought to myself, do the police and the Catholic leaders of the Shrine of the Immaculate Conception actually think that the small, rosary praying, Mary statue group would do anything to cause chaos at Mary’s Shrine? Could the bridge builders sitting inside the Shrine, who advertise respect, compassion and sensitivity be so callous towards the rosary devotees sitting out in the cold?

The time approached to hear Fr. Martin speak. The small rosary group wished me well as I crossed the street into the Shrine.

I have to admit, it was a bit unsettling to pass by the armed police going into a Catholic church. It did not feel welcoming as the migrant and refugee banner now above my head proclaimed. As I approached the Shrine steps, I noticed a man standing inside the Shrine door.  There were a few people in front of me at the top of the stairs.  The man quickly opened and closed the door as they entered.  Again, I don’t normally come to this church, but I have never seen someone stand by my parish door and open it and close it so quickly.  It certainly did not feel welcoming, but rather I felt a little fearful as I approached the door.  Would they let me in?  As a person who just left the rosary praying group across the street, would they tell me I was not welcomed?  Thankfully, the man let me in.  I thanked him for holding the door for me, especially on such a cold fall morning.  He gave me a smile and agreed with the weather.

The Shrine was crowded.  Morning Mass was ending, so many stood at the back by the doors waiting to hear Father Martin speak.  I talked with a few people around me.  All were cordial. I settled in a pew to hear the famed bridge builder.

He first said a prayer for the protection of Mary (which made me think of the small rosary praying group across the street) and then announced that the talk he was about to give was approved by the Vatican.  This drew large applause.

He began his talk by speaking about how the LGBT community has felt excluded from the Catholic church for so long.  In fact, a few times in his talk, he emphatically declared that they have been “treated like dirt” both from Catholic laity and Catholic pastors.

Again, my mind settled on those outside the church, maybe 100 yards away, who prayed for Fr. Martin and everyone in the Church who was hearing this message.  The initial message of Father Martin was that LGBT persons had endured years of persecution and rejection from the Church. I thought to myself, “he sure is starting his bridge out on some inflammatory and accusatory soil, but let’s see how his structure comes together.”

He continued his talk, some of which most faithful Catholics would agree with: all are welcome to the Catholic Church, we should all be involved, and that God loves us — really basic things my children understood by the age of five.

The one glaring absence I did notice in his message was the call to repentance. Again, something my children learned very early on.

Martin proceeded to say that 90% of “homophobia” against LGBT people would disappear if the church listened to these people.

He then referred to the small, rosary-praying, Mary-statue group outside in the cold as an example of this “homophobia.”

At this point, his bridge developed a dangerous engineering flaw for me.

Did Martin dialogue (which is a word Martin so often uses) with this group standing outside in the cold? I was there when the group formed early in the morning.  I never once saw Martin walk across the street and — using another favorite term of his — be in “conversation” with them.  Where did his insight on their thinking come from?

He continued to give examples of how to make LBGT persons full members in a parish.

He then came to the point of chastity.

Martin did acknowledge that all in the Catholic Church are called to chastity, but then he cautioned the listeners not to reduce LGBT persons to the call of chastity.

With a humorous tone, he suggested all attending to talk to their straight friends about chastity and see how that goes over.  He then declared that we have no idea of the sexual lives of others and that LGBT persons are not the only ones who are falling short.

“Everyone is not living up to the gospels,” he said.

Laughs erupted in the church.

At that moment, Martin’s bridge completely collapsed for me.

It wasn’t the acknowledgment of failing to live up to the gospels that collapsed the bridge for me.

It was his solution.

It was as if he was telling the crowd, 'We can’t live up to the Gospels of Jesus, so let’s redesign how we define the expectations of the Gospels.'

The words that his talk was “Vatican approved” rang in my ears.

I thought: “Is this really the bridge that the Vatican approves of?  The bridge of gospel-less expectations? If so, this is what we in the Church are facing — collapsing bridges designed by erroneous human engineering.”

Whether this erroneous design is by accident or purpose we can continue to debate, nevertheless, it is a humanly flawed bridge-structure that will collapse.

I pretty much agree with Martin that, “everyone is not living up to the gospels.” However, I have had the honor of meeting or reading about some truly saintly individuals who live their lives according to the Gospel. Excluding this group, yes, the rest of us fail miserably.  However, I don’t want to fail.

I want someone to design me a rigid, majestic bridge that gets me and my family home — to Heaven.  I want to trust that this bridge will safely take us to our destination, despite the changeable weather conditions around us.  It won’t crumble underneath our feet. It will not fail us.  My family and I stay with the Catholic Church because it has provided this sound bridge for over 2,000 years.  Its design is stable, flawless and everlasting.  The perfect bridge!

Father Martin is a bridge engineer that seems determined to build his bridge on unsound footings of divisiveness, labeling, and descending expectations of human actions.  Its design is human in nature, not supernatural in order.

At one point in his talk, he mentioned that there is “no other with Jesus, just us with Jesus.” While the words he said were true, his actions on that Sunday did not hold up to those standards. How could he say that after calling the small, rosary-praying, Mary-statue group outside “homophobic”?  Aren’t they part of the “us”? I know for certain Jesus would think so.  He would have met them out in the cold. He would have dialogued and conversed with them.

If Martin truly believes in bridge building, why didn’t he start with a simple, possibly unnoticed bridge that would have spanned across the street in Atlanta to the small group of rosary-praying, Mary-statue Catholics out in the cold, who stood there all morning and prayed for him and all those who sat inside the church?  Instead of building that necessary bridge, he chose to stand at the altar of the Shrine of the Immaculate Conception and called those individuals across the street who prayed to Mary “homophobic.” And this, coming from someone who started out his own talk praying to Mary.  I can’t speak for Mary, but as a mother I would have certainly been disappointed that all of my children could not have prayed together, but instead, one chose to name-call the others.  This certainly would have brought just punishment to my children.  Mary might be thinking the same thing.

Father James Martin is not a bridge engineer I will place my confidence in. Sunday confirmed that for me.  His bridge is not a bridge that connects, but rather seems designed to generate divisiveness and ultimately schism.  In structural terms it is unsound.  During his talk, I became increasingly aware of the dangers of unsound bridges.  They do bring fear, anger, and death.

I hope you will all join me and the small group of rosary-praying, Mary-statue Catholics and unceasingly pray for the safety of all those who have chosen to trust Fr. Martin and step across his dangerous bridge.