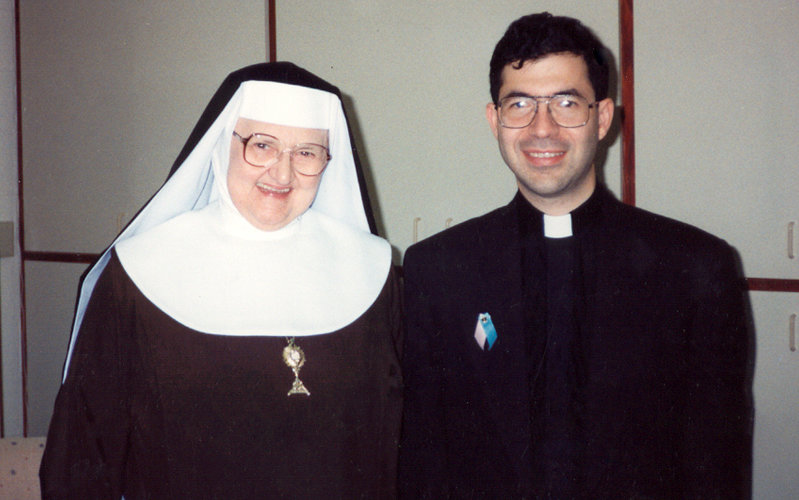 Note: Fr. Frank Pavone is the founder of Priests for Life.

March 28, 2016 (LifeSiteNews) – I was privileged to have many encounters and conversations with Mother Angelica over the last 21 years.

One of my first meetings with her, and one that greatly advanced my own apostolate of Priests for Life was when in 1994, after she had interviewed me on her live show the previous evening, she sat with me in her office and we discussed the abortion issue in the church and in the world. I explained to her that the work that I had undertaken on a full-time basis came about not from Cardinal O'Connor approaching me, but from me approaching him with the conviction of conscience that I could not continue on with my life business as usual without devoting myself full-time to protecting the unborn. He gave me his permission to do this in 1993. Mother Angelica gave me tremendous encouragement in following this call of conscience and letting nothing deter me from it.

Then she told me in that meeting that she wanted me to do a series for the network about abortion and the pro-life movement. That very moment, she picked up the telephone and called one of her producers and asked them to schedule a taping of a series with me. Within months, the series was taped and began airing in January 1995. Because of the reach of EWTN and because of the fact that every year since then we have taped new episodes for this series, Defending Life is the longest running, farthest reaching television program about abortion ever created. And it has grown our apostolate immensely.

On another occasion, when she was getting ready to have the Shrine built in Hanceville, she shared with me privately how the presence of the statue of the child Jesus in the center of the plaza represented her desire to make this a place where those who have had abortions can find healing, and a place where the dignity of the child, so under attack by abortion around the world, would be lifted up at all times at that Shrine.

On another occasion, I asked her, “Mother Angelica, how does one do great things for the Lord?” Her answer has been a guiding light for me ever since. She told me that the secret is to walk through the doors of opportunity that you have today, with courage, while you do not know how the plan will unfold tomorrow or the next day. She said that too many people will not take the first step unless they have a five or 10 year plan, and that this is a mistaken desire to have too much control and certainty. We have to trust in the Lord and do good today while we have the opportunity. Once we go through an open door, then God will show us what the next door is.

I had many opportunities to be on the Live Show with Mother, and even to guest host it for her a couple of times. One of the most memorable times was when I was on the show just with her and another mentor of mine, Fr Benedict Groeschel. And one of the things I always took away from being on these live shows was how Mother would interact with the studio audience before the show started. She would want to greet each and every person, hear about where they were from, laugh and joke with them and encourage them, and she would do this practically right up until the very moment when the cameras went on live. The rest of us would be sitting in our chairs on the set, and the studio crew would be trying to get Mother into her chair so that they could put the microphone on her and get everything ready to go live. But she wanted to greet each person, and meanwhile we heard the crew announce, “two minutes,” and then “one minute,” and there Mother would be greeting each person as if she had all the time in the world. Then, maybe at 30 seconds, she would say with a laugh, “Well, I guess I better get seated.”

And there was a lesson in all this. It was that when the cameras went on, she was not doing anything different than she had just been doing when the cameras were off. She was greeting people, listening to them, connecting with them, encouraging them, engaging them, and just wanting to bolster them in their faith. The transition from off-camera to on camera and then off again was seamless. She was always attentive to the person in front of her and to Jesus in that person and always interacting with them in the spirit of affirming truth, grace, and the freedom of the children of God.

Finally, Mother Angelica taught me how to be faithful to the church even when encountering opposition from within. She and her apostolate certainly have had that experience, and so have I and my apostolate. Through many confidential conversations, she taught me to trust that the church is always bigger than any particular person or institution within it, and that there is always a way to work out family squabbles without leaving the family. At the same time, she taught me that at the judgment, we are not going to have to answer for the insight, courage, understanding, vision, or lack thereof on the part of anybody else in the church, including bishops, but only for what we did with the insight, courage, understanding, and vision that the Lord gave personally to us. Every vocation is intensely personal and individual, and it is in fulfilling that vocation that we find happiness, holiness, and salvation.

In these latter years of her life, I have been privileged multiple times to offer Mass in her room, where she is unable to speak and unable to get out of bed. Yet when she is not sleeping, she is fully alert, recognizing and communicating with those around her, with her eyes and facial expressions. I see the same peace, joy, and love that I saw at any time when she was in the fullness of her activities. I obtained for her recently a first class relic, some of the blood of Pope Saint John Paul II, and one of the most moving moments was when I said Mass in her room with the relic present. I reflected during that mass that there I was in the presence of the Eucharistic Lord, the blood of a canonized saint, and the person of a living saint!