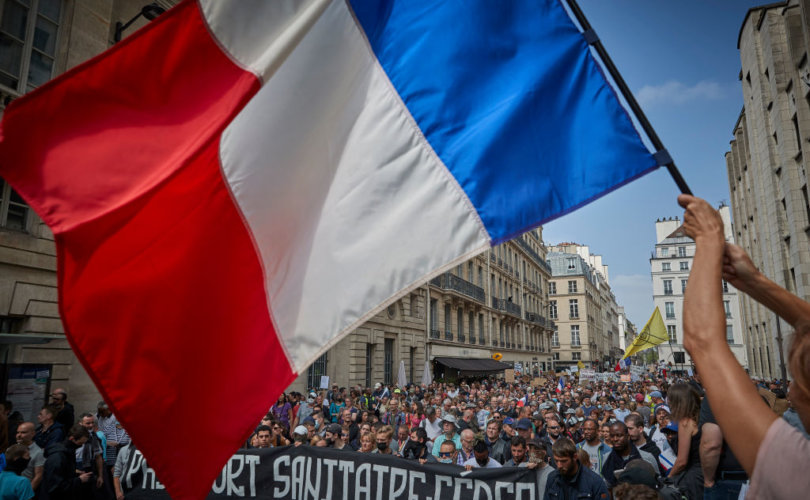 (LifeSiteNews) — An “unprecedented wave” of COVID-19 has hit two French Antilles islands, Guadeloupe and Martinique, and they are being showcased by the government and the media as perfect counter-examples of the way the sanitary crisis should be handled. Why are there so many SARS-CoV-2 infections and also an unprecedented number of “COVID deaths?” Because – the official narrative goes – so many inhabitants of the two French “Overseas Departments” are unvaccinated. Indeed, only 20 percent have received “full vaccination,” as a large part of the Black population appears to be obstinately resisting the jab.

But many dissident voices are being raised over the official interpretation of the crisis while its handling by the authorities could turn out to be a catastrophe itself: COVID treatments such as Ivermectin have been impounded, according to many sources, and are no longer available to doctors who actually want to help their patients and not send them home with paracetamol.

In a recent televised speech, French president Emmanuel Macron stated that the situation in the Antilles offered a “cruel demonstration” of the view that “vaccination” was the only way out of the catastrophe. Both islands were forced into lockdown earlier this month. At present, the number of daily infections is reported to have reached 2,200 per 100,000 inhabitants in Guadeloupe while in Martinique a downward trend appears to have set in since last week with an average of 1,147 “cases” per day.

Macron’s comments, based on the comparison with mainland France, did not consider the fact that the Antilles are in a completely different part of the world. Why not compare with Egypt, where deaths have dramatically decreased since mid-May, and the total vaccine “coverage” of the population is just over 2 percent?

In the French Antilles, COVID restrictions, which include shop closures, curfews and a 5 km limit on the distance inhabitants can travel from their homes, have not to date obtained a significant reduction of daily hospital admissions, ICU treatments, or deaths, confirming once again that confinements aren’t stopping the epidemic.

— Article continues below Petition —
PETITION: No to mandatory vaccination for the coronavirus
Show Petition Text
1082129 have signed the petition.
Let's get to 1100000!
Thank you for signing this petition!
Add your signature:
Show Petition Text

Even worse: while a sanitary “state of emergency” was decreed on July 14 in Martinique and on July 28 in Guadeloupe, the French authorities from the “Métropole” – mainland France thousands of miles away – did nothing to ensure the delivery of drugs (other than the experimental “vaccine”) or oxygen, and no extra hospital beds were set up.

As a result, hospitals in Guadeloupe and Martinique are facing a high influx of patients, with about 60 patients in ICU beds in both islands. Martinique has had an average of 7 daily deaths attributed to COVID over the last week and Guadeloupe, 8.

Some 300 health workers have been flown in from the “Métropole” in recent days, and some patients in critical condition were transported to mainland France to relieve the pressure – although many say these dramatic measures are mainly a public relations effort aimed at getting more of the islanders to get the experimental Spike protein jab.

In fact, one commentator posted a film on Twitter underscoring that, contrary to news about “overflowing morgues,” hospitals in Martinique would cope if they could give treatment.

“There are no dead all over the streets. We have all the health carers that we need. The reinforcements that were sent are the result of political decisions: they have sent vaccinated personnel from the Métropole without any equipment although we are supposed to lack oxygen and drugs,” said the author of the video, who presents herself as the member of a group fighting for freedom of expression of the truth.

She added that many natives of Martinique working in mainland France had volunteered to come and help, but all had been turned down in favor of “vaccinated” health workers.

“The objective is to replace the local workers who are reluctant to get the shot by vaccinated people native to the Métropole,” she wrote.

According to this whistle-blower, all the Ivermectin tablets in stock on the island were requisitioned by the “Gendarmerie” about two weeks ago and placed under lock and key in the university hospital of Fort-de-France, in order to prevent people from getting early treatment.

Locals also maintain that a number of the “COVID” patients in the ICUs of the French Antilles are in fact dengue cases, as a contact who has recently returned from Guadeloupe confirmed to me, adding that the situation is not as bad as the media are making out.

Conspiracy theory? If so, it is widely shared. One Martinique deputy to the French National Assembly, Jean-Philippe Nilor, posted a video on August 18 in which he asked with anguish in his voice why Martinique and Guadeloupe are currently out of stock of Ivermectin.

“Why?” he repeated angrily.“Instead of restocking our pharmacies with Ivermectin and other alternative therapies, they are sending us the military, who aren’t vaccinated… even though the official narrative is that we have so many ill patients because there are so many unvaccinated people here.”

“This is the height of incoherence,” Nilor added.

He noted that the government had announced that “monoclonar antibodies” will be tested in the islands as a treatment for COVID.

“That means only one thing; that there is an alternative to vaccination. That’s exactly what we have been saying and defending,” Nilor said.

“I’m not against vaccination, there are people around me who did get the shot. Others didn’t. But I’ve said it and I take full responsibility for it, and I’m going to repeat it: I’m against forced injections, I’m against the injunction for injections. Is this making me responsible for everything that’s happening right now?”

Reports from the islands in the mainstream media are ever more dramatic; the latest announced that hospitals are already being forced to “choose” between patients admitted to intensive care, sending away all those over 50.

But a local doctor, Françoise Douady, suggested to a local TV station that the epidemic of serious cases could have been avoided.

“Not once were general practitioners asked to give treatment,” Douady said.

“On the contrary, they were told not to treat, and people were told to stay at home and take paracetamol. Why is there a bottleneck right now in the hospitals? Because patients are arriving when they are already deteriorating.”

She is one of a dozen doctors who treat their patients who have COVID, and she complained about the present difficulty of not being able to get oxygen and “certain treatments that work such as Ivermectin, whatever they say about it.” She also quoted hydroxychloroquine and azithromycin as prescribed by Dr. Didier Raoult in France.

The local council of the “Ordre des Médecins” (France’ official professional governing body of medical doctors that can revoke practicing licenses) in Martinique decided on Thursday to sanction all doctors who publicly express an “anti-vaccine” opinion.

If the situation is being used in the French Antilles to get more people to get the experimental jab, its exploitation is in fact more far-reaching. Daily death counts in France aggregate deaths attributed to COVID from all the French territories, be they in continental France or in the sub-tropical French Antilles and Pacific Islands. At present, deaths in the Antilles – where 1 percent of the total French population lives – account for 30 percent of the daily count of “COVID deaths,” but it is the total number of “cases” and deaths that is being used to impose the dictatorial sanitary pass and all-but-compulsory vaccination in all the French territories.

At present, while testing is on the rise because unvaccinated people need proof of COVID negativity for many ordinary acts of life, such as access to fast trains, restaurants, non-urgent hospital care, and visits to family members in hospitals and hospices, the proportion of positive tests is continuing to fall, having now reached 3.4 percent.

The number of positive tests has been stable at about 25,000 per day since the beginning of August. Jean-François Delfraissy, president of France’s “Scientific Council,” an unelected body that has guided Macron’s COVID policy from the start, stated on July 23rd that infections would reach 50,000 per day by the beginning of August, and that pressure would increase on French hospitals through this month. This has yet to occur.

The founder of “COVID Tracker,” 25-year-old computer engineer Guillaume Rozier, widely quoted as an expert in COVID statistics and projections by the mainstream press, was even more pessimistic: he said that by August 15 there might be 143,000 new cases each day in France.