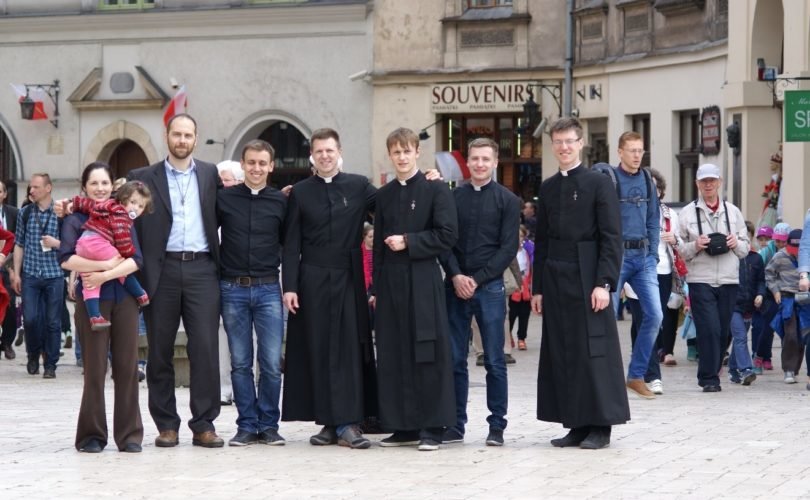 August 6, 2015 (LifeSiteNews) — Krakow. It was a brilliant spring day in May. I had just emerged from St. Mary's Church, located on the North-East corner of Krakow’s famous main market square. I had flown to Europe mainly to attend a series of pro-life meetings preceding the Rome March for Life, and had decided to swing through Poland to meet with family members (my wife is Polish) and with pro-life groups there. Earlier that day I had met with pro-life great Antoni Zieba (from the Polish Association for the Protection of Human Life) in his offices and had planned to take the afternoon off to see the sights.

St. Mary’s Basilica in Krakow is only one of the scores of amazing churches dotting the land in Poland. Kneeling quietly inside the ancient church, I prayed for graces for myself, my family and our pro-life efforts in Quebec, all the while admiring the splendour of the surrounding art and architecture. The latter got me to thinking about how much Poland has yet to offer the world. It is, after all, one of the few, if not the only Western nation which, while previously having liberal abortion laws, went on to make abortion illegal in most cases (that in 1993, shortly after the fall of the Berlin Wall).

Emerging from St. Mary’s with these thoughts, and blinking at the sunlight as my eyes attempted to adjust to the brightness of the busy market square, I thought I saw an apparition: There in the midst of the street vendors and the horse drawn hansom cabs, there stood a string of young men in their twenties, all in a row, wearing… cassocks.

Cassocks! I fumbled toward them like a dehydrated man lunging after a mirage, but this was no mirage. Their somewhat apprehensive faces confirmed that these were indeed real men who really found my adulation a bit creepy. But my reaction, I still believe, was justified: I come from Quebec, Canada— a land where seeing a 20-year-old man in a cassock walking the streets in public is tantamount to seeing a rock float upwards. A land where this writer, who is 40, has, in Church circles, yet to escape the classification of “youthful”… It was therefore amazing to see these truly young men, with their downy cheeks and glowing skin, putting down their lives for Christ and making it known publicly in their dress.

“God bless you” I blurted out in English. “I’m from Canada, I work in Pro-Life… and where I’m from we don’t see the likes of you very often! What order are you?” The one whom I identified as a type of leader among them (whose name, I was later to learn, was Lukasz Preising) acknowledged my greeting and replied in a somewhat halting English: “We are a new order – the Order of the Holy Ghost – and our purpose is to promote a Culture of Life.”

The feeling of unreality hit me again. Youthful, cassocked, and constituted with the aim of promoting a culture of Life? What is this? I was basically waiting for the buzz of the alarm clock to wake me back up to my disenchanted post-modern Canadian reality.

But the sound of the alarm never came. I stood there with my mouth open and finally snapped out of it when I noticed the young men subtly and politely attempting to withdraw. “Can I interview you guys?” I asked. An interview was set with two of the seminarians, for the next day.

We were to meet again in the square before repairing to a café. Lukasz (Luke) Preising and Jan Plottke arrived at the appointed time. The cassocks were gone, alas, replaced by more conventional clergyman attire, but both nonetheless conserved that glow which young men wearing Roman collars seem to emanate.

Having made our way to a café and settled at our table, Lukasz began recounting in earnest his story. “We are a new community, a new Order in the Church. We are trying to renew the Order of the Holy Ghost, which started at the end of the 12th century.” Indeed, the Order of the Holy Ghost is an ancient medieval order founded by Blessed Guy de Montpellier in the Provence region of France. It was founded to help the sick and needy, and for its day was avant-garde for enlisting lay people to do some of the charitable work. The Order, eventually established by Pope Innocent III, was mainly known for its Europe-wide network of hospitals. With time, the male side of the order dwindled and eventually fused with the medical establishment, while a female branch of the order exists to this day.

But the order also founded other institutions, like schools where the children of the poor were instructed. “They gave them spiritual, human education, to make people grow,” Preising explained.

And in a foreshadowing of the pro-life charism it was to have in the 21st century, the 13th century Order had also been cutting edge in the pro-life domain, its hospital in Rome being the first fitted with what are today called “Dropboxes” (then it was called a “foundling wheel”), and what Preising calls “windows of Life”, which are safety deposit boxes for babies, where mothers can anonymously entrust their child to the care of others.

“This order spread all over the world – there were over 1000 religious” Preising said. However, for a host of complicated reasons, the 19th century saw the order disappear completely. Preising has a supernatural reason for their disappearance: “They were not loyal to their original charism.”

The Holy Ghost had not spoken his last word, however. In the middle of the 20th century, one man, Kazimierz Krucz, having read a book about the order, felt a call from God to resurrect it. A friar at the time, he eventually became a priest. Seeking discernment, he prayed often, in the parish where he worked, before a statue of a pregnant Mother Mary.

Unfortunately for the Polish priest, from the mid-century well into the late 80s, his country was under the thumb of totalitarian regimes: first the Nazis, then the Communists. It is no surprise, then, that his dream of resurrecting the Order of the Holy Ghost would only begin to materialize in the early 1990s, at the end of his life.

Meanwhile, Krucz’s parish, situated in the northern city of Gdansk, had become a pro-life destination. “It was a sanctuary for the protection of life, for single mothers to come and be helped to raise their child. There was a window of life (dropbox) there as well. The renewal of the Order of the Holy Ghost therefore began there, in Gdansk.” Preising recounted. The location had even received a visit from Pope St. John Paul II in 1999.

Nearing his death in 1998, Krucz began again to talk about the re-founding of the Holy Spirit Order. The parish had many vocations in the form of young seminarians. One of these, Wieslaw (Wesley) Wisniewski felt a calling to help found the order. This young man, who would soon take over as parish priest at the pro-life sanctuary, would eventually become the Order of the Holy Ghost’s first superior.

“And where do you guys fit in?” I asked. Luke Preising and Jan Plottke looked at each other, as if realizing the import of their situation, before answering:  “we’re the first vocations of this Order.” In fact, the Order today counts 14 members: 5 first vocations, of which Luke and Jan are two, four novices, four postulants and Father Wesley, the superior. Along with them work two other priests, as well as lay people, mostly out of Gdansk.

“Our charism is Life and Love – the formula John-Paul II used in Evangelium Vitae,” Preising said. He takes pains to emphasize that this landmark pro-life encyclical published in 1995 is a foundational document for them. “We are for the protection of life, from conception until natural death, for supporting single mothers.” Yet both Presing and Plottke recognize that the battle for Life is also a battle for the correct understanding of human sexuality. “We want to teach young people to be mature and responsible in their sexuality.”

All five seminarians are Polish born, though Jan Plottke lived most of his life in Australia, and Luke Preising lived much of his life outside of Poland. Three of the other “brothers” (the appellation the members of the Order give each other) lived in the Ukraine prior to their joining, and one member, from Chile, has no Polish connection.

“We consider our mission is to serve the entire world, not just Poland” Preisig affirmed.

The Order is now split between two cities: Krakow and Gdansk. The five seminarians in Krakow, besides being kept busy by their studies (they still have a few years before they complete their studies and are ordained as priests) are establishing themselves, and beginning their outreach.

Preising admits that not all is easy, financially speaking. “We are like a new born baby” he said. They have little money, “but God has always found people who want to help us.”

In fact, one year ago, before the feast of Pentecost, they prayed God nine days for Him to find them a house in Krakow. Soon after, an individual who had read about them in the newspaper called to donate an abandoned farmhouse he owned. Its renovation is now nearly complete.

I asked them how they thought they could reach out to today’s youth, which seems hopelessly steeped in a hypersexual atmosphere. Preising, who lived much of his youth as an atheist before being “confronted with the incredible fact that God exists”, was serene in his answer:

“The important thing is to speak to young people in their language and change their mentality.” And Presing affirmed, as if speaking from the experience of his life prior to his conversion: “Young people don’t want responsibility because in their depths they are afraid – the big challenge is to speak positively, to bring them from Deathstyle to Lifestyle.”

Hearing him speaking of a language for youth reminded me of Acts 2:6, when, as Luke the evangelist recounts, the Holy Spirit had inspired the apostles to go out into the crowd, and “each [person in the crowd] heard their own language being spoken.” It turns out that the Holy Spirit is again needed in our day, to reach out in new ways to heal the ravages of the Sexual Revolution.

And with the legalization of same-sex “marriage” in Ireland and now in the US, it seems as if the tidal wave of sexual, anthropological and religious confusion unleashed in the 60s is still gaining strength. However great the challenges, Luke Preising and Jan Plottke seem undeterred.

“The Holy Spirit is God” Preising remarked simply, “Not a small part of God: the horizon is infinite.”

The Website of the Order of the Holy Ghost can be found here. Google-translated English version is here. Financial contributions are welcome, and can be made here. For vocations inquiries, or for any questions, please follow this link.