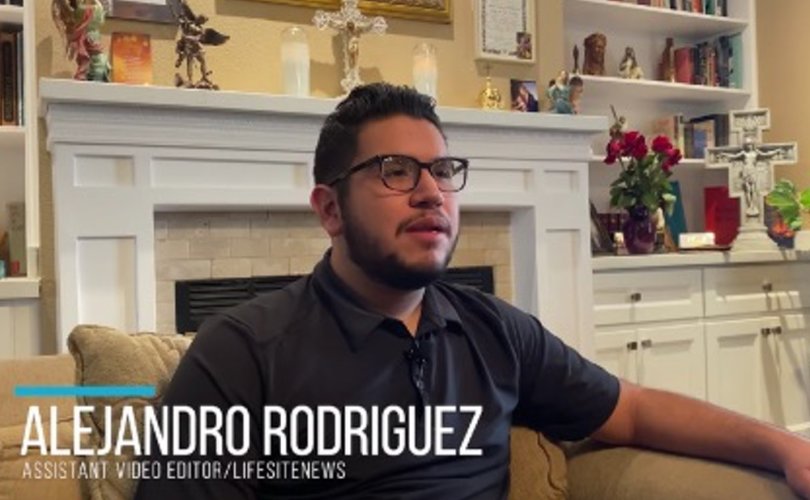 (LifeSiteNews) — Most of us can agree that the year 2020 was a tumultuous time for everyone around the world. In many ways, our lives have been irrevocably affected both in negative ways and even in positive ways. For me, I can say that I was forever changed after the previous year. For one, I lost my spiritual father two weeks after the shutdown. I didn’t allow myself to grieve or take time off from school because I felt like completing my degree was more important. Also, a few of my friends didn’t return to church after the churches reopened because they lapsed during quarantine. So, I lost a few friends as well.

In light of all the negative changes in my life, I did not expect my life to change for the better when my dad and I were watching the John-Henry Westen Show and John-Henry put up an ad for LifeSiteNews Internships. But at that point, I decided that I needed to do something different. With my parents’ encouragement, I applied for an open position in LifeSiteNews video department as an intern.

While the only claim I could stake in terms of experience was livestreaming at my parish, I was met with kindness and enthusiasm by Brian Limas, the director of internships at LifeSiteNews. He encouraged me to do my best even though I myself was not confident in my own abilities. (Spoiler alert: I got the internship.) My mentor at the time, Jason Taylor, very quickly taught me how to edit using Adobe Premiere Pro and After Effects. To my surprise, I gained a whole new skill set in a matter of two months.

Jason and Brian were so confident in my abilities that they encouraged me to edit a full-length John-Henry episode. So, in a matter of two months, I went from being a fan of the John-Henry Westen Show to being an editor of the show itself. I was completely blown away by how fast everything in my life was changing. Even then, I had no idea how much more it would change when I got a call from Brian asking me if I want to work as a paid employee at LifeSiteNews.

As I write this, I cannot help but smile remembering the excitement I felt when working my first day as an employee. It truly was a very exciting and rewarding experience for me—not that it was without difficulties, for sure. The video department had just undergone some structural changes in management, and we all were going through some growing pains. Thankfully, I had a new co-worker as well as my friends from the internship who acted as my support system. They were instrumental in helping me succeed. I also was able to seek advice from Brian Limas, who not only was my co-worker but also my friend to this day. Nearly a year later, in the fall of 2021, I was still quite content with remaining behind my laptop while editing away at another video. However, God had other plans.

— Article continues below Petition —
PETITION: Appeal to Catholic Leaders to reject abortion-tainted COVID vaccines and mandates!
Show Petition Text
12111 have signed the petition.
Let's get to 12500!
Thank you for signing this petition!
Add your signature:
Show Petition Text

In October 2021, I found myself at the doorway of Our Lady of the Angels Church and Prior in Arcadia, CA. While I had been there before with our correspondent, Jim Hale, as a production assistant, this time was different. I was there to conduct my first solo interview with Father Trevor Burfitt of the Society of St. Pius X (SSPX). I was asked to get the latest update on Fr. Burfitt’s case against Governor Gavin Newsom; Father had sued Newsom for the forced closure of his parish during the lockdown. Thankfully, he had won when a permanent injunction was issued, allowing the church to stay open with the prior, that is, Fr. Burfitt, having the authority to decide which COVID-19 preventative measures would be enforced at the church.

After the success of the interview with Fr. Burfitt, I was tasked with interviewing Will Donahue, the chapter president of Loyola Marymount University’s California College Republicans, who told LifeSiteNews about the Planned Parenthood fundraiser taking place that Friday. Oddly enough, LMU calls itself a ‘Catholic’ university, all the while encouraging pro-abortion ideology on its campus. In response, Will and the CCR organized a protest off-campus where students and alumni prayed the Rosary together. It was there that I met A.J. Hurley, the Director of the Survivors of the Abortion Holocaust.

A.J. Hurley told me about incriminating information his organization came upon involving the abortion industry’s organ trafficking business. Through mutual contacts from Pro-Life San Francisco, they discovered through public records requests that San Francisco State University had purchased organs and body parts of aborted children from Advanced Biotech Resources. I drove up with my father to Alameda where the offices of ABR were located; Pro-Life San Francisco had organized a protest outside their offices. A.J. showed me the invoices proving that SFSU had paid up to $20,000 for a fetal pancreas. One would infer that ABR was turning over a large profit from the deaths of unborn children.

I have to say that when I first started out at LifeSiteNews as an intern, I never imagined that I would one day be a reporter. Thanks to the support of my superiors, colleagues, friends, and of course, family members, now I have found myself to be the West Coast correspondent for LifeSiteNews.

While I cannot fully understand the reasons why God has placed me in this position, I am thankful that He has given me an opportunity to make a difference all the same. In the same way, we cannot understand why God sent His Only Begotten Son to sacrifice Himself on the cross for us. It is simply an act of pure, unconditional love that He gives of Himself completely for each and every one of us sinners in the hope that we will repent and reunite with Him in Heaven one day.

So, my friends, all I ask of you who are reading this is, please do not bury your talents! Each and every one of us has been given a unique opportunity to give glory to God in our own way, whether it is as a writer, a professor, a reporter, an IT specialist, or a doctor. God loves each and every one of us and desires us to love Him back by paying our gifts forward in His Name.

God bless you all and have a very blessed Christmas!