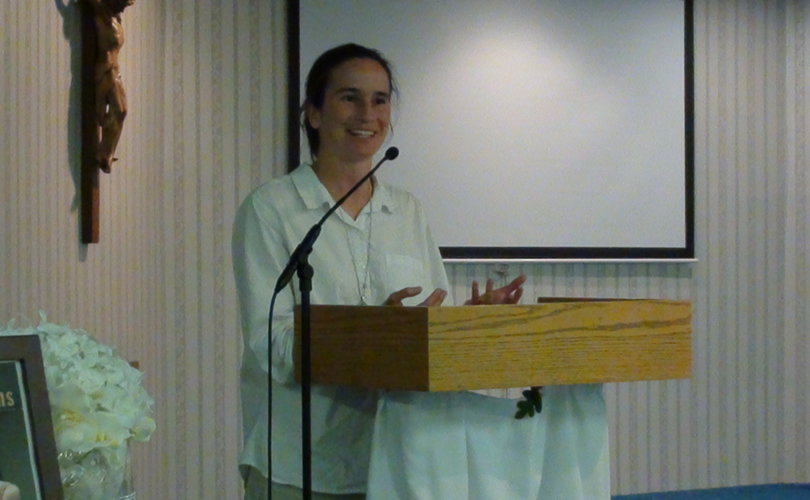 August 5, 2016 (LifeSiteNews) — Imagine that you knew that a kindergarten class in your neighborhood was to be targeted tomorrow by some terrorists, with all the children destined to be killed.

A not so far-fetched idea, considering the almost regular deadly attacks by so-called “refugees” in Belgium, France, and Germany. How would you mobilize yourself and others to prevent such a horrific kindergarten scenario?

That was a very poignant question posed to a large audience attending a July 20, 2016 Pro-life Meeting/Film night in Kitchener, Ontario, by Canada’s most influential pro-life heroine Miss Mary Wagner. She proposed that “there is a desensitization in Canada which we don’t see.” It is to the great injustice of abortion, where human lives (as in the kindergarten scenario) are barbarically eliminated, not in our imagination but in our reality.

Aside from Miss Wagner, who was the main guest of honor to this first assembly organized by a Kitchener based group “Pro-life Friends in Solidarity with Mary Wagner,” other guests that spoke at length were: Dr. Charles Lugosi (attorney at law); Jack Fonseca (Campaign Life Coalition spokesperson); and Stephen Woodworth (former Member of Parliament). Pat Morgan (40 Days for Life representative) spoke briefly to the very attentive crowd, gathered at St. Mary Our Lady of the Seven Sorrows Roman Catholic Church, with Pastor Father George Nowak kindly opening the Meeting with an excellent prayer for the unborn, health care workers, politicians, and all those attending.

The purpose of the Meeting/Film night was primarily to introduce Mary Wagner, a humble yet very courageous pro-life activist, who has spent over three years in a Milton, Ontario jail for trying to speak solemnly for the voiceless victims of abortion.

The second purpose was to introduce other pro-life experts and build solidarity amongst pro-life groups.

Miss Wagner showed her deep Catholic faith when she pointed out that “there are many injustices in the world, but the first is that we have turned away from God,” urging us to “trust more God, and put our lives in His hands.” After the meeting, Wagner, when asked about her greatest hardship to endure while in jail, sadly responded that it was the inability to attend regular Holy Mass. This was caused primarily by too few priests being available for this type of ministry to the prisoners.

Dr. Charles Lugosi, Wagner’s lawyer who will represent her this coming September in the Supreme Court of Canada — the first time an abortion case heard there since the constitutional challenge of Borowski v. Canada (1989) — said “civil laws don’t necessarily match God’s laws.” He also proposed various strategies for pro-lifers and warned us that the government wants to have the power to say you are not a human being — as with slaves in Africa, U.S.A., British Empire, and Jews, and other “undesirables” in Hitler’s Germany. Furthermore, Mr. Lugosi astutely indicated that when one removes the definition of a human being, the government can then do with anyone as it pleases, e.g. the unborn are still legally classified as non-human beings, to be discarded as one pleases, much like an unwanted wart or mole.

One can extrapolate and see how dangerous such secular ideology can be, with dehumanization leading to potential massive genocide — as with state-sanctioned extermination of the unborn worldwide, exceeding even in number the Holocaust from WWII. In Canada alone, at least 4 million (yes, human beings) have been killed by abortion from the time it became legal in 1969. With the recent passing in June by the Canadian Parliament of the most extreme euthanasia law in the world, are the elderly and handicapped next in line to lose their humanity status – with more millions to be eliminated, as with the unborn?

The next guest Jack Fonseca spoke very eloquently, comparing our society to Roman times where infanticide was common. However, he stated that it was thanks to Christian witness to the dignity of human life (when pagans in comparison placed no importance to infants), that a ban was finally established to end infanticide, by one of the Emperors. That was an excellent parallel to the barbarism of abortion in our secular society, which falsely refers to it as a human “right.” These topics and some film clips from another excellent pro-life film “The Silent Scream” (available on YouTube), were referred to and shown in the actual film of the night, entitled “Not About Mary Wagner” – a documentary outlining the history of the pro-life movement in Canada.

Stephen Woodworth, our last main speaker, spoke very fluently and with authority about being compassionate when delivering truth and justice. He indicated that “Miss Wagner inspires us since she has made herself vulnerable.” Also, Mr. Woodworth left the audience with an uplifting thought and complimented her and another very determined and unassuming Canadian pro-life activist by stating that “persistence is a true test of character,” and “this is the light that shines in Miss Mary Wagner and Mrs. Linda Gibbons.”

The organizers of the event wished to thank everyone that contributed to the success of the evening, including the very attentive and supportive audience totaling approximately 200 people.