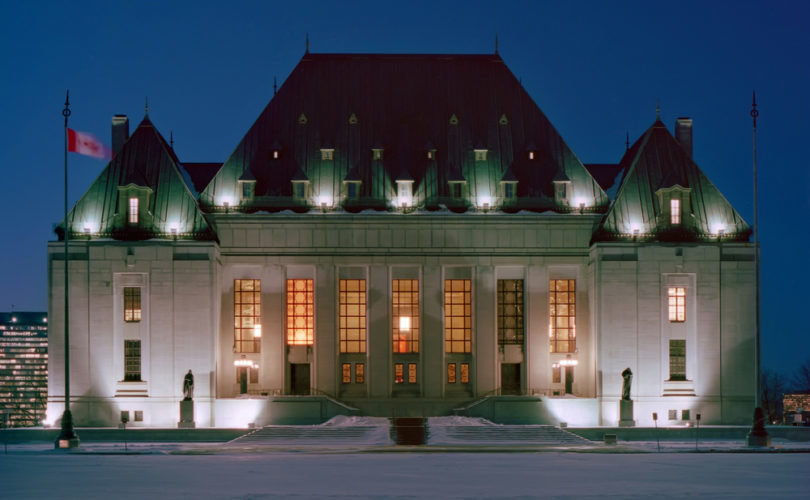 February 9, 2015 (LifeSiteNews.com) — The Supreme Court of Canada’s unanimous ruling to legalize assisted suicide in the Carter v. Canada case, is lauded in the media as a victory for compassion and human rights, and as another triumph over the “old order”, which organs of public opinion and government have long declared to be repressive and overdue for reform. For several decades now, step by step they have been busy rewriting the narrative of the West, proposing that the march of history toward a more “humane” society is inevitable and just. Yet, by dismantling the moral foundations of our society—a still largely Christian society—they now leave every human being vulnerable to murder. The sort of humanism they advocate amounts to a belief (rarely stated, but endlessly enacted in practise) that some human beings are less human than others, and thus are disposable. Such is their blindness to the actual lessons of history.

The fall of the Roman Empire, along with the demise of other empires, offer ample evidence that civilizations cannot survive the corruption of their moral foundations. Make no mistake about it: we are under the oppression of a growing oligarchy of moral relativists, who like all social revolutionaries consider themselves to be the heroic champions of a new moral order. Even if some are draped in the mystique of authority and dignified by public office, we would do well to remember that many a past king and high court judge has betrayed the foundational principles that their offices were supposed to defend. Like our own Supreme Court, like our own Parliament, they attempted to rewrite not only the laws but the undergirding principles upon which all just laws are based—“evolving principles,” as they saw it. From a cultural perspective, we might ponder Hans Holbein’s portrait of the majestic Henry VIII, painted the year following Henry’s execution of St. Thomas More. See the trappings of power, the body language, the face, the eyes. Then ponder Holbein’s earlier portrait of More. The contrast is informative, well worth the investment of time. We might also ponder the famous photograph of the members of the Supreme Court of Nazi Germany raising their arms, from the bench, in the Hitler salute. The trappings of the state judiciary, the solemn robes, the dignity of Law, veiled the dark satanic reality beneath the semblance of order.

Writing some decades ago, Malcolm Muggeridge pointed out that euthanasia would be the logical consequence of the abortion holocaust: “It is true that the delay in creating public pressure for euthanasia has been due to the fact that it was one of the war crimes cited at Nuremberg. So, for The Guinness Book of World Records, you can submit this: that it takes about thirty years in our humane society to transform a war crime into an act of compassion.”

The delay is over. The unthinkable is now here. Of course, we the peoples of the late West are not Nazis or Stalinists or über-monarchists or fascists of any declared sort. We are the nice people, the compassionate people. We are “democratic.” Yet authentic democracy is a fragile thing. Aristotle in his Politics and Plato in The Republic warned about what happens to a people when a democracy degenerates into an oligarchy. These wise men taught from experience, and the repeated lessons of subsequent history confirmed, that oligarchies will degenerate into tyrannies. And with tyranny comes murder in epic proportions. And after tyrannies exhaust themselves and thoroughly devastate their own peoples, there comes revolt and chaos, fire and blood—the expanding reign of death.

We who now live in the midst of yet another repeat cycle of the tragic pattern have been propagandized into thinking ourselves exempt from the consequences. Supposedly, we are in control, we will avoid the mistakes of the past; we are the “enlightened,” the visionaries riding the cusp of an inexorable progress, pushing forward into the glorious future and creating a brave new world. However fine the rhetoric that swaddles, nuances, and rationalizes this catastrophic delusion, it remains what it is: Now sanctioned by the state, the domain of unjust death will widen exponentially and human rights will further decline—most importantly the fundamental right to life. The proliferation of other forms of active euthanasia will soon follow, including infanticide, and after that we can only imagine, for there will be no more barriers.

Law is a guardian and a teacher, and the Court's decision has just instructed the young, and generations yet unborn, that the value of their lives is relative, ultimately a disposable commodity. Let us not be fooled into thinking that the ruling is intended for only an extremely small minority of citizens, the severely disabled in chronic pain who choose, after rational consideration, to end their own sufferings. In fact, the gates have now been opened to a massive assault upon those who are most vulnerable in our society, the elderly, the confused and depressed, the homeless and psychotic, the sick and impoverished, the many who are already struggling with the lie that their lives have no worth, not to mention children with birth defects and mental handicaps. And why not behaviour problems? Yes, with a little compassionate persuasion from medical guidance counsellors or agents of the psychology industry, offered with gentle voices and relentless reasoning, large numbers of people will be encouraged to accept a safe, hygienic, practically painless exit from this world. By subtracting themselves from the social equation, willingly or not so willingly, they will be convinced that they can find their value by exterminating themselves and thus contributing to the new social good.

But of course, all of us will remain equal, because ours is, after all, an enlightened liberal democracy. However, to paraphrase Orwell, some of us are more equal than others, and as the erosion of the moral foundations of the West continues to slide into a disguised pan-ethnic cleansing, more and more of us will become less and less equal. It is an old and tired deception, and it is a wonder that anyone still falls for it. To put it simply, human nature so often succumbs to deception because we want the deception. The defence of principles demands sustained effort and courage; the quick fix gives temporary relief and costs us little—in the beginning.

The power over life and death belongs to God alone. When an individual or a government usurp the divine right, there are consequences. Throughout history, without exception, the consequences are always negative. Unless the men and women who now hold office in this land engage in profound rethinking and turn to courageous defence of life, we will all suffer the consequences. It is to be hoped that our Parliament will recover its basic memory and defend what remains. If, in an extraordinary and virtually unprecedented act, it chooses to over-ride the Supreme Court’s most recent decision and reinforce the Court’s 1993 decision in Rodriguez v. British Columbia—that as a fundamental principle of justice, the state’s obligation to protect the vulnerable outweighs an individual’s “right” to self-destruction—there will still be hope for us. If not,  . . .

And: “Woe to those who call evil good and good evil, who put darkness for light and light for darkness, who put bitter for sweet and sweet for bitter!”— Isaiah 5:20.