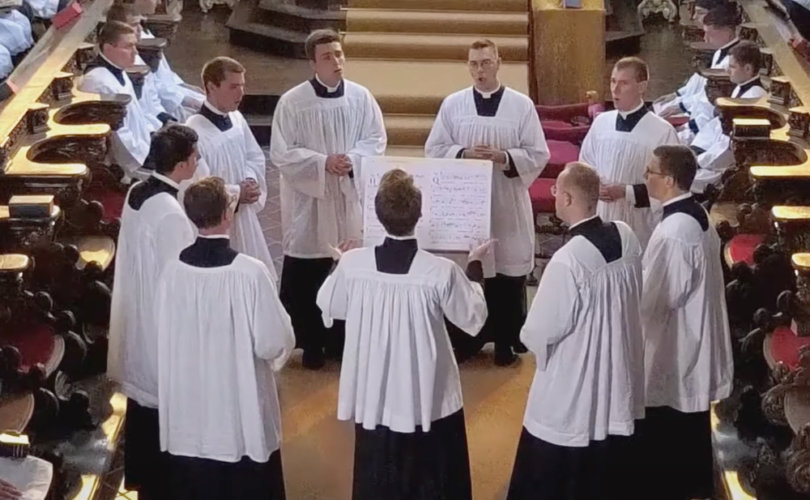 (Dowry Magazine) – Every year on Christmas Eve, millions worldwide tune in to “A Festival of Nine Lessons and Carols,” broadcast live from King’s College, Cambridge. This service, which has become a bastion of the Anglican choral tradition, was held for the first time in 1918.

But the format of nine Biblical readings, interspersed by carols, can be traced back to Christmas Eve at Truro Cathedral in 1880. It was conceived by the then Anglican bishop of Truro, Edward White Benson — later Archbishop of Canterbury — whose youngest son was to become the Catholic priest and novelist, Monsignor Robert Hugh Benson.

This original service, held at 10 o’clock at night, was inspired by the traditional Night Office of the (pre-Reformation) Church, known as Matins. Christmas Matins, which immediately precedes Midnight Mass, is divided into three Nocturns, each with three psalms and three readings (‘lessons’).

Between each of the nine lessons is a musical interlude in the form of a Responsory, which Benson replaced with popular carols (festive folksongs that had been banned under the Puritans two centuries prior).

Still sung by traditional Catholic communities, Christmas Matins is a solemn service of preparation, as the Church keeps watch—just like the shepherds— until the sacred hour when Christ was born.

The recording is primarily Gregorian chant, with most of the exquisite Responsories in their authentic form, but also contains some 16th-century polyphonic settings. Intended as a liturgical “experience,” four of the solo lessons — sung to ornate melodies — are included, which should also offer the listener an opportunity to meditate on the sublime mystery of the Incarnation.

The CD ends with something that we sing at the seminary on Christmas night, after the liturgy: the famous German Christmas carol, Stille Nacht (Silent Night). My arrangement of this carol reflects the internationality of our community, with verses in German, French and English (the three official languages of the Fraternity), then finally in Latin.

I became director of the Schola in Wigratzbad in my second year at seminary. I was very pleased with the progress that we were able to make musically during my four years of direction, thanks to the keen support of the superiors, and having been blessed with some talented singers among our vocations.

The time therefore seemed ripe to undertake a major recording project this year. After our American confrères’ success with their Requiem CD (released in 2017), we decided to collaborate with the same recording label to produce our own recording, but this time with current seminarians from our European seminary.

Since its release on 28 September, Sancta Nox remained at number one in the US classical charts for nearly two months.

While it is wonderful to know that our musical message has reached so many people across the world, this success may also be evidence that there is a strong desire globally for music that is more demanding and profound, over more superficial forms of music.

Its success is also due, no doubt, to the excellent professional recording quality, thanks to our distinguished award-winning producer, Christopher Alder, who has previously worked with household names like Claudio Abbado and Placido Domingo.

This recording is a way of reaching people who may not otherwise know the beauty of sacred music, who may never have encountered the traditional liturgy, or even the Catholic faith. Music has a unique power to reach souls, and so we hope that our singing will lead people to reflect on this great mystery: that God was born for us in Bethlehem and is born for us each day in the Holy Sacrifice of the Mass.

Copies of the CD are available for purchase (in support of our seminary) directly from our U.K. apostolates in Reading and Warrington, or from the Latin Mass Society’s online shop and from The Guild Book Shop.

Readers based in America can find the CD on the FSSP website and from Sophia Institute Press.

Deacon Evans, who directs the schola for the CD, was born and brought up in South Wales. Having been Head Chorister at Llandaff (Anglican) Cathedral, he won a music scholarship to Eton College. While at university in Cambridge, where he studied Oriental Studies (Arabic and Hebrew), he sang with the choirs of St John’s, King’s and Trinity colleges. Deacon Evans was received into the Catholic Church in his final year of university, after having encountered the Traditional Latin Mass. He then worked for five years in the classical music industry. He is a Companion of the Order of Malta and has been very active with them in helping the poor and the sick. He entered the FSSP Seminary in Wigratzbad in 2015. In May he was ordained deacon and is due to be ordained priest in June 2022.

Reprinted with permission from The Dowry Magazine