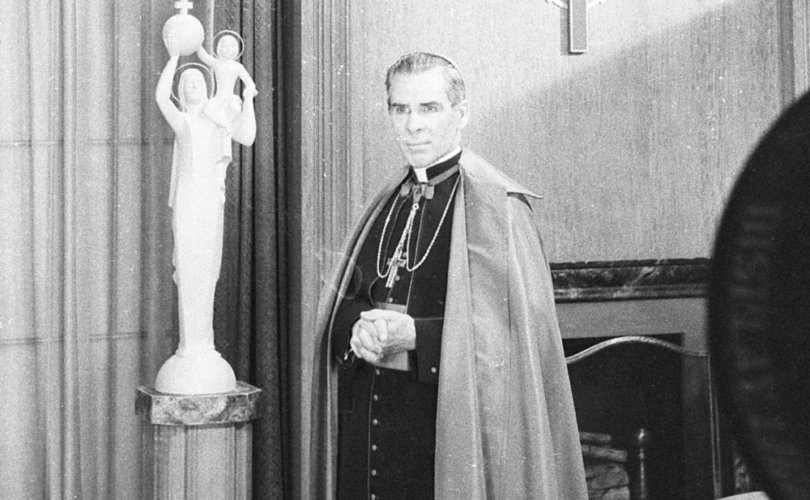 December 6, 2019 (LifeSiteNews) — First, an admission. As an old newspaper reporter — man, it would bother me when a writer felt the need to inject himself into a story. A modern-day example: If you’re an out-of-town friend who finds himself in a steady rain that causes minor flooding — and that urge wells up in you to “report” yourself “safe” on social media — well, stuff that urge down next time.

I just now viewed Raymond Arroyo’s Thursday The World Over report, so I am mainlining myself (perhaps like a drama queen) into a story in which I don’t belong.

Ven. Sheen is quoted more often in my book, The Priests We Need to Save the Church, than anyone else. I believe he’s brought more souls to Christ in the Catholic Church than anyone outside Christ and St. Paul.

One early Sunday evening in the late 1940s, in the parlor of a large white-brick, black-shuttered house in the exclusive Foxhall neighborhood in Washington, D.C., my great-grandmother looked at Fr. Fulton Sheen and said with the casualness of one smoothing the hem of her skirt, “Your niece’s hips are displaced.” Sheen, for once, was speechless. Martha King had noted the gait of the child walking up the street. Later, a doctor confirmed her eye, on which she was dependent at Hialeah race track while on Florida vacations. And at Gulfstream and Pimlico, too.

Of Irish wit (the unbridled kind), Martha told short-statured Sheen she wasn’t keen on those “high heels” he thought gave him inches of gravitas while teaching his Catholic University of America students. So, of course, Sheen took a liking to the lady up the street, who prayed the rosary on her knees each evening after dinner. A fine tradition started. Sheen visited with Martha and her family each Sunday night.

“I think Archbishop Sheen saw her as a joy-filled escape,” Martha’s granddaughter Mimi Shea, my dad’s sister, who was bequeathed one of Sheen’s rosaries, told me once. “It was a very neighborly friendship. I think he knew what she knew — there was some vanity in him — and she made sure to point it out. And he absolutely loved her for it.”

Then Sheen disappeared to New York, where, because of his Emmy award–winning show, Life Is Worth Living, he achieved world fame.

Last year, when I wrote my book about the desire for holy priests, I was inspired by The Priest Is Not His Own, one of the sixty-six books Sheen had authored. Conveying to you the theological opulence within would be like riding a bicycle to the moon. I am right now looking over the many notes I took and kept in a green binder. Here is one from  page 64:

The mortified priest, the priest detached from the world — these inspire, edify and christify souls.

Fulton Sheen was a supernaturalist — that is, he believed in miracles, the conversions of once rotten souls, and inn how the sanctifying power of a priest’s absolution could break a communist heart in two and move it toward sainthood.

Sheen was a true friend of Jesus. As busy as he was, he committed an hour in silence with Him each day of his priesthood.

Cupich, Dolan, and Rochester’s Bishop Salvatore Matano bring to mind this morning something that unfolded last year: acquisition editors at every Catholic publishing house I submitted my book manuscript to rejected it, saying to me in one way or another, “You can’t tell a priest how to be a priest.” My response was, “It’s not that; it’s just a book on what I thirst for from them.”

After taking an unpaid sabbatical to write the then-orphaned book that lay like a stone in my head for 20-plus years, I was a rather disconsolate and questioning soul. I had Catholic school tuitions, a daughter set for college, and no cash coming in after years of steady income. It was then, naturally, that I was pulled to Sheen’s masterpiece, Peace of Soul, because I needed peace of soul. One line from it: “It is always through sweat and blood and tears that the soul is purged of its animal egotism and laid open to the Spirit.”

I am from a family of good priests, and as an old reporter, I read biographies of our greatest priest-saints and interviewed dozens of members of the clergy to gather their thoughts on the crisis in the Church and the seeming re-engineering of the modern priesthood. Many dozens of hours of interviews led me to a holy exorcist and soul-reader named Msgr. John Esseff, who resembles a weather-beaten stooped-back monk. He lives in an apartment a little larger than your master bedroom bathroom. He explained the heart of the disease in a few sentences.

“I’m a priest sixty-five years, and I’m very strong about this. We don’t have a priest shortage right now, nor do we have a shortage of vocations,” he said. “What we have is a shortage of priests who pray. We have a severe crisis in our priesthood because priests are not praying. They are not fathers.”

Cupich, Dolan, and Matano do not act as supernaturalists or fathers. The two are directly linked. When they implored the Vatican for Sheen’s beatification delay, they did not care about the tens of thousands who, yet again, have been gutted and disillusioned at what seems a subterranean plot to dam up holy things.

More importantly, they are not supernaturalists. A supernaturalist understands that a priest like Fulton Sheen, who’d spent a couple thousand of hours in front of Jesus, exposing his soul to catch His wisdom in candlelight, would not, could not — cannot — be caught up in scandal, as these three bishops now are.

Sheen converted tens of thousands of souls, due in large part to the sacramental energy he received at the Holy Hour. Sheen drew folks in; these bishops push them out.

Kevin Wells is a Catholic speaker, president of the Monsignor Thomas Wells Society for Vocations, and author of The Priests We Need to Save the Church (Sophia Institute Press, 2019).