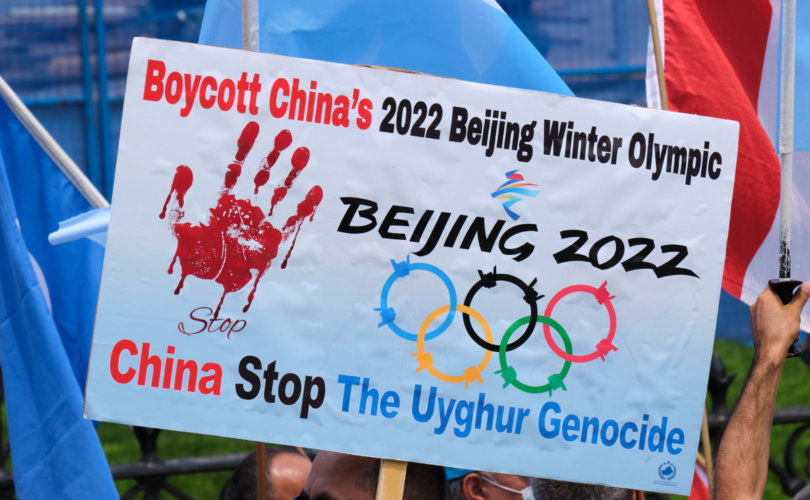 (LifeSiteNews) — Those of us who oppose the Beijing Olympics have tried for years now to alert our global elites to the catastrophic scandal of holding the first-ever Winter Olympics in China at the very point when the Chinese Communist Party (CCP) is being confronted internationally for its crimes against humanity – including a “genocide,” as its treatment of the Uyghur population has been officially designated.

As I wrote recently, “It’s hard not to feel a creeping sense of impending defeat” as the Olympics commence. “Despite our winning the support and sympathy of a huge swath of the public, many among the international elite — including those with the power to decide the fate of the Games — remain unmoved.”

I was honestly shocked that American officials, corporate executives, media networks, and athletic associations would just plow ahead into this debacle – despite a continuous stream of embarrassments and humiliations carried out by the Chinese regime.

Before the Games even began, China made clear that everyone involved would be heavily surveilled, censored, and – if need be – arrested, lest anyone insult the genocidal dictatorship by mentioning any of its millions of concentration camp victims or advocating change. Within hours of the opening ceremony kicking off, Chinese officers had already dragged off a Dutch reporter in the middle of a broadcast.

The United States’ owner NBC-TV, meanwhile, had the cynical good sense to broadcast the Olympics from home turf – profiting from the event and legitimizing it, while at the same time admitting by their actions that they know how dangerous and inhumane it would be to place any of their own within reach of the CCP.

I was shocked, I say. But then I realized something about our “woke” elites. I had been operating under a misunderstanding of what it means to be “woke.”

Now, if I’d asked them to stand against the tyrannies and abuses of the early 20th century, I know I would have had more success. Browsing social media, in fact, I recently came across this courageous piece of woke activism from The Washington Post:

The Washington Post has compiled the first database of slave-holding members of Congress by examining thousands of pages of census records and historical documents. More than 1,700 congressmen once enslaved Black people. This is who they were …

Meanwhile, one journalist has compiled a list of 23 former senators and congressmen, all still alive today, who advocate for the slave-holding Chinese State at our nation’s capital as lobbyists. Clearly, he is not woke, and you’ll probably only find his work featured by alternative media sites like Breitbart.

So up until now, I’ve approached our woke elites in an entirely wrongheaded way – that is, by asking them to bravely stand against the evils of our time. I realize now that if I really want them to intervene for Uyghur Muslims, I need to address my petition to the woke of the year 2092 …

I am Jason Jones, President of the Vulnerable People Project. First of all I want you to know that I am not writing to you about an urgent matter. I’m sure you’re nagged, in the very back of your mind, by the evils of your time.

Perhaps in 2092, there are millions upon millions of religious and ethnic minorities newly enslaved by another adversary state than China. Perhaps that state, too, engages in systemic rape, forced abortions, forced marriages, and a profiteering organ-harvesting market

But I would never ask you to summon the courage to speak up for the men, women, and children of that regime. It’s much too dangerous, and could easily damage your reputation, to say nothing of your profits. Besides, given your complicity up to this point, the whole topic is just bound to make you feel kinda bad.

No, what I’m proposing is much simpler. It will make you feel good! Call it a form of self-care.

Below please find a list – a treasure trove! – of the names of powerful men and women who were the elites of my time, here in 2022. You won’t believe the evil they’re guilty of! Get this: They ignored the plight of the powerless as they were enslaved, slaughtered, and brutally controlled by the Chinese Regime.

In fact, rather than so much as speak against China, which at this time is a formidable and growing economic power on which many Western countries rely heavily for goods and services, these elite men and women awarded the dictatorship with the honor of hosting our Olympics!

These names, from corporate executives to athletic officials to government bureaucrats to media tycoons, deserve to be remembered and held in contempt.

Please, for the sake of the vulnerable, use your power and influence to name and shame them.

Below I’ll supply those names to you non-woke readers of the year 2022 as well. Please do share and consider these names, and sign our petition against the Genocide Olympics by going to CCPGenocideOlympics.com.