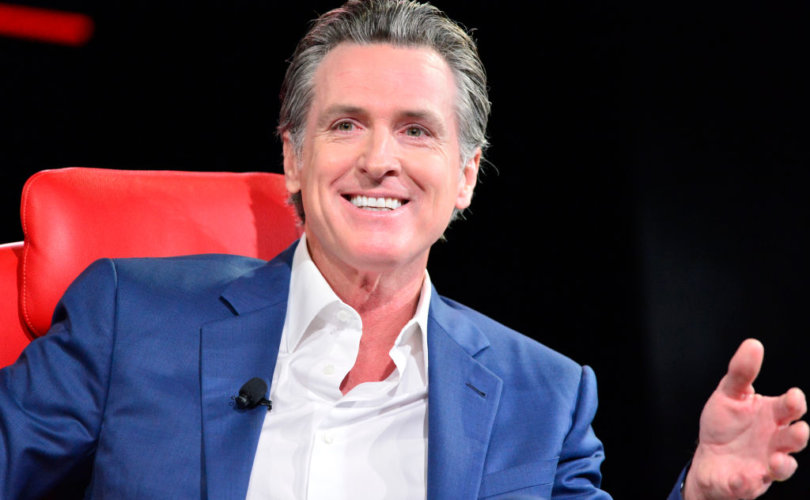 (Catholic Answers) — “Need an abortion? California is ready to help.”

I can imagine the devil sitting in his office, at the top of the highest skyscraper on hell’s equivalent of Madison Avenue, weighing an ad campaign. “Straightforward. Maybe a little boring. Could be worse. Here now: ‘South Dakota doesn’t own your body. You do.’ That’s better. And… oh! This!” And, seeing the Bible verse, he guffaws. “Well done!”

It’s not fiction. With a massive lead in polls – California, where I live and from which Catholic Answers operates, being an effective one-party state – Democrat Gov. Gavin Newsom has dipped into his personal re-election fund to advertise abortion in states that restrict it. Roadside billboards will now assure residents of South Dakota, Indiana, Mississippi, and four other states that if they want to kill their children, someone out west will make it happen. Newsom announced the project with fanfare and a jab at pro-lifers, calling their professed concern for the unborn “a total farce.”

Even worse, Newsom – along with Slubgob, Slumtrimpet, and whatever other minions assisted in this project – commit blasphemy by co-opting Sacred Scripture in service of abortion, appending the holy words of Jesus to one of his billboards: “Love your neighbor as yourself. There is no greater commandment than these.”

No surprise here. Satan, having no imagination, can only “create” by perverting the good not of his making. Likewise, it seems, the crowd running California.

There are many other bible verses these fellows might have considered. For example, James 1:27: “Religion that is pure and undefiled before God and the Father is this: to visit orphans and widows in their affliction, and to keep oneself unstained from the world.” But California turns this noble sentiment on its head. After all, we could say it’s a sort of widow who, abandoned or abetted by her husband or the man who should be her husband, slouches toward a once-golden state to have her child exterminated.

Much more, we could say it’s a sort of orphan whose parents so remove their love from him, so remove themselves from him, that they carry him off to have him killed when he is most vulnerable. California now reserves the worst of its violence for these two groups, exalted by God. And their blood cries out to heaven for vengeance.

Abortion is a battle for the fate of generations. On the evil side – the side where Newsom and his accomplices have now hammered their flag in deeper – is an increasingly unabashed campaign to wipe out the next generation and call it holy work.

As for us, on the good side, we mustn’t be deceived: our mission is not just to protect the next generation from horrific death, not just to defend these children to their birth, or even to support them to the end of their earthly lives. More than all that, our mission is to guide them to that pearl of great price, the saving Faith.

— Article continues below Petition —
Join Bishops in calling out Pope Francis' statement for contradicting the faith
Show Petition Text
5973 have signed the petition.
Let's get to 6000!
Thank you for signing this petition!
Add your signature:
Show Petition Text

Here we must start with our own children. If we win them only their bodies, then we leave them like the bones in Ezekiel’s valley: “There were sinews on them, and flesh had come upon them, and skin had covered them; but there was no breath in them” (Ezek. 37:8). Only when the prophet prophesies do those bodies come to life. And only when we exert ourselves to form our children will they be formed, in the way that counts even more than that way described so memorably in Jeremiah 1:5. Then they’ll have what it takes to fight after we’ve gone on to our eternal reward, when, God willing, they have burgeoning children of their own. The more such children grow up, the closer we come to a society that re-learns to hate wilful murder.

These blasphemies of Gavin Newsom and the other leaders of California should fill us with fear– fear for him, of course, whose soul is in grievous danger of a fate too horrible to comprehend. But not just for him. The currency of his influence is great, and it buys many sins for those under him – for the women cozened into the gnashing teeth of the Golden Beast, for the abortionists who will kill that many more children, for every Californian who shrugs at (or, God forbid, supports!) this abomination. Newsom is an important man, and just as “the continual prayer of a just man availeth much” (James 5:16, DRA), the sins of the man in a high place seep farther, and stain darker.

They also creep upward, to those in authority over him. Woe to the man who has the power to correct the governor and doesn’t! And so our prayers should turn now to Bishop Jaime Soto of the Diocese of Sacramento, among whose flock Newsom counts himself. We don’t have to clamor for Soto to “do something” for us to see, though he might consult with his brother bishop in San Francisco for the benefit of the faithful in a time of great confusion.

Regardless, let us hope that his excellency is imploring Newsom in private, and wrestling in prayer with the devil for the soul of this man, who, however fancy his fleece, is nevertheless still a sheep, who got away and must be found (Luke 15:3-7).

There are many tools available to us to defend innocent unborn children from California’s new ad campaign. Pregnancy resource centers, sidewalk counseling groups, and pro-life non-profits all humbly ask for our talent and treasure in pursuit of this noble goal. But let’s not forget also the private, quiet, mostly unseen but ultimately crucial efforts God demands: ceaseless prayer; the sacraments; and the real power we have, in our own small spheres of influence – our marriages, our religious vocations, our families and friends – to form virtuous souls who scoff at Satan’s ad campaign and return joyfully to their work of bringing forth the kingdom of God.

That is what abortion snuffed out in two generations looks like.

Reprinted with permission from Catholic Answers.