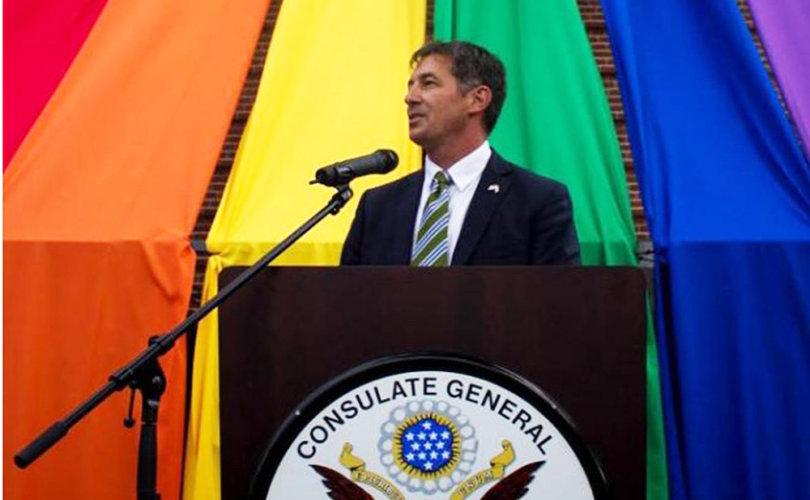 WASHINGTON, D.C., January 19, 2017 (C-Fam) – The Obama administration positioned their top U.S. homosexual rights diplomat into a key position within the State Department which will make it harder for the Trump administration to change current U.S. policy opposing traditional values on human sexuality.

An informed source told the Friday Fax that President Obama’s Special Envoy for the Rights of Lesbian, Gay, Bisexual, Transgender and Intersex (LGBTI) Persons Randy Berry “has been moved over to DRL (the Bureau of Democracy, Human Rights, and Labor) as a career DAS (Deputy Assistant Secretary)…. That is where the Obama agenda will be hardest to overcome.” The DRL formulates policy that U.S. staff at the UN execute.

Berry stirred controversy for his part in inserting the homosexual rights agenda into the U.S. office dealing with religious freedom abroad.

Another source told the Friday Fax that Berry “not only oversaw the incorporation of LGBT into the religious freedom office, something not included in the Congressional mandate that set the office up, but he also oversaw the persecution and eventual exit of employees, foreign service officers, Christians, who objected to mixing LGBT with religious persecution.”

In the last two years, the Obama administration has been working to entrench the LGBTI agenda such that future U.S. administrations cannot repeal it. Berry’s office was formed in 2014 by Senate Democrats, the same year that the U.S. helped form “Core Groups” at the UN and Organization of American States (OAS) and created a new diplomatic post, a special rapporteur, at OAS to report on alleged abuses against LGBTI.  The UN established the same position this year after a contentious debate.

At a press briefing at the first anniversary of his office, Berry said he is successful because he assures elites in other countries that the U.S. is not promoting “special rights” for LGBTI persons. The approach he said is to equate—as “twin issues”—violence against LGBTI persons and “non-discrimination.”

Non-discrimination is a category of human rights that has never included sexual orientation and gender identity but which activists are trying to get countries to accept.

While ending violence against LGBTI persons is widely supported at the UN, changing human rights categories to include sexual orientation and gender identity is largely opposed. Such a change would put nations in violation of their international treaty obligations if they have laws protecting traditional marriage, criminalizing homosexual conduct, or banning homosexual material in schools.

Even so, Berry said he is not opposed to the use of sanctions and travel bans against governments that will not comply, but hopes that his work “bridge building,” presumably through means such as foreign assistance, with governmental leaders.

Berry reported that in his first year as special envoy he met with 42 countries including the Holy See, with activists, and with religious leaders whom he said were largely in favor of the progressive agenda. He said he made the transgender issue a priority.

The silence of the shepherds on homosexuality: An interview with Robert Reilly

Judge asked to dismiss case against U.S. pastor accused of ‘crimes against humanity’ for criticizing homosexuality

Embracing homosexuality is America’s future, Obama says in State of the Union