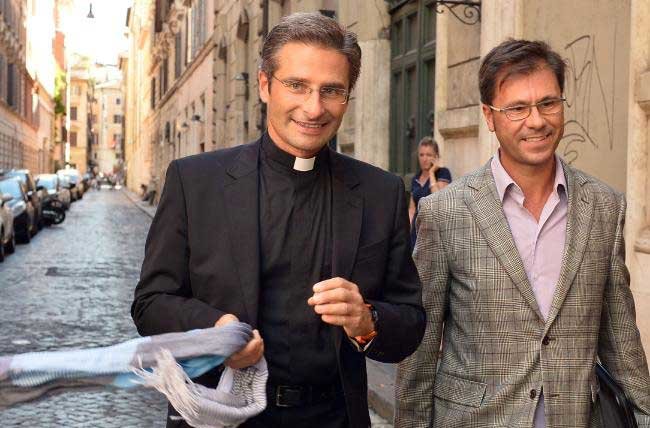 Msgr. Krzystof Charamsa and his lover in Vatican City

October 6, 2015 (Catholicculture.org) –Msgr. Krzystof Charamsa evidently thought that he was advancing the homosexual cause by coming out as gay on the eve of the Synod of Bishops. I think he miscalculated badly.

The Vatican quickly dismissed Msgr. Charamsa from his post at the Congregation for the Doctrine of the Faith (CDF). He had anticipated that, and said he was willing to accept it for the good of the cause. “I’m prepared to pay the consequences, but it’s time the Church opened its eyes, and realized that offering gay believers total abstinence from a life of love is inhuman.”

Sure, the Polish priest captured the headlines. When an official of the Roman Curia proudly announces that he has a homosexual lover, he’s will draw plenty of publicity. Given the sympathies of the mass media, most of that publicity will be favorable.

But Msgr. Charamsa said that he wanted to influence the Synod by his announcement; he wanted to impress upon the bishops that homosexual love “must be nourished by the Church.” Is that the lesson that bishops will learn from his shocking announcement?

By making his shocking announcement, Msgr. Charamsa alerted the Catholic world to the fact that he—an official at the CDF, which handles questions of doctrine; and a theology instructor at two pontifical institutions—actively opposes the teachings of the Church. For years he has been working inside the Vatican, not to defend Church teaching but to change it. He has been, in effect, a double agent.

After Pope Benedict XVI resigned, and through the first few months of the current pontificate, there was a great deal of talk in Rome about an alleged “gay lobby” at the Vatican. Discussion of that topic gradually died down; now it has resumed. How can an active homosexual, with a gay lover and an animus against Church teaching, thrive within the Roman Curia? Msgr. Charamsa’s press conference has given new life to that discussion.

During the next three weeks, whenever the subject of homosexuality is discussed at the Synod, bishops will naturally think about the Charamsa scandal. They will wonder once again about the influence of a “gay lobby,” and wonder whether that lobby is working with the Synod itself. They might even ask themselves how much damage the lobby has already done.