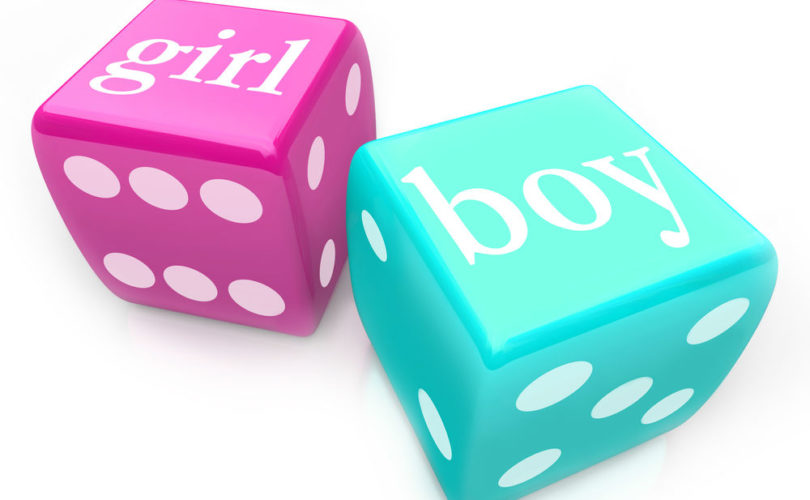 There are times when you have to read something two, three, maybe even four times to make sure it’s actually serious and not a joke—and even then you’re not certain. Such was the case with Christin Scarlett Milloy’s recent article for Slate, breathlessly titled “Don’t Let the Doctor Do This to Your Newborn.”

Don’t let the doctor do what?

Here’s how Milloy describes it:

“It's called infant gender assignment: When the doctor holds your child up to the harsh light of the delivery room, looks between its legs, and declares his opinion: It's a boy or a girl, based on nothing more than a cursory assessment of your offspring's genitals.”

Yes, she’s saying—she’s actually, seriously saying—that a doctor who tells you the sex of your baby could be doing the baby irreparable harm, by not taking into consideration that in later years, that child might not want to belong to that sex.

In fact, Milloy suggests that infant gender assignment, that practice that takes place after every birth, is playing “Russian roulette with your baby’s life.”

Why am I taking this kookiness seriously, even enough to mention it? Because I think we need to recognize what got this culture to the point of such absurdity—and where we might go from here.

For years now we’ve been hearing ever louder arguments that we need to free children and everyone else from the tyranny of gender, with all the practical implications that argument has—laws that say that boys can use girls’ bathrooms if they identify as girls, for instance. Or parents who trot out their five-year-old daughter and announce that she’s decided to be a boy.

There’s a reason, as my friend Karen Swallow Prior points out in a recent article at Think Christian, that “Facebook offers 56 gender options for user profiles.” No kidding.

Prior goes on, “While [Milloy’s] article is clearly intended to be shocking, its argument has, in fact, been a long time coming. Theories about the ‘constructedness’ (as opposed to givenness) of human sexuality … have been trickling down from the ivory tower for decades.”

And not just trickling down from the ivory tower. How about trickling down from the highest court in the land? Chuck Colson often said that Justice Anthony Kennedy’s 1992 decision in Planned Parenthood v Casey was a watershed cultural moment. “At the heart of liberty,” Kennedy wrote, “is the right to define one's own concept of existence, of meaning, of the universe, and of the mystery of human life.”

And Milloy’s article is simply taking all this to its logical conclusion.

And even people who get Milloy’s logic are appalled with that conclusion. Like the commenter who wrote: “I totally think it's wrong and weird to push a child to like ‘boy things’ or ‘girl things,’ and I'd genuinely try to be open and accepting if my children turned out to be transgendered. That being said . . . this article is bonkers, right? [It’s] not just me?”

To that commenter and the others who expressed similar sentiments, I would say: It is bonkers, and no, it’s not just you. But you may have helped us reach this point, whether you meant to or not.

Maybe, in the long run, we’ll all have cause to thank Christin Scarlett Milloy for ripping away the blinders and making people face facts. Maybe, unwittingly, she’s brought us to the tipping point we so desperately need to reach.