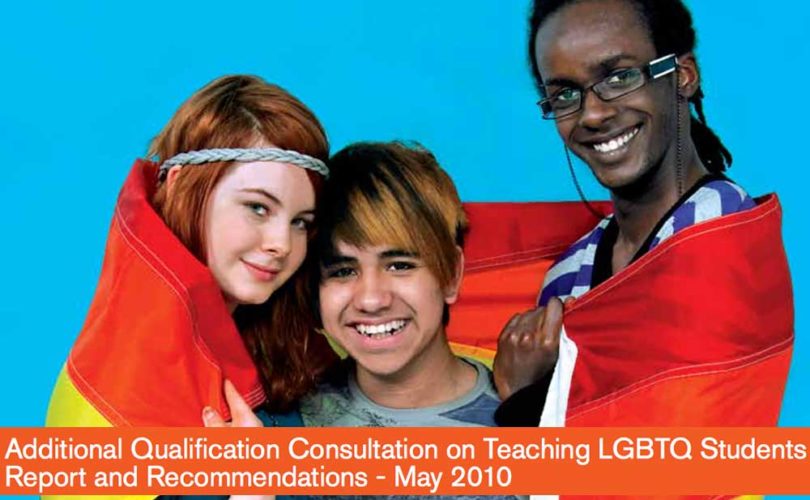 September 4, 2015 (Everyday for Life Canada) – In the September edition of Professionally Speaking, a magazine published by the Ontario College of Teachers announces that a new course for Additional Qualifications (AQ) will made available to the profession on teaching the LGBTQ students. The idea is to train teachers on how to instruct the LGTBQ issues. If parents ever doubted why the Liberal government first introduced the Equity and Inclusive Education Strategy and then Bill 13, the Accepting Schools Act to amend the Education Act, here we have the answer: to teach about and normalize homosexuality and “gender identity.”

The policies and the legislation were never really to just combat bullying, cyberbullying and creating inclusive and safe schools. These are the mere decoy words in order to get to the intended goal. Are the learning needs, in terms of math, science, reading, writing and thinking skills of LGBTQ students, really that different from the majority of students? Ontario schools already have special education programs. And why has “gender” identity become so important in education?

Here let's look at what the Ontario College of Teachers (OCT), this is the provincial professional governing body, tells its members about the new course:

Next year, the College will launch a new Additional Qualification (AQ) course designed to help teachers acquire the knowledge, skills and judgment to effectively respond to the educational needs of LGBTQ students. The College began laying the groundwork for the course content by inviting both teachers and students to share their ideas, concerns and perspectives.

A group of interested teachers gathered this past April to begin the conversation. When they returned to their respective schools, they nominated students to contribute to the next wave of discussions. In May, students from Grades 5 to 12 from across the province gathered at the College’s Toronto office (accompanied by their parents or teachers) to speak candidly and offer their ideas.

Joe Jamieson, OCT, Deputy Registrar for the College, welcomed the students and underscored how their contributions could help create positive change in the education system. 'You are part of something that’s of big importance in the province of Ontario,' he said. 'You are shaping this course for teachers [by helping us with the] knowledge and skills we need to have to be effective teachers for those in the queer community.'

In a large group session, and then in smaller breakout groups, students generated topics of conversation, brainstormed ideas and relayed experiences with representatives from the Egale Canada Human Rights Trust, who helped facilitate the day. The experiences and perspectives students shared will help form the basis for a relevant and effective AQ course. For the students involved, the chance to be heard — and to influence the future — is a welcome and empowering opportunity.

With research complete, a team of teachers will meet in September to take the lessons learned from those sessions and shape them into a 125-hour AQ course, available to College members in 2016, called Teaching LGBTQ Students.

The timing of the AQ reflects an increased cultural awareness of the challenges faced by those within the LGBTQ community. There has also been a social and political spotlight on the issue since the legislative assembly passed Bill 13 into law on June, 19, 2012. The bill (an act to amend the Education Act with respect to bullying and other matters) underscores the critical nature of creating a safe, positive, inclusive school environment, and emphasizes the importance of support at many levels. It reads, in part:

'A whole-school approach is required, and […] everyone — government, educators, school staff, parents, students and the wider community — has a role to play in creating a positive school climate and preventing inappropriate behaviour, such as bullying, sexual assault, gender-based violence and incidents based on homophobia, transphobia or biphobia.'

So, there's a need according to OCT to “to effectively respond to the educational needs of LGBTQ students.” Students themselves will help to develop the course content with the help of the activist group Egale Canada. And Bill 13 will help “in creating a positive school climate and preventing inappropriate behaviour, such as bullying, sexual assault, gender-based violence and incidents based on homophobia, transphobia or biphobia.” Why? Because it's been the law in Ontario since 2012. The magazine reminds teachers of what Bill 13 is supposed to do. It's on page 45:

Ontario students deserve schools that are safe, inclusive and accepting places to learn, and the province is working toward that goal.

The Accepting Schools Act, or Bill 13, requires schools and school boards to prevent bullying, including cyberbullying, by taking preventative measures, issuing tougher consequences, and supporting students who want to promote understanding and respect for all. For example, boards must have policies about equity and inclusive education, the prevention of bullying and progressive discipline.

The legislation, which amends the Education Act, was passed in June 2012. It is part of the government’s strategies to help create safe and accepting schools in Ontario — a necessary condition for student success. (Page 45)

It won't be long before a LGBTQ credit course will be developed for Ontario students. Should any parents disagree with any of this, then it becomes no longer important to create a “safe and inclusive” school climate for their children. Parents must agree either by choice or legal means. This strategy was never meant to be truly inclusive and tolerant. Just the words. The “progressive discipline” aspect of the law can even be used to expel students who oppose these changes.

Yes, punish and instill fear in students and parents that oppose the politically correct position. How else do you explain such a polarized province when it comes to this issue? Where is the “inclusive and tolerant” government that listens to all the people? Why are we all being coerced by policies and the latest government sponsored ads into believing the fluid state “religion” of gender identity and expression? If Ontario were considered a classroom with Wynne as the teacher, how would you rate her instructional leadership? We would give her a mark of “F” for failure.

At a time when parents are having a difficult time getting funds for special education needs, the OCT is making the LGTBQ issues a priority. The current Liberal government has also pushed for the recognition of gender identity in Ontario schools. However, there are other important educational issues to deal with that are lost in all this: student depression, drug abuse, special education and the hurt from broken families. Nevertheless, Ontarians are being told and legally forced to accept sexual orientation, gender identity and gender expression. This in your face approach will only backfire in the long run. Love, truth, acceptance and respect cannot be legislated by those in power. It's earned day by day. And it's freely given because people really care for each other.

In this entry, we have responded to the invitation by OCT for “both teachers and students to share their ideas, concerns and perspectives.” For some reason, we get the feeling that we won't be hearing from the OTC anytime soon.

This article was originally published on the Lou Iacobelli's Everyday for Life Canada blog and is re-published with permission. Lou Iacobelli is a retired teacher from the TCDSB, but still very active in education matters.